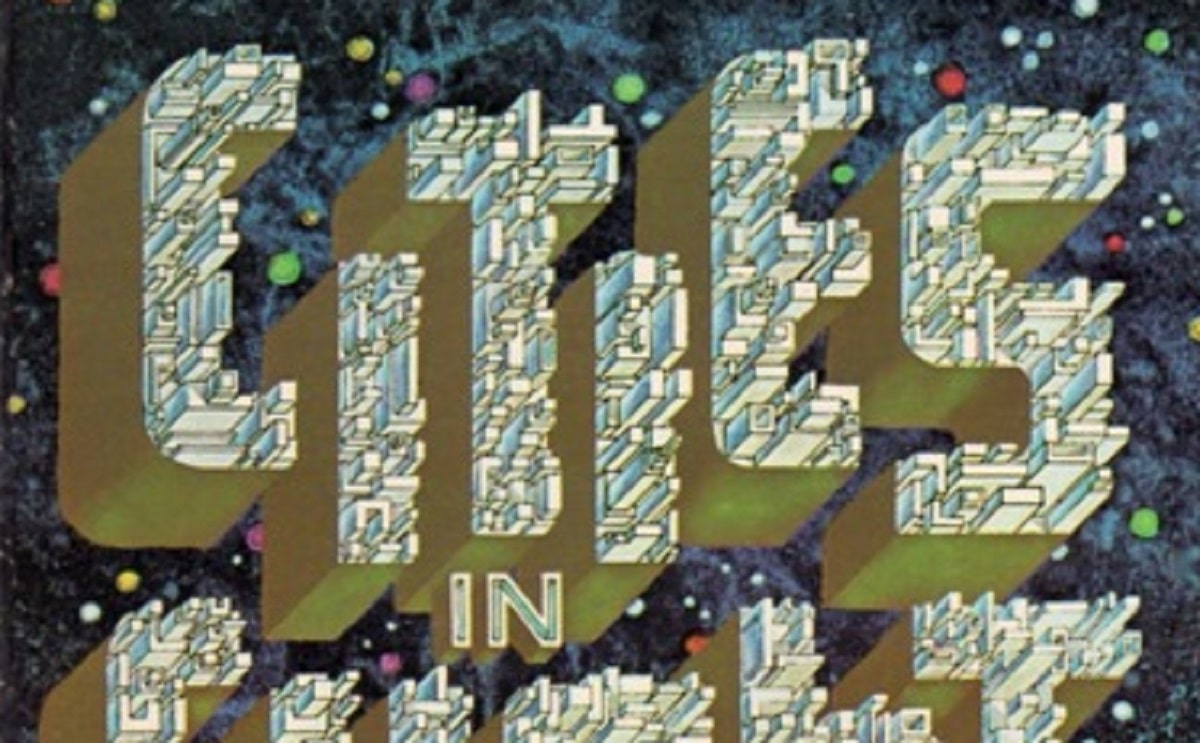 Cities in Flight is an omnibus, first published in 1970, that collects together four novels by James Blish. Those novels themselves were collections of stories that Blish had published between 1950 and 1962.

I initially read Cities in Flight in paperback sometime during the 1970s when I was in my 20s. Now, some four decades later, I’ve re-read a hardcover version of the book, published in 2000.

Of the two books as objects, I much prefer the cover art of the paperback in which each letter of the two main words of the title is a kind of city in flight. The dustjacket of the hardcover suggests an eerie strangeness.

That’s mainly because what intrigued me then about the novel and still intrigues me is the idea of whole cities lifting off from Earth and wandering space like migrant workers or, as they call themselves, Okies.

As a newspaper reporter in the 1970s, I was covering a bunch of Chicago suburbs, each of which had a mayor and some sort of city manager, and, in the final three of the novel’s four sections, the central characters are the mayor and the city manager of the space-travelling New York City.

I’m sure that was part of the reason I read the long novel.

Strange but not eerie

The dustjacket of the hardcover is right to indicate the strangeness of Blish’s story, but it’s a story that isn’t very eerie.

Rather, it’s deeply rooted in science, philosophy, logic and speculation. Any reader who wades into the novel wades into hard science and theory that were way beyond me in the 1970s and remain so today. Several of the pages, indeed, feature formulas, such as this one:

In addition, there is paragraph after paragraph in some sections that were and are gobbledygook to me, such as this portion of one:

“Dr. Bonner calls it the Viconian Hypothesis, or cosmological principle: that from any point in space or time the universe would look the same as it would from any other point, and that therefore no total accounting of the stresses acting at that point is possible unless one assume that all the rest of the universe is to be taken into account.”

I have absolutely no idea what’s being said here. When I’d get to those spots during this re-reading, I’d just skim ahead, trying to get some hint of the gist of the words, and begin reading again once I got to some English I could understand. I’m sure the same was true of the much younger me.

I held onto my paperback copy for all the intervening years, and the reason I did, I suspect, is because of the adventure of the story.

Cities as spaceships, of course, was an unusual plot point. Even more interesting, though, for me then and now, was the reason the cities were able to fly. Well, there were two reasons — one, a hardware thing called a spindizzy which somehow transmuted gravity into blinding speed (or something), and two, anti-aging drugs that permitted the city citizens to live through the long, long, long interstellar journeys.

It was the later that caught my attention — drugs that, while they couldn’t keep you from dying from an accident, could essentially regenerate your body so that your flesh, blood and bones didn’t wear down.

As a 20-something, I’m sure I thought that was peachy keen.

The final two sections take up two-thirds of the novel, and the main characters in those sections live for many hundreds of years.

It’s clear that Blish thinks this is a wonderful state of affairs. Without the specter of death, life for his characters is an endless series of challenges that they face and conquer.

I wonder. I’d get bored.

Don’t get me wrong. I’m not bored with life.

For me, what gives life its tang is the realization that it’s close-ended. It only lasts so long, and then it’s over.

The approach of my death means that every day I have is precious and richly interesting and beautiful and a treasure.

If I knew I could live for century upon century with nothing, except an accident, to keep me from living on and on, would life lose its savor?

(And, by the way, wouldn’t I be hyper-aware of the danger of accident and live in fear of making a false step? This is a question that Blish doesn’t deal with.)

At the novel’s end, every being in the universe has to face the approach of death.

A few of Blish’s characters find a way to go on living — in a manner of speaking — anyway.

It’s a reverse of the Biblical story of creation. Or maybe it’s just a re-telling.

Despite all the formulas and despite my wondering about the boredom that Blish doesn’t confront, I found Cities in Flight well worth re-reading.

Blish works hard to confront important questions, and I enjoyed that.

I also enjoyed reaching across the decades to that 20-something me.

Book review: “Postcards from The Russian Revolution” by the Bodleian Library