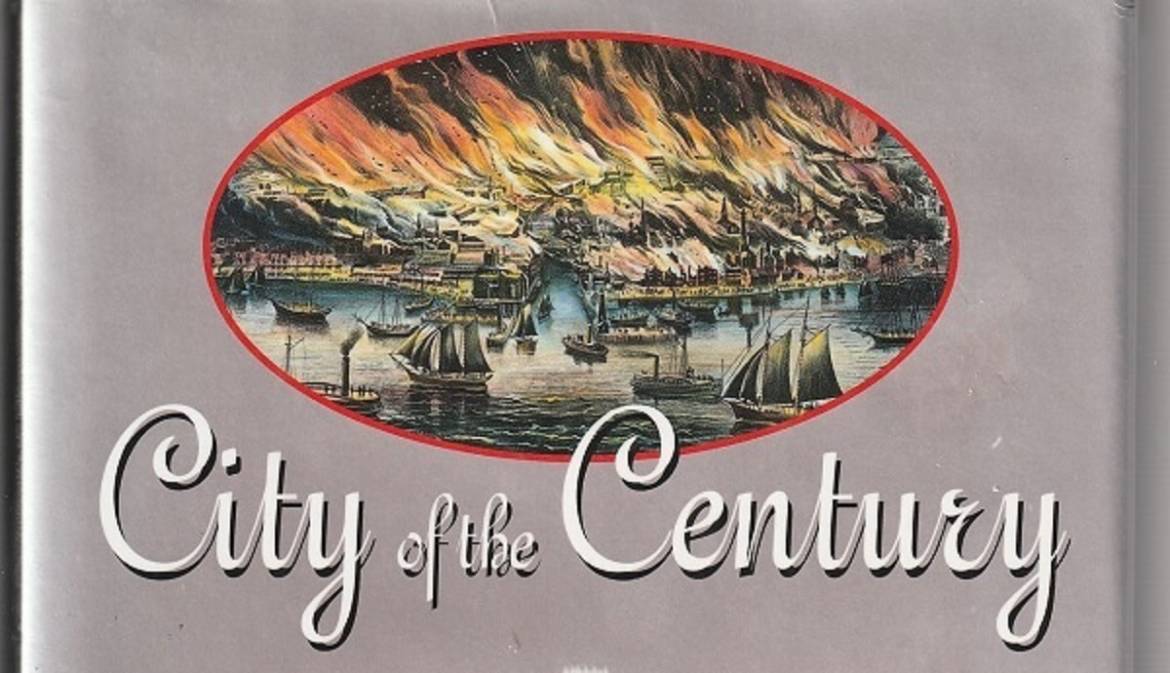 Previous item Poem: How Next item Book review: “The...

For a quarter of a century, I’ve used Donald L. Miller’s City of the Century: The Epic of Chicago and the Making of America, one of the most popular books of Chicago history, as an important resource for my writing.

Published in 1996 by Simon & Shuster, City of the Century is a lively, entertaining and highly readable account of the city from its origins as the brainchild of French explorer Louis Jolliet in the late 17th century to the imposition of a rigid street grid in 1830, setting the stage for the city’s explosive growth over the next six decades.

And from the terrible destruction and human toll of the Great Fire of 1871 (which, nonetheless, came to be seen as a benefit for making possible the resurrection of a new and much better Chicago), to the World’s Columbian Exposition of 1893 and the spotlight it cast on the amazing upstart metropolis that was Chicago.

The book also was the basis of a three-part PBS American Experience series Chicago: City of the Century that aired January 13, 2003.

During my 32 years as a Chicago Tribune reporter, I wrote about urban affairs in all its many facets, and, for background on present-day issues, I frequently would dip into Miller’s book to get a quick grounding on, say, the birth of skyscrapers or the Union Stock Yards or the Haymarket bomb.

Later, when I was writing my book about Chicago’s elevated Loop and how it shaped the downtown and the rest of the city, I found City of the Century a rich treasury of insights.

For instance, Miller’s description of the impact of the street grid was eye-opening for me: “In Chicago, the use of the grid represented the transformation of the land into a mere commodity — real estate — without sacred or civic significance.”  The land as something to buy and sell, like a bar of soap or a load of bricks — that provides an important perspective on Chicago’s history.

Even more pertinent to my research was Miller’s discussion of Charles T. Yerkes, the man who, through chicanery and sheer will, brought about the construction of the elevated Loop.  Like most other writers, Miller paints Yerkes as devious and greedy.  Yet, unlike those, he also writes of the entrepreneur as “a transportation visionary” for his consolidation of the city’s transit system, a key insight for me.

It’s important to point out that Miller, like many historians since the 1950s, erroneously asserts that the downtown got its nickname as the Loop from one or more cable car loops, dating back to 1882.  My book, The Loop: The “L” Tracks That Shaped and Saved Chicago, details, however, that the name came in response to the construction of the elevated Loop and didn’t evolve fully until about 15 years after the elevated structure was in place.

That misstep aside, Miller’s synthesis of the city’s early history was helpful in many ways to me, and, perhaps even more, the sources he listed in his detailed endnotes were a roadmap for further research that was richly rewarding.

Reading from beginning to end

But, in all of this, in all of my use of City of the Century as a source, I had never read it from beginning to end until the past couple weeks.

And what I found was a well-argued, well-written and lucid presentation of a particular kind of history of the city. I also found a book that might have a hard time being published today.

In 551 pages of text, Miller highlights the personal stories of great movers and shakers in Chicago history and uses these stories as entry points into discussions of such less lively subjects as construction techniques and industrial processes.  This approach enables him to provide the reader with a brisk and appealing narrative.

For example, the story of William Butler Ogden, an early Chicago businessman, the city’s first mayor and a key railroad entrepreneur — and the man Miller Identifies as Chicago’s founder — gives him a way of talking about the gambling that men such as Ogden did in their real estate speculations. Similarly, Miller writes much about architects Daniel H. Burnham and John W. Root as a means of discussing the development of skyscrapers, the evolution of Chicago architecture and the planning for the 1893 Fair.

When Miller creates a set piece of 10 pages about the industrialized killing floors of the Union Stock Yards, he employs French novelist Paul Bourget to humanize the account.  Some of the pages feature Bourget’s own words, such as:

Standing by the holding pens next to the pork plant of Armour and Company, Paul Bourget watched a long line of hogs being driven up an inclined chute — the Bridge of Sighs, packinghouse wags called it — to a small opening in the top story of the boxlike building that, when he entered it, gave off an overpowering stench that seized him “by the throat.” [Bourget and his companions then walked] across a sticky floor saturated with a “sort of bloody mud”…

Bourget’s 1895 book Outre-mer: Impressions of America isn’t the only source for Miller’s report.  He also taps into Upton Sinclair’s The Jungle as well as other descriptions, but, to give the scene verve, he frames his account with Bourget’s point of view.

This is a technique that writers use to help readers relate better to their stories.  It’s especially helpful when writing about systems and structures and the nuts and bolts of things.

The problem, as I came to realize as I was reading City of the Century, is that Miller relies almost entirely on well-to-do white men.

Perhaps because of his reliance on these white men, Miller’s history of Chicago is rooted in a belief that the city’s greatness was due to its white male leaders, particularly its businessmen and architects.  Or maybe he started with that idea, and, as a result, researched and told the stories of those white male leaders.

He makes his point many times in City of the Century.  In one example, Miller argues that Chicago succeeded so spectacularly not because of its location at the place where the Chicago River could be linked with the Mississippi River system nor because of Eastern investments and the rich natural resources of the hinterland that the city succeeded.  Rather, because of the driving energy of its business leaders:

The Chicago business elite could have remained tied to the prosperous lake and canal trade it helped to create, as its St. Louis rivals did to the rivre trade; but the businessmen rode their city to economic greatness on that “stupendous agent of prosperity,” the railroad.  Ogden and his circle of investors brought the railroad to Chicago and then sank money in a galaxy of industries dependent on it.  They created the kind of diversified economic base that modern economic theory considers indispensable to a city’s long-term prosperity. They turned Chicago’s promising but indeterminate position in the hierarchy of western cities into a supremacy that only in hindsight seems “inevitable.”

This is a legitimate argument.  Other historians might argue that the success was due more to various social or economic or geographic factors, but Miller uses the materials he gathered to assert the primacy of business leaders.

Those materials are, for the most part, limited to the stories and reports of white men.  Given Miller’s belief that Chicago’s success was due to the business elite, it makes sense that he fills his pages with the companies they founded and the industrial processes they invented and the cultural institutions they created and the buildings they erected.

In doing this, though, he pays little attention to women.  Bertha Palmer, the wife of Potter Palmer, and Harriet Monroe, the founder of Poetry magazine, are mentioned and quoted a bit.  Ida B. Wells, the anti-lynching activist, is pretty much the only black Chicagoan who is noted in Miller’s book.

Jane Addams and the women who worked with her at Hull House receive more attention that any other females.  Their main role, however, seems to be to provide information about Chicago’s immigrants and its poor.  Individual immigrants are rarely mentioned by Miller, except the Irish as corrupt politicians, such as Michael “Hinky Dink” Kenna and “Bathhouse” John Coughlin.

This, it seems to me, is an old style kind of history.  It is an approach that emphasizes events and organizations, laws and plans, profits and losses.  A Great Fire!  A great Fair!  A great industrialist!

The availability of records

Part of the reliance of this approach on the personal stories of the rich and famous is due to the availability of records about such people.  There are memoirs and newspaper stories, corporate records and archived correspondence.

Miller was able to tell a rich and detailed story about the life of Philip Armour, for instance, because there was a lot that had been written about him that could be mined for interesting details. Miller couldn’t tell such a story about, say, my grandfather Patrick Riordan who arrived in Chicago around 1900.  That’s because there was virtually nothing written about him or by him.

Given Miller’s decision to emphasize personal stories as a way of humanizing the historical facts, he has to focus on well-to-do rich men.

The result, it seems to me, is that City of the Century is a history that leaves a lot unsaid.

For instance, who were the immigrants who came to Chicago?  How did the cultural expectations they brought from their home country impact the city and their interactions with other groups?  What was the balance between the opportunities they found in the city and the poor living conditions that were available?

Or consider this:  Roughly half of the Chicagoans during the 19th century were women.  What were their days like?  What was their experience of the city?  And their impact on the city?

Yes, one way of looking at history is to look at events and at decisions by powerful people.

But another way of thinking about the past is to recognize that most people live their lives with much more mundane preoccupations.

Shouldn’t a history of Chicago attempt to tell the stories of all of its people?  What I mean by this is that, to my mind, a history of the city should give a sense of what it was like to be in the city at a certain time.

So, sure, the Great Chicago Fire is important, and the rise of the city’s department stores, and the erection of the city’s skyscrapers.  But also important is what an immigrant like my grandfather found when he tried to make a life in the city.

I want to repeat what I said above.  Miller’s book has been a great resource for my own writing and for my own understanding of Chicago’s history.  It is well-done for what Miller set out to do.

In a true sense, William Ogden wasn’t Chicago’s founder.  Chicago was founded — and keeps being founded — by generations of Chicagoans who, far from the spotlights and headlines, make Chicago the city it is.

That’s the history that needs to be told.

This essay originally appeared at Third Coast Review on 2.13.22.