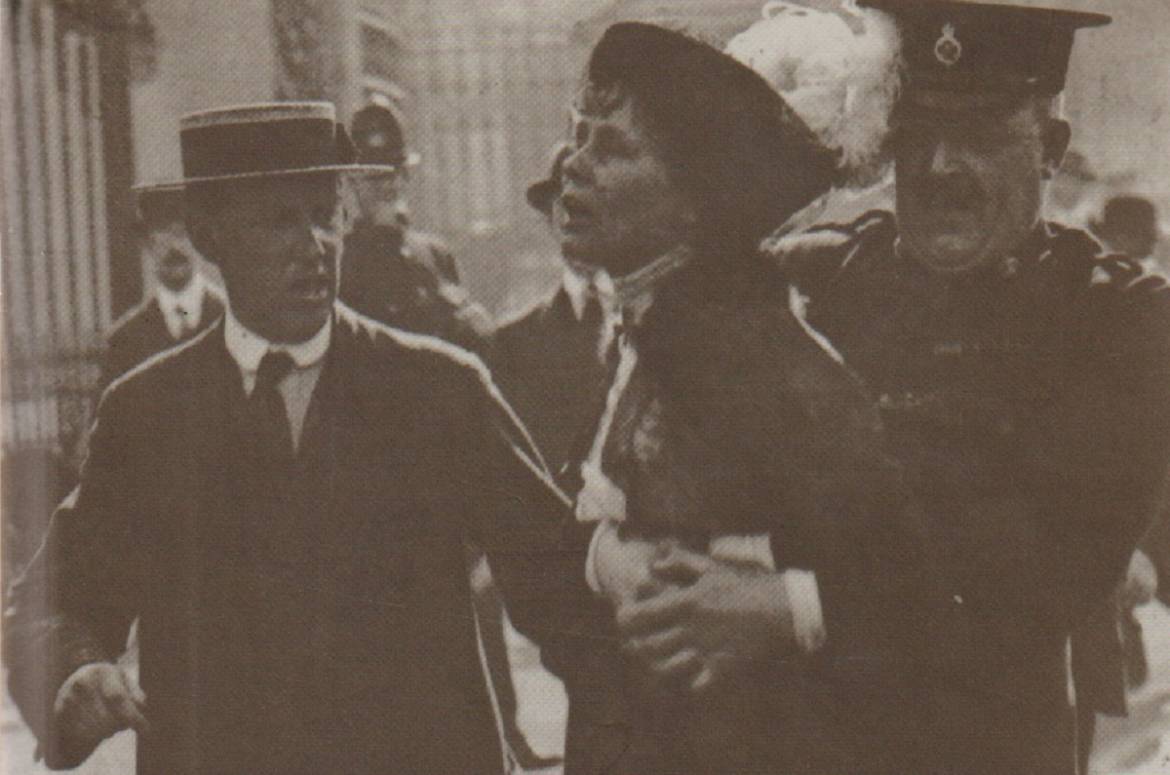 Emmeline Pankhurst was a prim, proper, middle-class Victorian Englishwoman who, on a day in early July, 1914, a few days before her 56th birthday, was rearrested by authorities for her work promoting the campaign to bring the vote to British women.

She was rearrested under what was called the Cat and Mouse Act, a government effort to solve the knotty political problem of what to do when Pankhurst and her followers were arrested and then refused to eat or drink.

These women, the government felt, couldn’t be permitted to go on such hunger strikes (although men were) because think of the bad publicity if a women died this way.  To say nothing about the creation of a martyr.

Violent force-feeding was employed, but that left the women nearly as physically debilitated as the hunger strikes themselves.  In at least one case, an emetic was smuggled into prison in the hopes of causing the force-fed food to be regurgitated.

So, a year earlier, the Cat and Mouse Act had been approved by the House of Commons, the House of Lords and King George V.  Under it, writes June Purvis in Emmeline Pankhurst: A Biography,

“suffragettes or ‘mice’ in a state of poor health could be released into the community to recover sufficiently to be clawed back by the ‘cat’ to complete their sentence.”

“Under the gaze of prison officials”

On this July day, Pankhurst was the mouse.

“Back in the Reception Wing in Holloway [prison], Emmeline was stripped and thoroughly searched, the new rule having been introduced since the attempt to smuggle the emetic to Grace Roe.  Deeply offended by this new procedure and determined to resist, she was charged with being abusive and using offensive language toward the matron and wardresses who searched her, and with striking one of them.”

But that wasn’t all.

“After being subjected to the degrading procedure, during which only indigestion tablets were found, Emmeline lay on the floor, refusing to be helped on with her clothes.”

The result was startling:

“Mrs. Pankhurst, usually so fastidious and personally reticent, lying naked on the floor, under the gaze of prison officials.”

That scene gives a sense of the distance that Pankhurst — and her followers — had come in their commitment to winning the vote for Englishwomen.

This scene, from a century ago, is amazing in its context.

For 21st-century century people in the West, the world is filled with strong, fierce, determined women.

A century ago, women weren’t permitted to do jobs such as those.

A century ago, women were expected to be polite decorous and quiet.

In fighting for the vote in Great Britain, Pankhurst and her followers, including her three daughters, played a large role in changing all of that.

This biography by Purvis is of the everything-and-the-kitchen-sink variety in that it attempts to track monthly, weekly and even daily events throughout much of Emmeline Pankhurst’s life.

In presenting this straight-forward, omnivorous account, Purvis is building the record of her subject’s life.  This becomes the context in which, at various times in the text, she comments on how other writers have interpreted particular actions of Pankhurst and how her own reading of those actions differs.

This, to me, seems a very beneficial service to provide to present-day and future historians.

Emmeline Pankhurst was a key figure in the suffrage movement around the world, highly respected in the United States, for instance.  And it’s helpful to have her story as the central focus of this book.

The context of Pankhurst

It’s also helpful to recognize what this biography isn’t.

Neither is it a history of the amazingly active Pankhurst women — Emmeline and her three suffragette daughters: the oldest Christabel (who worked hand in hand with her mother, often leading), Sylvia (a socialist who broke with her mother and older sister over class issues) and Adela (who, after emigrating to Australia under her mother’s orders, was one of the founders of that nation’s Communist Party).

And this book isn’t an interpretive biography which sets out to use Emmeline Pankhurst as the frame for analyzing the suffrage movement.

All of the above approaches, which have been taken by other writers, are subsumed in Purvis’s story.

Her attention is always on Emmeline Pankhurst.

And who was Emmeline Pankhurst?

She was an autocratic rabble-rouser whose stem-winding speeches inspired a particularly militant brand of suffragette protest, resulting in such things as the bombing of empty churches, the slashing of famous paintings in the National Gallery and the throwing of roof tiles on the Prime Minister’s car.

This was violence that stopped short of injury to people, unlike the later terrorist campaigns such as that carried out by the Irish Republican Army which included not only fatal department store bombings but also the assassination of a member of the royal family, Lord Louis Mountbatten.

Pankhurst never carried out such anti-property violence, but never disavowed it.

Purvis writes that the word one close associate used to describe Pankhurst was “dignity,” and goes on:

“A small, slender woman who wore delicate kid shoes of size three and a half, Emmeline would stand on the platform looking poised and elegant in a dress of dark purple or black.  The impact of her physical persona was immediate.  She had an air of authority and although no longer young was still beautiful.  Her pale face, with its delicate square jaw and rounded temples ‘recalled the pansy by its shape and a kind of velvety bloom on its expression.’

“She captivated her audience by her apparent contradictions.  Her fragile appearance belied a forcefulness, a driving energy, not usually associated with women described, as she was, as ‘so feminine.’ Her radical words contrasted with her appearance as a middle-class, law-abiding widow and mother.  The power of her oratory was well known and commented upon by friend and foe, alike.

“She was vibrant, asserted Rebecca West; one felt, as she lifted up her hoarse, sweet voice that she was ‘trembling like a reed’ but the reed was ‘of steel and it was tremendous.’”

In July, 1914, when Emmeline Pankhurst was stripped nude in prison, there were more than the usual reasons for the government to be angry with her.

Two months earlier, she had led a demonstration of 100 women to the gates of Buckingham Palace where a burly policeman picked her up bodily and carried her to a waiting car. The photograph of “the frail-looking Emmeline Pankhurst, lifted off the ground, her face writhing in pain” — used on the cover the Purvis’s biography — became the most famous image of the suffragette movement.

She may have looked delicate.  But she was fierce — fierce enough to help change the world.