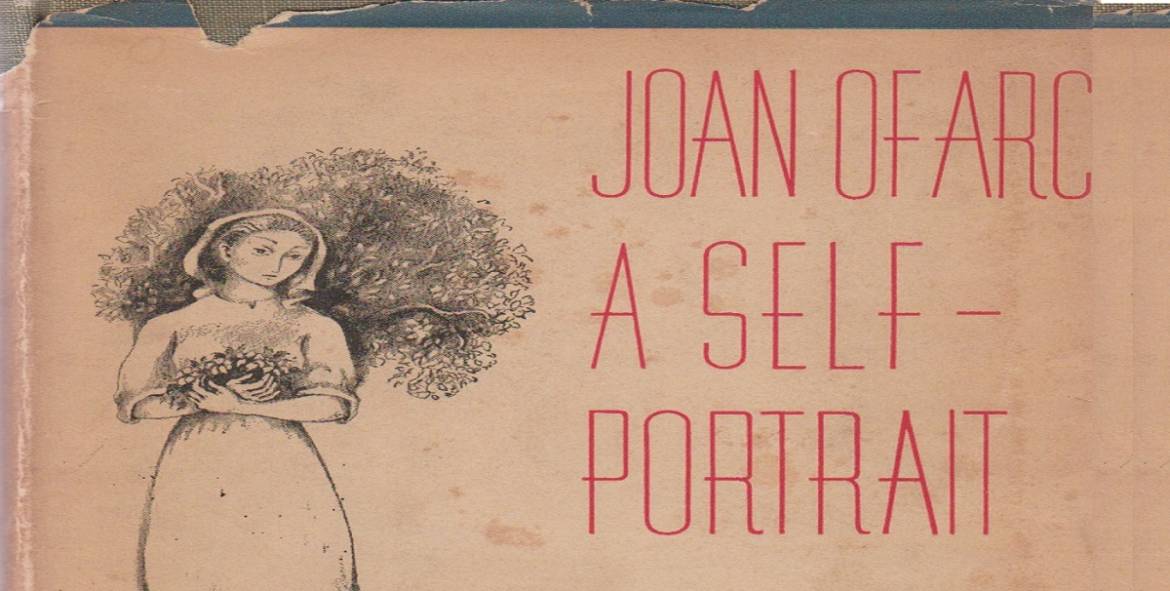 As Willard Trask notes in the Foreword to his 1936 book Joan of Arc: A Self-Portrait, we know the Catholic saint and liberator of France today — 600 years after she was burned at the stake — in a deep and telling and very unusual way.

That’s because her actual words and phrases were captured by clerks in two voluminous court records. The first was from her rigged heresy trial. The second was from her nullification trial, held a quarter of a century after her martyrdom at the hands of the English and their allies.

The record of the trail contains Joan’s responses to the prosecutors and judges, and the two records hold the recollections of her contemporaries regarding what she said to them or in their hearing during her short 19-year-long life. Trask writes:

The possession of these documents places us in an unique position with respect to Joan: we can hear her speak.

We have not only what she would tell us, but her very words, in a way that we cannot be sure we have the words even of those who live for us chiefly in what they have spoken — Socrates, say, or Saint Francis.

The wealth of detail of autobiography which (the trial and retrial records preserve) is astounding.

Indeed, Trask set out to make that autobiography more explicit by pulling Joan’s quotes from the records and putting them in chronological order to provide a way of Joan her life story in her own words.

A lack and an addition

Before I go further, I want to mention that I have two copies of Trask’s book — the original from 1936 as well as a paperback version, published in 1996 and titled Joan of Arc in Her Own Words.

The odd thing is that, for no reason I can conceive, the 1996 paperback doesn’t include Trask’s short foreword. It’s a lack, but not a major one. Just kind of odd.

What the paperback does have is an Afterword — which is actually a chapter from the still popular and influential 1851 book The Fifteen Decisive Battles of the World by Sir Edward Shepherd Creasy.

It’s his chapter on Joan’s victory over the English at Orleans in 1429. It’s an interesting, although not essential, addition.

“Go in boldly myself”

A proper mid-19th century Englishman, Creasy was not exactly what you’d call a feminist. Indeed, he seems to have the idea that Joan was victorious without really knowing what she was doing, calling her an “unconscious heroine.”

Her impact, though, was enough to change the course of history and gain the battle at Orleans a sport on Creasy’s very short list. With the victory, Joan “rescued her country from becoming a second Ireland under the yoke of the triumphant English.”

[Joan] came to lead the troops of France, who looked with soldierly admiration on her well-proportioned and upright figure, the skill with which she managed her war-horse, and the easy grace with which she handled her weapons…

Her tactics in action were simple enough. As she herself described it — “I used to say to them, ‘Go boldly in among the English,’ and then I used to go in boldly myself.”

One final note before going to Joan’s words.

Trask doesn’t try to re-tell the detail of the saint’s life. If you don’t have a general sense of the story of Joan and her voices and her victories and her martyrdom, this book isn’t the place to start — although I suspect that, even knowing nothing, a reader would get the sense of Joan as a very definite personality of strength and wit and faith.

One of a kind

Below are a group of quotes from Joan from Trask’s book. They hint at the richness of his work and her words. She was one of a kind.

“As long as I lived at home, I worked at common tasks about the house, going but seldom afield with our sheep and other cattle. I learned to sew and spun: I fear no woman in Rouen at sewing and spinning.”

“King of England; and you, Duke of Bedford, who call yourself Regent of the Kingdom of France; you, William de la Pole, Earl of Suffolk; John, Lord Talbot; and you, Thomas, Lord Scales, who call yourselves Lieutenants to the Duke of Bedford: Give satisfaction to the King of Heaven; give up to the maid, who is sent hither by God, the King of Heaven, the keys of all the good towns in France which you have taken and broken into. She is come here by the order of God to reclaim the blood royal. She is quite ready to make peace, if you are willing to give her satisfaction, by giving and paying back to France what you have taken. And as for you, archers, companions-in-arms, gentlemen and others, who are before the town of Orleans, return to your own countries, by God’s order; and if this be not done, then hear the message of the Maid, who will shortly come upon you to your very great hurt….”

Regarding a frightened priest:

“The people of Troyes, I think, sent Friar Richard to me, saying that they doubted whiter I was sent by God.   And when he came out, he came towards me making the sing of the cross and sprinkling holy-water. And I said to him, ‘Come on bravely, I shall not fly away.’ ”

When meeting a woman named Catherine who asserted that, because she was getting visions of a beautiful woman, she could find treasure:

“And I told her to go back to her husband, and do her housework and bring up her children.”

When asked by prosecutors if St. Michael was naked when he came to her in a vision:

“Do you think that God has not wherewithal to clothe him?”

On the morning of her execution:

“Alas! Am I so horribly and cruelly used, that my clean body, never yet defiled, must this day be burnt and turn to ashes! Ha! Ha! I would rather be beheaded seven times that suffer burning.”

As the flame engulfed her: