For students of westerns — or writing of any sort — the first forty pages of Elmore Leonard’s Last Stand at Saber River are a masterful exhibition of how to ratchet up tension with each story-twist to an almost excruciating crescendo.

Similarly powerful, but for a different reason, are twenty-eight pages near the novel’s end when a showdown at the cabin of Paul Cable turns into a relentless, breathless chase through woods and up desolate hillsides, pitting two men bent on murder against one with a single bullet in his Colt .44.

For their purpose, these scenes are as good as any Leonard wrote in a career that spanned nearly sixty years and included 45 novels.  And it’s striking that they are in this 1959 novel, just the fourth Leonard published. 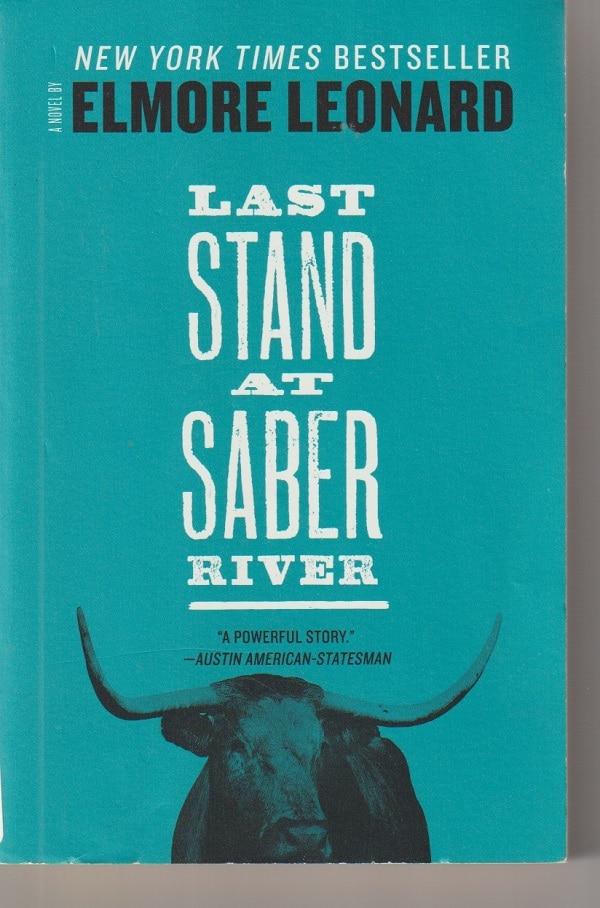 How to construct a novel

Perhaps it’s the power of these scenes that’s responsible, but the rest of Last Stand at Saber River seems almost unfocused, stumbling along with probably more highlighted characters than needed and an excess of backstory, particularly an excess of flashbacks.

It is as if Leonard who’d made a middling career as a short story writer over the earlier years of the decade hadn’t quite figured out how to construct a novel — in this case, the story of Cable, returning injured from fighting for the Confederates during the still-raging Civil War to bring his wife and three small children back to their home cabin and farm, only to discover that a Union horse dealer, Vern Kidston, had laid his own claim to them.

Still, maybe Leonard was savvier than I’m giving him credit for.

Much of the rest of his novel may seem a bit fuzzy because of two characters who, each individually, set out to make things fuzzy.

The one is Lorraine Kidston, the niece of Vern, a spoiled, motherless girl of 18, enamored of her own attractions and hot for the well-married Cable.

Her shenanigans, though, turn out to be little more than stupid, minor distractions.

Not so with the other character, Edward Janroe, a bitter, one-armed survivor of the war who is now running rifles for the rebels and is, almost assuredly, certifiably insane.

“I saw an animal in the dream, like a small wolf or a coyote, and it was slinking along in the moonlight.  The chicken was feeding on the ground and before it could raise its head, the animal was on it and tearing it apart with its teeth and eating it even while the chicken was still alive…And at that moment I ran from him screaming.  I knew it was the face of Mr. Janroe.”

The reader knows the wrinkles and fissures of Janroe’s madness because Leonard tells, at several points, what this character is thinking and why he takes the actions he’s taking.

The other characters don’t know.  All they comprehend is that they are moving through a fog of events that aren’t particularly clear but seem to show dread dangers.

As with Janroe, Leonard brings the reader inside the thoughts of various characters, a technique that was already giving his novels a psychological depth missing from most westerns, hackneyed as they are with good guys, bad guys and women in peril.

Leonard, at this early date, also goes against genre expectations by giving strong, active roles to his female characters.  Indeed, the last stand at the end of the novel — and of the title — comes to an end through the action of one of the women.

The Last Stand at Saber River may be imperfect, but it’s a meaty book for anyone sick of clichés and hungry for a good story.

Book review: “How We Die: Reflections on Life’s Final Chapter” by Sherwin B. Nuland