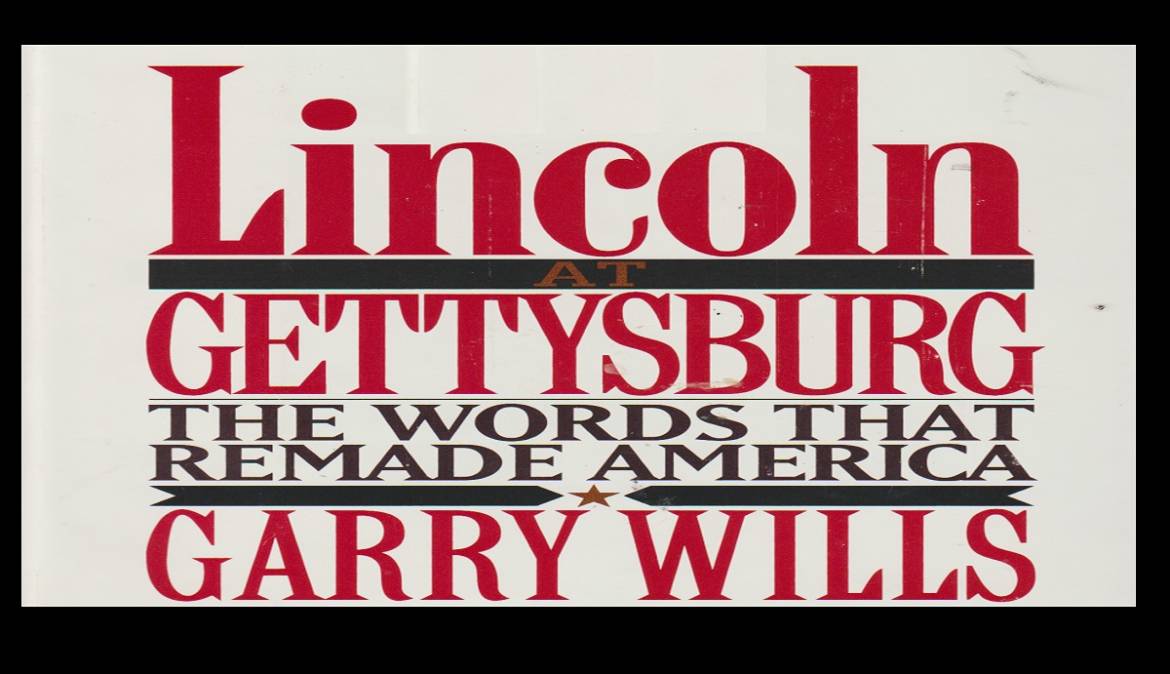 Previous item Book review: “One Crazy... Next item The nine best books of 2017

Book review: “Lincoln at Gettysburg: The Words That Remade America” by Garry Wills

Make no mistake: Abraham Lincoln’s Gettysburg Address was a refounding of the United States.

A redefinition of the nation — a revolution, if you will.

It was the substitution of the Declaration of Independence with its clear, direct, unequivocal statement that “all men are created equal” as the country’s central document, in place of the U.S. Constitution with its acceptance of slavery and, in consequence, a lesser ideal.

It was a clear commitment to the principle of equality after a half century of intellectual muddiness.

And, as Garry Wills explains in his 1992 book Lincoln at Gettysburg, it was a revolution that was carried out in the space of three minutes and in the speaking of 272 words.

A revolution carried out, peacefully, through logic, political genius and language that has resonated ever since through American history and culture — a revolution in thought and spirit, conveyed in what were billed simply as “remarks” at the dedication of the new cemetery for the Union dead from the Battle of Gettysburg, the turning point of a fiercely fought civil war in which body counts reached into the hundreds of thousands on both sides.

“To clear the infected atmosphere of American history”

Lincoln sought, Wills writes, “to clear the infected atmosphere of American history itself, tainted with official sins and inherited guilt.” Those sins and guilt were the practical compromise that had been reached in the creation of the Constitution which accepted slavery as part of the American way of life.

Lincoln’s entire life had led him to this moment, his thinking about the political foundation of the nation refined in public debates and private musings. His Gettysburg Address was a political tour-de-force, a literary masterpiece and a channeling of what was — and still is — best, most hopeful and most decent in the American spirit.

In the seeming modesty of simple remarks, Wills writes, Lincoln “performed one of the most daring acts of open-air slight-of-hand ever witnessed by the unsuspecting. Everyone in that vast throng of thousands was having his or her intellectual pocket picked.”

What Lincoln had done was to redefine the Constitution in light of the Declaration of Independence.

True, the Constitution — for the moment — still accepted slavery. But, in Lincoln’s view and in the view he now imposed on the nation through force of logic and language, the Constitution’s acceptance of slavery was only temporary.

It was something bad that would need to be excised sooner or later. It was not, as previous generations had gladly or sadly accepted, an unchangeable element of the country’s character.

The crowd departed with a new thing in its ideological baggage, that new constitution Lincoln had substituted for the one they brought there with them. They walked off, from those curving graves on the hillside, under a changed sky, into a different America. Lincoln had revolutionized the Revolution, giving people a new past to live with that would change their future indefinitely.

Not that people didn’t realize what Lincoln had done. Certainly, there were voices raised immediately, calling the speech and its refocusing of the national ideal a betrayal. The Chicago Times fulminated:

“It was to uphold this constitution, and the Union created by it, that our officers and soldiers gave their lives at Gettysburg. How dare he, then, standing on their graves, misstate the cause for which they died, and libel the statemen who founded the government? They were men possessing too much self-respect to declare that negroes were their equals, or were entitled to equal privileges.”

And voices have been raised down the decades. Some have tried to pretend the Gettysburg Address was simply a banal assortment of commonplace ideas, nothing special. Others, though, have recognized its revolutionary nature, especially given the reverence that has been — and still is, and probably always will be — accorded to the speech as a core statement of the American idea.

“Abraham Lincoln and, in considerable degree, the authors of the post-Civil War amendments, attempted a new act of founding, involving concretely a startling new interpretation of that principle of the founders which declared that “all men are created equal.”

“What can rebuttal do to incantation?”

Wills argues that those such as Kendall who seek to refute Lincoln’s radically new interpretation of the nation — now, not new at all; indeed, part of the basic understanding of most Americans of their nation and its bedrock principle — have a difficult time because they are working “against the values created by the Gettysburg Address.”

Think about it: Lincoln at Gettysburg created values. He expressed the value of “all men are created equal” in such a way that, instead of one of the nation’s principles, it became the nation’s core value.

Ideas have weight. Language has power. Lincoln’s idea — presented in words and phrases of beauty, clarity and revelatory insight — created this new value.

It is a value that has become, for most Americans, part of their sense of the nation and its promise. The foundation of the nation. Indeed, Wills writes:

Lincoln distilled the meaning of the war, of the nation’s purpose, of the remaining task, in a statement that is straightforward yet magical. No wonder the Chicago Times chafed impatiently at the Gettysburg Address. Lincoln argues, but he also casts a spell, and what can a rebuttal do to incantation?

The value that Lincoln created has resonated through American discourse ever since. It has been at the heart of waves of civil rights movements for equality — for blacks and Hispanics, for those of any sexual orientation, for women, for the disabled, for the poor.

[The Gettysburg Address’s] deceptively simple phrases appeal to Americans in ways that Lincoln had perfected in his debates over the Constitution during the 1850s. During that time Lincoln found the language, the imagery, the myths that are given their best and briefest embodiment at Gettysburg….

Without Lincoln’s knowing it himself, all his prior literary, intellectual, and political labors had prepared him for the intellectual revolution contained in those fateful 272 words.

To understand the impact of those 272 words then and now, Wills examines a variety of factors:

It is clear that, for Wills, the idea that Lincoln was able to express at Gettysburg is transcendent. At the same time, he finds Lincoln’s language incandescent in its combination of poetic compression and soul-stirring clarity.

He calls the address an “astringent speech,” one “as chaste and graven…[as] an Attic frieze.” It is one that has a “telegraphic quality — the omission of most coupling words.” {Compare the speech to the best of the telegrams Lincoln sent to his commanders and that U.S. Grant sent to Lincoln.]

Yet, the address, as short as it was, featured many techniques that inter-locked its sentences and ideas, and made it easy for the listeners that day — and readers down the decades — to take in without confusion.

For instance, Wills notes that one such linking process took place almost subliminally,

by the repeated pinning of statements to that field, those dead, who died here, for that (kind of) nation. The reverential touching, over and over, of the charged moment and place leads Lincoln to use “here” six times in the short text, the adjectival “that” five times, “this” four times.

The spare vocabulary is not impoverished because of the subtly interfused construction, in which Charles Smiley identifies “six antitheses, six instance of balanced sentence structure, two cases of anaphora, and four alliterations.” “Plain speech” was never less artless.

Particularly telling are the linkages that Wills finds throughout the speech, as the text below illustrates:

His book, which won the Pulitzer Prize for non-fiction in 1993, is itself an important document of American history.

It is a book of deep understanding, craft and insight into what was and remains the most important speech in American history.