Logan’s Run, published in 1967 by William F. Nolan and George Clayton Johnson is a clever science-fiction novel about a world that has been twisted out of shape by the solution to a catastrophic problem.

The problem was the over-population of the Earth, and the solution was an age cut-off — in the most literal way.

On the 21st birthday, Lastday, the crystal goes black, and people report to a Sleepshop to be blissfully euthanized.  There is one unofficial alternative — to run, to flee in the hope of finding the long-rumored Sanctuary.

It’s now the year 2116, and Logan 3 is a Sandman, a kind of cop who chases down runners and shoots them with a Gun that seems to disintegrate them from the inside out.

He’s good at his job, but there’s a complication.  His crystal is about to turn black.

So, on his Last day, he makes a break for it along with a woman also near her Lastday, Jessica 6. 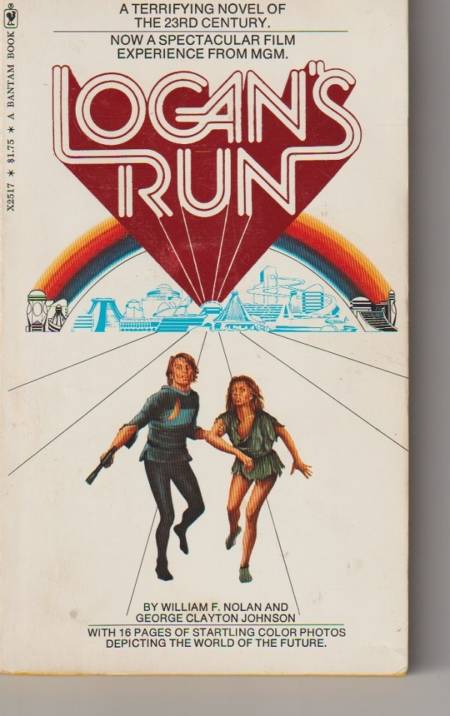 The two of them are being hunted by a superstar Sandman, but there’s a question throughout much of the novel:

Is Logan only running to discover the secret of the Sanctuary as a way of winning more life from the mountain-filling computer that oversees everything?

And who is this superstar Sandman?

And who is helping Logan and Jessica escape?

Nolan and Johnson use this plot opener to send Logan and Jessica through a series of weird places across the globe, including a deep-sea food-processing center called Molly and an icy prison called Hell, the Crazy Horse mountain with its failing computer and a wide open prairie controlled by motorcycle-riding gypsies, hungry for sex.

There is an uneven quality to these scenes.  Maybe some were written by Nolan and some by Johnson.  For whatever reason, some are more interesting in terms of speculative imagination.

Most interesting for me was a three-and-a-half page set-piece about the Little War between the young and the old which led to the decision to get rid of everyone at the age of 21.

Logan’s Run was used at the basis for a 1976 film of the same name which cut so much of the book’s material that it is fairly chaotic.

Also damaging to the movie are the sets and special effects which look extremely cheesy today and can’t have seemed very realistic four decades ago.

Today, half a century after it was published, Logan’s Run is a curiosity.

As a science fiction novel, it’s clever but only adequate in its story-telling.  That’s how it seems today, but I don’t think it was any great shakes back in 1967.

What makes the book work despite its problems and awkwardness is that concept of a euthanasia program for anyone 21 and older.  I was 17 in 1967, and many young people then just wished the old people (over 30) would get out of the way.