Among Terry Pratchett’s 41 Discworld novels, Men at Arms, published in 1993, is one of the best.

Pratchett’s books are always great fun, filled with wit, satire and wise insights into those creatures called human beings, in a broad manner of speaking — which is to say, including dwarfs, trolls, ghouls, and just a whole lot of sentients.  Pratchett never wrote a bad novel.

Men at Arms is special for a great many reasons.  For one thing, it features the reappearance of Sam Vimes, the grizzled, street-smart, soft-hearted copper, who first appeared in Guards! Guards! in which he saved the life of a rich dragon-protecting heiress and, oh my gosh, fell in love.

Now, they’re about to get married (which is obviously a good thing), and Sam is about to retire from the City Watch to lead a life of leisure among rich people who, in their snobbiness, stupidity and prejudice, make his skin crawl (which, also obviously, is not a good thing).

A lot happens in Men at Arms because Sam Vimes is Sam Vimes, and that’s a very good thing.  Among all of Pratchett’s Discworld characters, I think I like him maybe the best.

Carrot, who cannot tell a lie and has not a good grasp of the use of the comma and is simple (in a very complicated way), is a delight every time he appears on the page, especially when, somewhere nearby, is Lance-Constable Angua von Überwald.

She’s always delightful when she’s on a Pratchett page, particularly now at the start of her City Watching career, when the Watch is making an affirmative-action push, signing up all sorts of beings, but she’s a special case as everyone wants to note:

As Carrot finds out on their way to — aw, c’mon, anyone who starts reading this book is going to spot this plot turn coming from the moment these two appear together — falling in love.

Pratchett handles goofy-happy-true-love well, with Sam Vimes and Sybil Ramkin, with Carrot and Angua.  He’s smart enough not to have it in a lot of his books, and Men at Arms is great fun because there are two loopy couples.

And there’s Gaspode the talking dog.  And the Patrician.  They are among Pratchett’s best characters, as well.

And, as an ensemble, the City Watch members are A-1.

I enjoy all of the Pratchett books, but I most enjoy the City Watch books — more than those that focus on the Wizards, and the ones on the Witches, and on the Industrial Revolution, and on the Gods, and on Tiffany Aching, and on DEATH.

Wait, actually, I think DEATH is my favorite Pratchett character.

Then, Sam Vimes or maybe Carrot.

DEATH, of course, appears in all but one of the Discworld novels, but there are several that have him as the central character, and I really like them.

Maybe more than I like the City Watch books. Well, certainly more. 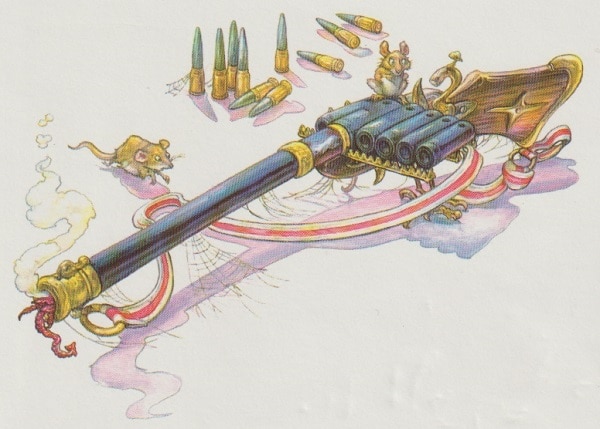 Anyway, Men at Arms has so many of Pratchett’s great characters: Sam Vimes, Carrot, Angua, Gaspode, the Patrician, the City Watch gang and, yes, DEATH.

And it’s about the “gonne” — something that, clearly, Pratchett was incensed about.

The gonne has a mind of its own, and people die or are wounded all over the place —by accident, by murder and by sniping, and Pratchett doesn’t like it at all.

It would be interesting to go through the Discworld novels to figure out what things Pratchett saw as true evil.  Prejudice is one of those.  Greed is another.  The gonne and guns of all sorts is, for him, one of the most evil.

Of course, so is the oppressiveness of the rich, at least, all except those rich who aren’t venal.  For instance, Pratchett writes that Sam Vimes hadn’t had much experience with the rich and powerful:

“Coppers didn’t, as a rule.  It wasn’t that they were less prone to commit crimes, it was just that the crimes they committed tended to be so far above the normal level of criminality that they were beyond the reach of men with bad boots and rusting mail.

“Owning a hundred slum properties wasn’t a crime, although living in one was, almost. Being an Assassin — the Guild never actually said so, but an important qualification was being the son or daughter of a gentleman — wasn’t a crime.

“If you had enough money, you could hardly commit crimes at all.  You just perpetrated amusing little peccadilloes.” 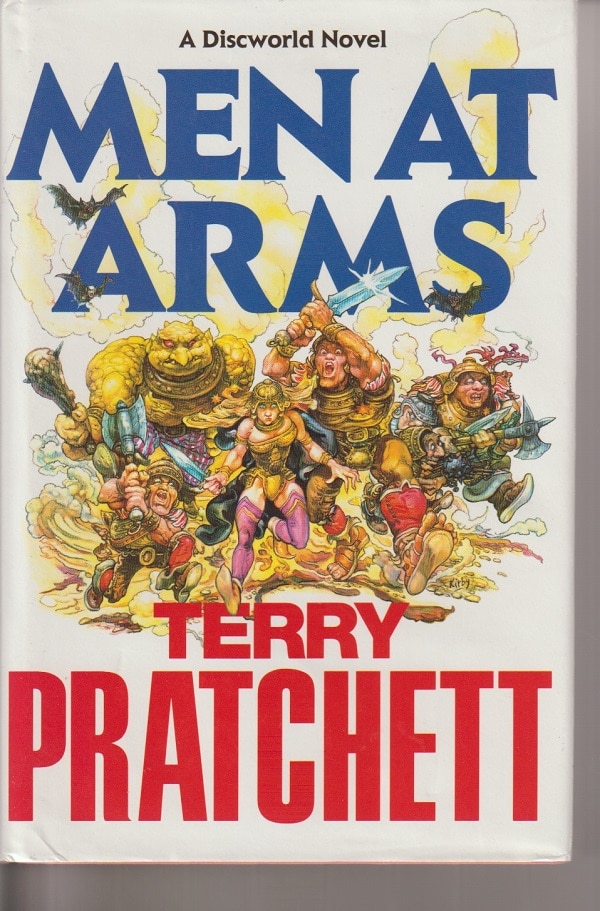 In Men at Arms, Pratchett is in high form in the humor department. Such as his footnote on a discussion of thievery in Anhk-Morpork:

*Fingers-Mazda, the first thief in the world, stole fire from the gods.  But he was unable to fence it.  It was too hot.**

**He really got burned on that deal.

But most of Pratchett’s humor has an edge to it, an edge of looking at the mundane and seeing the loony-ness beneath, such as with clowns (who play several significant parts in Men at Arms):

“No clowns were funny.  That was the whole purpose of a clown.  People laughed at clowns, but only out of nervousness.  The point of clowns was that, after watching them, anything else that happened seemed enjoyable.  It was nice to know there was someone worse off than you.”

To most other dogs, Gaspode is worse off.  Gaspode is a real mutt, and a smallish, battered mutt, at that.  But, as a dog who can talk, he has the Power as he displays when he is facing a circle of mad canines ready to chew the life out of him:

“A dog scraped the ground with its paw…

“Gaspode took a deep breath and adjusted his jaw.

“The command bounced back and forth around the alley, and fifty per cent of the animals obeyed.  In most cases, it was the hind fifty per cent.  Dogs in mid-spring found their treacherous legs coiling under them —

“—and this was followed by an overpowering sense of racial shame that made them cringe automatically, a bad move in mid-air.”

Someone else who is worse off than most other people is Leonard of Quirm (a kind of Leonardo da Vinci), the inventor of the gonne and lots of other stuff.

His problem? Inspirations.  As Pratchett explains:

“Inspirations sleet through the universe continuously.  Their destination, as if they cared, is the right mind in the place at the right time.  They hit the right neuron, there’s a chain reaction, and a little while later someone is blinking foolishly in the TV lights and wondering how the hell he came up with the idea of pre-sliced bread in the first place.”

As an inventor, Leonard has a mind that is particularly sensitive to this rain of inspiration, and he never knows when he’s going to awaken to find “sketches of unfamiliar siege engines and novel designs for apple-peeling machines” that he’s worked up in the middle of the night.

I suspect that, as a novelist, Pratchett had a good sense of Leonard’s difficulties.

His books, particularly Men at Arms, are inspired lunacy, social observation and deep sensitivity to the wide and wild fobiles of those called human beings (no matter their genus).  They are, simply, inspired!

Book review: “The Faces of Jesus: A Life Story” by Frederick Buechner