Norwood, the first novel by Charles Portis, is a wry, sweet, kindly novel that follows Norwood Pratt, ex-GI and decent enough car repairman, on a meandering, low-stress odyssey across the U.S. from Camp Pendleton, outside San Diego, to his home in Ralph, Texas, and, eventually, back on the road in a too-good-to-be-true car (it was), heading to collect a $70 debt in New York City, and then on a bus back south, on which he meets Rita Lee, the love of his life; a brilliant though bedraggled chicken; and a world-weary ex-circus midget, before ending up back in Ralph.

Nothing much happens, except, of course, that falling-in-love bit which is low on romantic lighting and high on goofy compatibility.  But plot isn’t all that important in this 1966 novel that is a cousin to the sort of book that, at that time, Elmore Leonard was just starting to write although, unlike Leonard, without any sort of genre hook.

You could call the novel “loopy,” and that would be true enough, although not in any pejorative sense.  It’s more “looping,” like the ambling walk of a good old boy at peace with himself and the world. 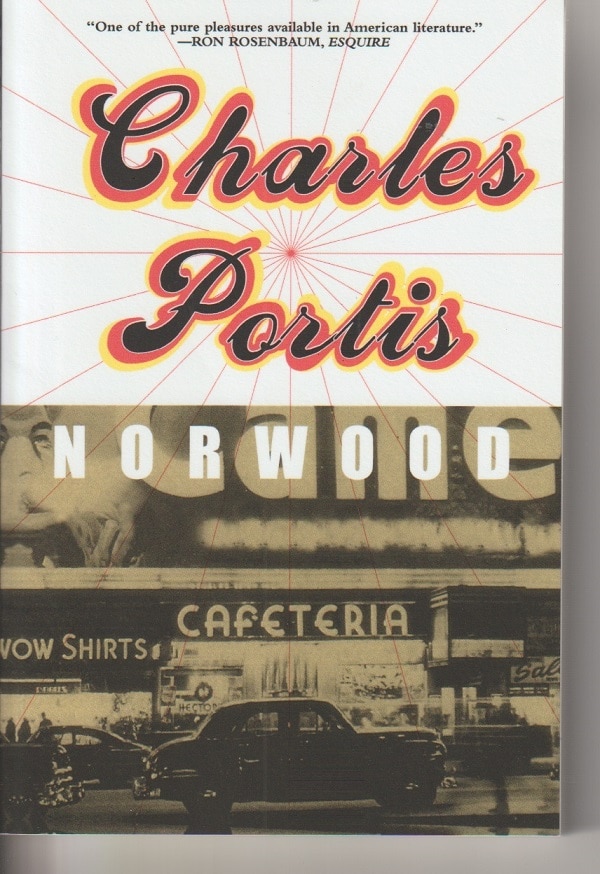 You might call it — well, here, these things will give you a sense of what kind of a novel Portis wrote:

Not what you’d expect

These are not incidents and observations you’d expect to find in a Tolstoy novel or one of Emily Dickinson’s poems.

Or, for that matter, in any of the bestselling books of 1966, such as The Chosen by Chaim Potok or Ariel by Sylvia Plath or Tai-Pan by James Clavell or The Crying of Lot 49 by Thomas Pynchon or Valley of the Dolls by Jacqueline Susann or The Source by James Michener.

Portis followed Norwood up two years later with True Grit, a novel that was similarly built around the voice of its central character and a work so successful that it was made into two well-received film versions in 1969 and 2010.

He wrote only three other novels, publishing the last Gringos in 1991 at the age of 58.  He died in February of this year.

That’s too bad.  The world can always use more novels about the taste of squirrel brains.