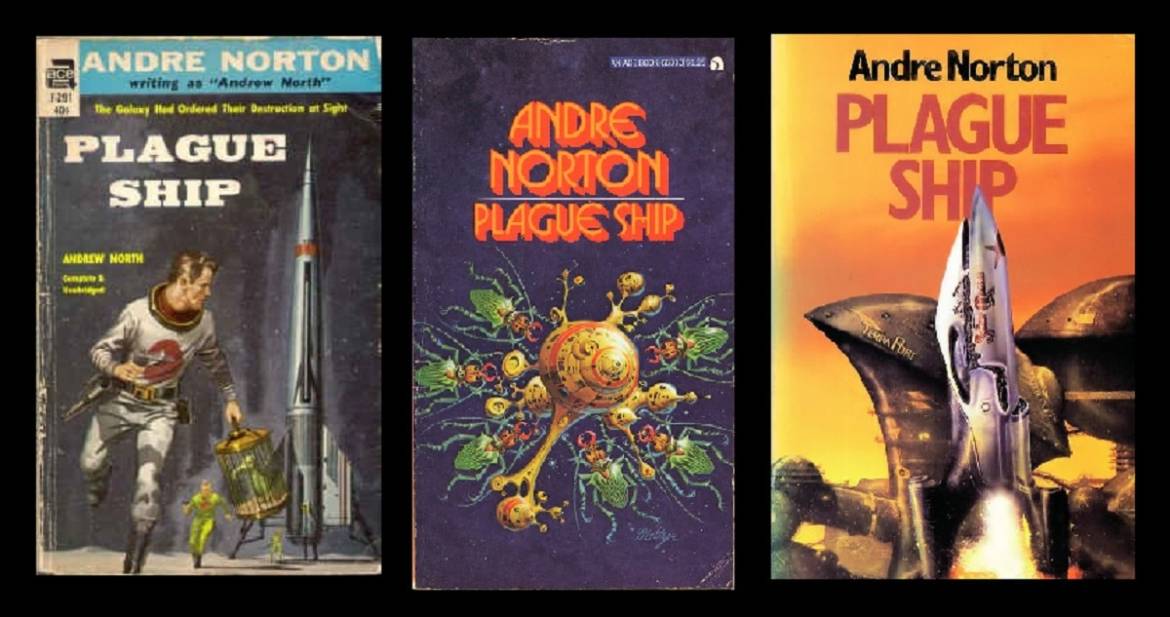 Andre Norton’s 1956 Plague Ship is a rip-snortingly inventive yarn that’s one of her better novels, a combination of medical mystery, anthropological adventure and space gallop.  And it features a rare guest appearance by the Earth, or Terra as Norton, like most sci-fic writers, calls it.

Indeed — in one of those science fiction moments that, for the character, represents a look at an horrific past while, for readers, especially those in the 1950s, it calls to mind a possibly horrific future — the Solar Queen trading ship lands on Earth in the Big Burn.

The Big Burn was the horrible scar left by the last of the Atomic Wars — a section of radiation poisoned land comprising hundreds of square miles — land which generations had never dared to penetrate. Originally the survivors of that war had shunned the whole continent which it disfigured. It had been close to two centuries before men had gone into the still wholesome land laying to the far west and the south. And through the years, the avoidance of the Big Burn had become part of their racial instinct as they shrank from it. It was a symbol of something no Terran wanted to remember.

Or, for the reader at the dawn of the atomic age, a symbol of something no human being wanted to have to face.

The Salaricki and the French voyageurs

The Solar Queen has landed on this much-shunned and highly radioactive spot as part of a desperate attempt to obtain medical help for the strange illness that has incapacitated the ship’s captain and senior crew.

At this point in the story, the ship is being run by its four most junior members, including Dane Thorson, the novel’s central character, who, as usual with Norton, is somewhat unsure of himself, somewhat klutzy but, it’s clear, with a lot of untapped potential.

The medical mystery began at the start of the novel with a meeting of the Solar Queen’s trading crew with the Salaricki people on the planet Sargol, an intercultural exchange that had all the earmarks of the gatherings of French voyageurs with Native Americans in the 1700s when the barter of goods and the achievement of profit where the goals, no matter what sort of strange ceremonies the two sides had to take part in.

It’s an example of the many ways this novel has the ring of actual human history.

Another instance is the trade wars in space that mimic the trade wars on Earth’s oceans in the days of high-masted exploration, even to the designation of a contaminated boat as a plague ship.

Plague Ship is a satisfying saga of deering-do and quick thinking and cleverness in the face of dark dangers, and a pleasing echo of the story of our own civilization.