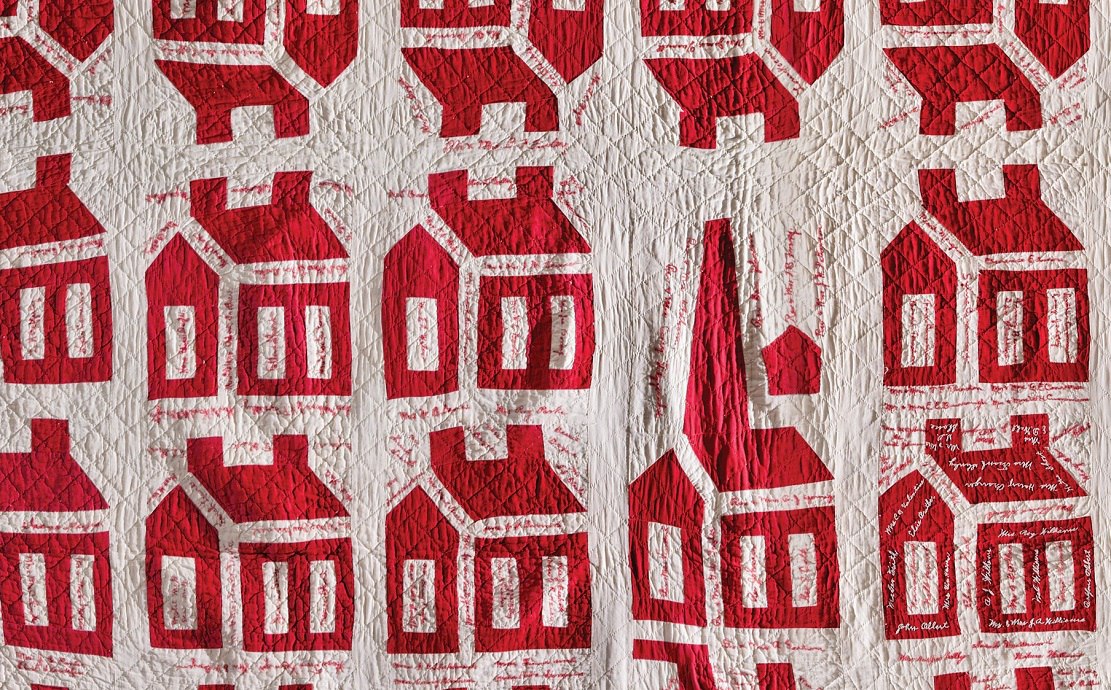 What would it be like to have 653 red and white American quilts assembled and displayed together in the same place?

That unusual question was at the heart of the Infinite Variety exhibit in the Park Avenue Armory in New York City, sponsored in 2011 by the American Folk Art Museum for six days, March 25-30.

The answer: A kind of delight-filled ecstasy.

This show, featuring the treasure trove of a single collector, Joanna S. Rose, was, Schama wrote, “a monster of happiness that will have no competition anywhere this season for sheer sensory riot or ecstatic retinal shock.”

Thousands attended the free show, but only those lucky enough to be in New York for the exhibit’s  short run.

Now comes Red & White Quilts: Infinite Variety by Elizabeth V. Warren with Maggi Gordon (Skira Rizzoli, 352 pages, $60) in which all 653 quilts, exquisitely photographed by Gavin Ashworth, are displayed for close and careful inspection by anyone.

So, what’s the response to seeing all of these quilts assembled in a single book?

The answer: Breathless astonishment at the grandeur of this American domestic art.

These quilts, most of which date from 1880 through 1920, are the creations of hundreds of American women — rich and poor, immigrants and native-born, pioneers and city-dwellers

They represent only a tiny fraction of quilts that were fashioned during those years. Most quilts of that era, of course, were made with many other colors, and most quilts of any color would have been worn out after heavy use in keeping families warm in winter.

Art that was lived in

Nonetheless, these red and white quilts from the Rose collection are a symbol of and a testament to the wondrous domestic creativity — the raw artistry — of women whose main work involved caring for, nurturing and maintaining a family, often with numerous children.

This was an art their families lived in.

It was also a communal art. In creating a work, the quilter would tap into traditions around the nation and throughout the world. She would take up basic patterns and make them her own — patterns with wonderfully evocative and mysterious names, such as Puss in the Corner and Road to Paris, Tree of Paradise and Drunkard’s Path, Hole in the Barn Door and Broken Dishes, Shoofly and Irish Chain.

Often, the creation of a quilt was communal as well. For one thing, women frequently would work together to produce a quilt. For another, some were quilts were created as collective expressions, such as signature quilts.

In the late nineteenth century [write Warren and Gordon], signature quilts were often created by members of a community group, such as a church congregation, for sale or auction to raise funds. Some were intended as a memorial to a person, to commemorate an event, or to mark an occasion.

Others, particularly those dating from the first half of the nineteenth century were made by relatives and friends for an individual or family relocating to another area as a token of remembrance, to bridge the distance.

There is much to love in Red & White Quilts: Infinite Variety — on virtually every page. Even for someone as unfamiliar with needle and thread as I am (although, truth be told, my father, a Chicago cop, was the tailor in our home).

I can only guess the joy — there’s that word again — and avidity with which anyone who sews would find in this book.

It was all a bit overwhelming for me. Yet, I reveled in the art of it, in its creativity, in the sheer exuberance of each and every quilt.

My favorite was a signature quilt using the Houses and Church pattern. My guess is that it was created by a church congregation because there stands the church amid all the houses and around each house there are names sewn in. They have to be the names of congregation members.

Seeing them all together on this quilt says something about the woven lives of members of a religious community.

Indeed, in 2012, when I wrote the 100-year history of my Catholic parish in Chicago, we titled the book Woven Lives.

All of the quilts in this book are about woven lives. Even more than the art, it is these expressions of the woven lives of the creators that give this collection such grandeur and happiness.