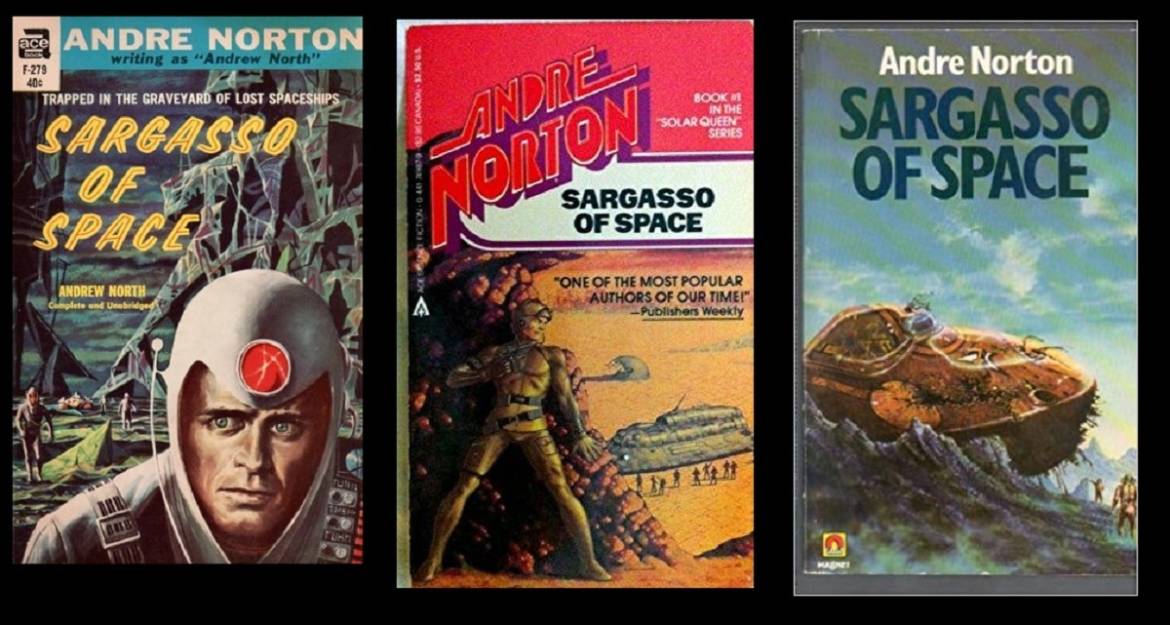 The traders of the Solar Queen have set a trap for some hardened criminals who are hiding on the planet Limbo.  One of the bad guys gets out of his crawler, a Jeep-like vehicle, to investigate something, and, then,….

A stone thudded against the helmet of the would-be investigator, sending him off balance to clutch at the tread of the crawler for support.  Dane slammed another in his direction and then aimed for the driver of the machine.

The bad guys don’t use their deadly blasters but, apparently stunned by this rock-throwing attack, flee out instead into the distance.

Limbo is a world where the remains of a great many space ships have been found, including remnants of the mysterious, little-understood Forerunners race that had populated the cosmos eons ago.  The world is filled with a multitude of machines able to do amazing things.

Yet, I can’t help but smile to see that Andre Norton, writing initially as Alex North, has this key episode in her 1955 Sargasso of Space turn on the ability of her hero Dane Thorson and his fellows to throw rocks — like any Neanderthal of the distant past.

“Those angles are wrong”

Another distinctive aspect of this novel for me are some insights that Norton has about whatever alien civilizations might be found out in space.  While some, like the reptilian Rigellian bad guy, are somewhat human-like, it seems that the Forerunners were quite different.

The brilliant hues of the buildings were subdued by the lack of sunlight, but they still warred with one another and jolted Terran sense in a subtle fashion.  Either the people who had built this city had a different type of vision, or a chemical reaction from the burn-off had altered the color schemes for the worse.  As it was, none of the Traders felt exactly comfortable if they looked too long at those walls.

“It isn’t altogether the color —,” Rip spoke aloud.  “It’s their shape, too.  Those angles are wrong — just enough wrong to be disturbing —.”

Similarly, there is Norton’s realization that, given the nature of the long space voyages in a highly constrained environment, the team chemistry of crews would be exceedingly important.

The novel opens with Dane and some classmates putting their IDs into a computer called The Psycho and waiting for their ship assignments to be spit out.  The job of the Psycho is to match the right personalities in every crew so as to avoid the disasters of the past:

Long voyaging for small crews sealed into star spacers, with little chance for recreation or amusement, had created many horrible personnel problems in the past.  Some tragic cases were now required reading in the “History of Trade” courses at the Pool.

I’ve enjoyed Andre Norton’s novels for more than half a century.  Maybe it’s the 12-year-old boy in me.

She tells a good story, even if her writing at times can be pompous or clunky.

Consider the names she gives her characters.  A bad guy Dane and his friends capture is called Lav Snall.  This is a typical Norton character name — a bit foreign-seeming with odd consonant combinations and word endings, but still pronounceable.

It’s a workable approach, and I’m not sure what a better way would have been.  Still, there are times when I’d like her to have a character named George or Sally.

Dust on the floor

Norton also has settings and scenes that turn up often in her books, such as the abandoned corridor in the Forerunner building.  You know it’s abandoned because there is a thick covering of dust on the floor.

In Sargasso of Space, Norton can be seen expressing a form of prejudice in one place, but countering bias in another.

Late in the novel, Dane’s friends are trying to get information from him in a manner that is definitely not politically correct:

Name-calling such as this is no longer socially acceptable, but, back in 1955 when the novel was published, the U.S. was only a decade removed from World War II during which racial and ethnic epithets were routinely used in talk and in print for the Japanese and German enemies.

On the other hand, in the mid-1950s, when racial segregation was still the policy in most situations in America, Norton has the Solar Queen’s crew of less than a dozen include an Asian (whom she calls an Oriental) and an African-American (whom she calls a Negro).

These two become Dane’s good friends, and, if you didn’t catch the racial identification of the two on page 17, you’d never know that were any different from the rest of the crew.

They were simply crewmates and friends, off on a space adventure.  With the reader riding along.