Previous item “The Loop” on the radio Next item Essay: The After

In the closing pages of Catherine Adel West’s Saving Ruby King, two men and two women can hear police sirens approaching, drawn by reports of a gunshot in the house where they stand.

Usually, in a novel like this — a book about family dysfunction and violent secrets and quests for redemption — this climactic scene holds the promise of rescue for the three people being held at gunpoint by the fourth.

But these people know that, even though the one with the gun has put it down, things could go very wrong.

“The police quickly took control of the scene after they came through the door of Ms. Naomi’s home.  Their guns raised first, we all heard them shout orders and we obeyed, but with the distinct fear all of us have when it comes to police, that no matter the level of compliance, we might still have our caramel-colored bodies riddled with bullets nonetheless.”

Something more than chick lit

Saving Ruby King, set in Chicago, is the latest entry in the popular literary genre that, for the past quarter century, has been labeled, in praise and in disapproval, chick lit.  It’s certainly been profitable for publishers and for those authors whose books rise above the many thousands of titles in this glutted category.

West’s book spans fifty years and covers all the chick-lit bases.  It’s filled with clashes between family members, friendships that provide support but also angst, various forms of abuse, an ongoing bout with alcoholism and relationships soured by unspoken secrets as well as spicier elements: three murders, a suicide attempt and one case of incest.

As the title indicates, Ruby King, a pretty 24-year-old woman who hates her low-level office job, is the center of the novel around whom much of the action revolves, and the friend who is trying to save Ruby from deep despair and an abusive father is her childhood playmate Layla Potter, a successful marketing executive.

Nothing’s simple, though.  The two young women are living with the decisions and actions of their mothers and grandmothers, all of whom have strong parts in this drama, filled with flashbacks.  There are several men in the story, two of whom are featured, but this is unquestionably a novel about women for women.

What’s unusual, what’s unexpected, about Saving Ruby King is that it’s a novel about African-Americans — and it wants to tell its story to a white audience.

“When it comes to police”

Two of the people in that room when the police slam their way in are Ruby and Layla.  The other two are the fathers of the two women. 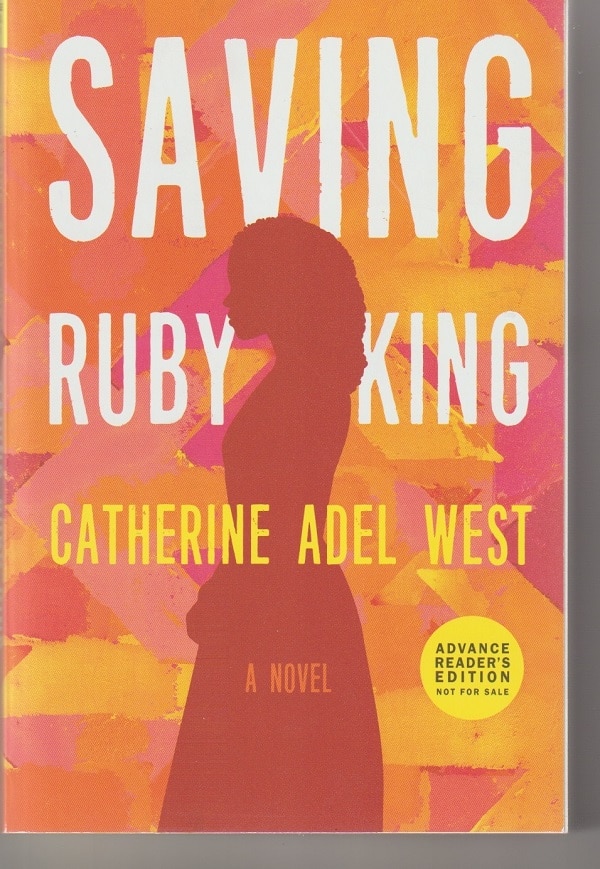 If West, who is African-American, had written her novel for other blacks, there would be no need to explain the uneasiness of the four people in that room — no need to explain that those in the room obeyed the shouted orders “with the distinct fear all of us have when it comes to police, that no matter the level of compliance, we might still have our caramel-colored bodies riddled with bullets nonetheless.”

But that’s exactly the sort of explanation that a white reader would need to know to understand the emotional undertones of that moment.  And it’s one of dozens of similar moments throughout the book in which characters talk about what they’re feeling or thinking or experiencing — descriptions that wouldn’t be necessary for a black reader.

“Nuance of South Side living”

Early on, for instance, Layla’s father Rev. Jackson Blaisdell Potter Sr. is trying to write a sermon but can’t help thinking about the recent murder of one of his congregants:

“Many people believe it was a random act of violence, and our lives, black lives, are like that.  Unforeseen patterns shape our fate.  And on the South Side of Chicago, we exist with a unique kind of knowledge of how fragile life unfolds among these clustered rows of brick, cement and asphalt.”

In another situation, Layla’s white friend from college, Christy Sikorska, comes with her ambitious state senator father to visit her at Rev. Potter’s church.  After Christy leaves, Layla notices five young black men at the corner, “pants hanging low, loud talking about their next reckless conquest, and a friend who was shot,” and is glad they weren’t seen by her friend.

“Most [whites] don’t grasp that nuance of South Side living and all the work of representing this place not as a warzone, but somewhere with nice homes, friendly faces and untapped potential.  Those guys on the corner are the South Side stereotype personified.  What people imagine and fear when they listen to thirty-second news stories.”

“I hold the laughter and sorrow, hope and regret”

All of the main characters are members of the black middle-class although, the novel makes clear, it’s a less secure place for them than it is for whites.  Ruby’s father Lebanon owns a bakery and a home, but money’s tight — as it also is for Layla’s father Jackson, the pastor of Calvary Hope Christian Church and a homeowner as well.

Saving Ruby King has six narrators.  Three are women (Ruby, Layla and Ruby’s mother Alice), and two are men (Lebanon and Jackson).  The sixth is Calvary Hope Christian Church where Jackson is pastor and where all of the characters, going back for half a century, have been worshippers.

By employing the church to describe present-day and flashback scenes, West is signaling the centrality of church for African-Americans — as a gathering place and worship place and place of hope and community.  For instance, in its first narration section, the church explains:

“Within my walls and rooms and arched wood roof, I hold the laughter and sorrow, hope and regret, love and hate of a people who escape into services and music and speaking in tongues and dancing and prayer.  My form was created fierce and strong by rough, scarred hands long since passed from this earth.  The men who built the foundation, placed each of my limestone blocks ever upward, laid the floors and crafted the windows, praising God through their trades and perhaps thought they bartered their way into the pearly gates with their bodily offerings.  Maybe they did.”

The same story could be told of many white churches in Chicago, particularly those founded and built by immigrants.  And many of those churches still play a central role for their parishioners and congregants.  Nonetheless, in this secular age, church has little importance or none at all for many whites.

Not so for African-Americans.  Lebanon is the most broken character in a cast of people dealing with damages they’ve suffered, some recognized, some not.  An ex-con who drinks too much and beats his wife and blackmails his friend, he is hard to like.

Yet, as the church relates, he was, forty years earlier, a small boy who snuck into Calvary to escape the beatings of his mother who, herself, had been abused:

“He hides behind a door in the corner of a basement where the dim bulb’s light cannot reach.  Most children are afraid of the dark and make-believe monsters, but for the boy shadows and darkness are welcome companions.  And the monster in his life is not imaginary.

As an adult, Lebanon is not a believer.  But he is still drawn to church.

West is a first-time novelist, and Saving Ruby King exhibits the occasional awkwardness and bumpiness of a debut.

Still, for fans of chick lit, it’s got everything — cross-generational family hurts and loves, tragedies and enigmas, friends “forever and to the end,” mysteries and shocks, deaths and reconciliations.

Most of all, though, it provides for white readers a sensitive, insider’s look at the black community — not as stereotypes, but as people.  As women and men, feeling deep emotions and facing complex challenges and trying to maneuver through the chaos of existence.

Just like me or you. Just like anyone of any color or ethnicity or sexual orientation or economic status.  People, pure and simple.

This review originally appeared at Third Coast Review on 6.16.20.