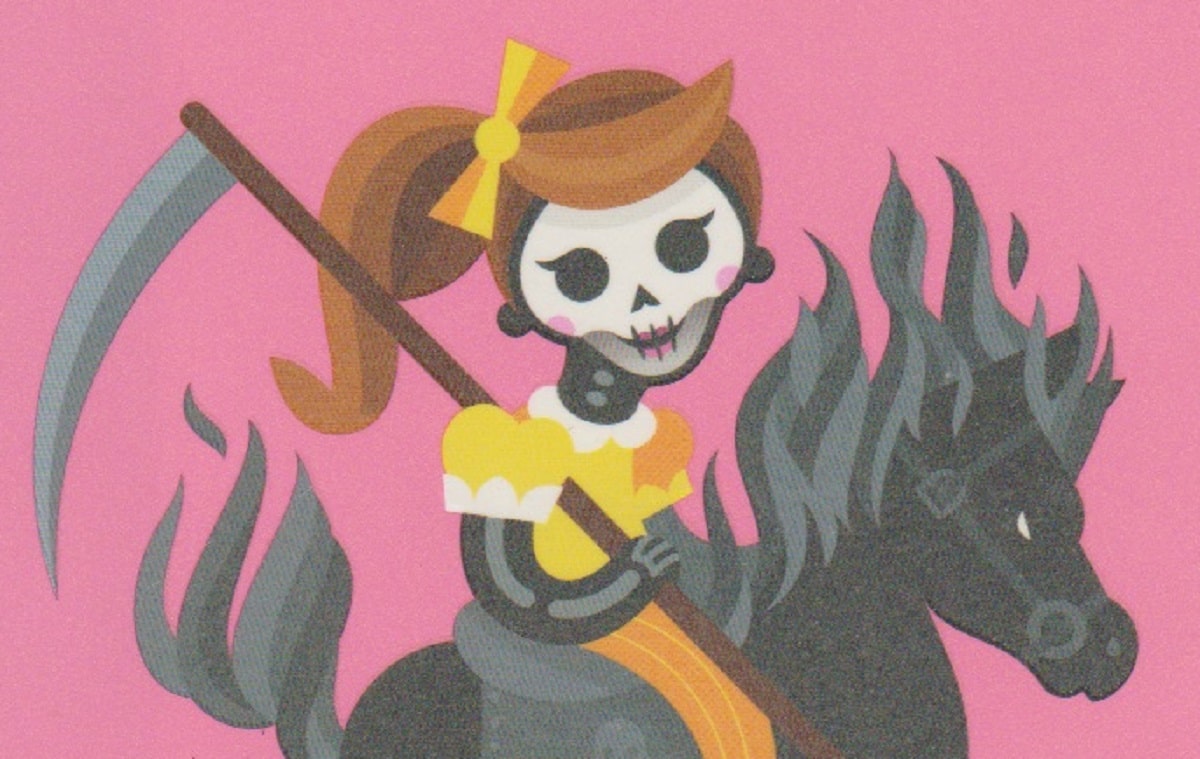 Early on, in Secondhand Souls, the report comes from one character to another that the hellhounds are gone.

This is important to the plot of Christopher Moore’s 2015 comic novel because the hellhounds — often referred to as the “Irish hellhounds” since that seems to sound better — are the protectors of seven-year-old Sophie who is Death with a Capital D, or, as she shouts in a bit of a tantrum, quoting from the Bhagavad Gita:

I am become Death, destroyer of worlds.

Except, maybe, she isn’t Big-D Death any more.

Which is particularly problematic because, again, as when Sophie was a toddler (and had to save the world), the forces of darkness are gathering and appear on the edge of bringing a thundering end to life as we know it. At least, in San Francisco.

So, it’s bad that the Irish hellhounds — Alvin and Mohammed — have disappeared from the scene.

Beyond all that, though, there was at least one reader who spent much of Secondhand Souls mourning the absence of the two 400-pound mastiffs who first made their appearance in Moore’s 2006 book A Dirty Job.

If that strikes you as wacky…well, yeah.

It was hilarious. And Moore must have also thought so since he trotted nearly everyone of that novel’s characters back on stage for Secondhand Souls. He’s done several other sequels like this to others of his books, and it’s worked well.

I’m not so sure in this case.

Let me be clear: Secondhand Souls is filled with laugh-out-loud moments, comments and descriptions. It’s wacky and ridiculous and a lot of fun.

It’s just that I came away feeling that it was good Moore rather than, like most of his books, great Moore. Still, good Moore is nothing to sneeze at.

This may simply be that I wasn’t paying good enough attention to the comedy, or I set up unattainable expectations. But I don’t think that’s true.

All of Moore’s novels are shambling. That is, they kind of wander from page to page. There’s no sense that there is any effort at constructing a tight plot with carefully timed revelations and story twists. Moore has too much fun putting his people into odd situations and watching them cope. He lets them cope and cope and cope, and the results are funny.

With Secondhand Souls, the story seems to shamble even more than usual, and even teeter a bit. Three times in the course of the 335-page book, the story is interrupted so that a series of ghosts — a rich Spanish senorita, a Chicago naval spy and a major-league baseball player — can tell, over the course of five or so pages, “the saddest story ever heard.”

These accounts, presented in a different typeface, bear no relation to the main plot except in the slimmest of ways. These ghosts have “unfinished business,” and, at the end of the book, are able to take steps to finish it.

It also seems to shamble more because the new threat is a lot like the old threat and because it’s the same characters from the earlier book.

In A Dirty Job, much of the humor came when these people showed up, and the reader got to know them and watch them in action.

Well, this time around, the reader knows them so the humor isn’t so surprising. And, aside from a character named Lemon Fresh (yes, that is funny) and a delightfully Irish banshee, the story in Secondhand Souls seems to be more of the same — which is still good, though not great.

And then there are those hellhounds. Or, rather, there aren’t.

I acknowledge that this may simply be a matter of taste, but, for me, the hellhounds, as Moore describes them, can do no wrong. So, throughout Secondhand Souls, I pined for them.

It’s not until about a third of the way through the book that they actually do something.

Lured away from San Francisco, they are outside of Reno having a kayak-topped Subaru for lunch:

Alvin had the last shred of plastic from a red kayak hanging out of his jaws as he squirmed in the still-smoking bits of the engine, while Mohammed was biting at his reflection in the hatchback window, trying to pop the final intact window like a soap bubble, which he did with great growling glee, before crunching down a mouthful for rubber gasket and safety glass.

Something popped and hissed under Alvin’s back and in an instant the four-hundred -pound canine was on his feet barking at the stream of steam, each bark like a rifle report…Mohammed made to join him but was distracted by a stream of green antifreeze which he stopped to lap up off the asphalt.

What makes these dogs so funny for me is that they’re so huge but still act like puppies. It even more fun when they take orders from their mistress — Sophie, who calls them “goggies.”

Which is funny because these are huge animals “so black that they appeared to absorb light — their slick coats neither shone nor rippled with their movement — sometimes they appeared simply to be violent swaths of starless night sky.”

Alas, in Secondhand Souls, Sophie has precious little chance to give them orders.

They get shunted off by that Lemon Fresh guy to some other dimension and only return to the book in the final pages.

Maybe if there is a sequel to Secondhand Souls, the “goggies” will be given a starring role. I would be willing to bet that Moore has as much fun writing about them as I have in reading about them, as exhibited in his final words on them in this novel:

The goggies were quite happy and fairly well-behaved, only occasionally sneaking down to a North Beach sidewalk café where one would eat a comfort dog off the lap of some self-indulgent diner, only to return looking innocent but for the leash hanging out of the corner of his mouth.

To atone, Charlie [Sophie’s dad] encouraged San Francisco’s animal control people to put the hellhounds down, and at Sophie’s instruction, they would go away in the back of a truck, only to return a few hours later, justice done, somewhat stoned on whatever poison they’d been given, to resume spinning bags of kibble into great steaming spools of stool.

You can’t tell me that a writer isn’t enjoying himself to the utmost when he can write the words “spinning bags of kibble into great steaming spools of stool.”

Book review: Two very different books about the history of paper — “The Paper Trail: An Unexpected History of a Revolutionary Invention” by Alexander Monro and “Paper: Paging Through History” by Mark Kurlansky