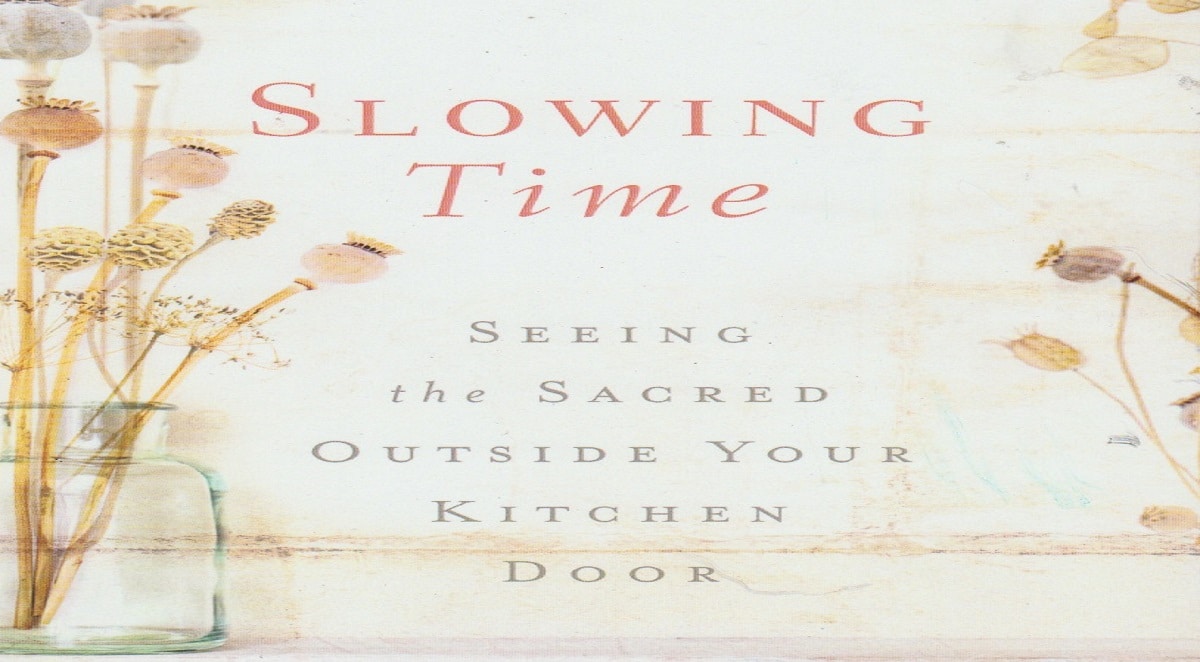 There are many paragraphs in Barbara Mahany’s Slowing Time: Seeing the Sacred Outside Your Kitchen Door, that could be scanned as poetry, such as this one:

Blessed be the golden days and star-stitched nights of autumn.

Blessed be triumphant blast of light, and jewel-toned tapestry,

as the Northern Hemisphere lets out its final hallelujah

before deepening, drawing in.

And bless those among us who are wide-eyed in wonderment.

Barbara Mahany has been a friend of mine for more than 30 years, and, for many of those years, we were colleagues at the Chicago Tribune.

In the excerpt above, there are echoes of Gerard Manly Hopkins and St. Francis of Assisi, but it’s pure Barbara.

She has always been one who is “wide-eyed in wonderment” before the beauty, mystery and complexity of creation, as this 2014 book shows.

Slowing Time is meditative, descriptive, prayerful — and completely out of step with much of what American mainstream society concerns itself. That’s a good thing.

It’s countercultural in the gentlest and steeliest of ways.

Barbara is a believer during an era when belief is either ignored as superstitious claptrap or blamed for violence and unrest in the world.

In one essay, for instance, she riffs on Rev. Martin Luther King Jr.’s “I Have a Dream” speech and explains how, kneeling in a convent chapel, she saw the face of Jesus on the cross above the altar go through

I got the message pure and wholly: Look for — find — the face of God in everyone you meet.

She doesn’t stop there, though. She knows that a dream is only a wisp of nothing if it stays a dream and isn’t put into action. She writes:

Fact is, the only thing to do if we’ve lived a dream is to wake up every morning and tuck it in our pocket, take it where we go. Try, day after soul-grating day, to not give up, to not let down the dream. Not let the phone call go unmade, or the unkind word go uncorrected.

For Barbara, belief is not doctrinaire. She was born, was raised and lives as a Catholic; her husband Blair Kamin, another friend and former Tribune colleague of mine, is Jewish. Their two sons have grown up in a home where both traditions are honored, as Barbara explains:

We weave here. We are braiders. We sift for golden strands, we entwine. We understand that some are shared, and some are wholly different, depending on whose birth threads we are holding.

Across the world and across time, many religious leaders have felt uncomfortable, if not downright antagonistic, toward such openness of heart and mind although the present occupant of Vatican City would probably find Barbara’s spirituality congenial. She writes:

I have never been one to push what I believe. Rather I offer it out, a wisp, a seed, at a time. Gauge the winds, see if it catches.

Barbara’s spirituality is holistic in a way that is rooted in her motherhood.

As an aside, Barbara would make a great priest if the Catholic Church were enlightened enough to ordain her. This book is certainly proof positive that women like her bring a fresh and important perspective to the job of understanding and living faith.

As a mother “wide-eyed in wonderment,” Barbara has found delight, awe and humility in hearing the questions her young sons have asked her about everyday things and the deep mysteries of existence. She writes of the questions:

It is Self, unedited. It is the child’s quintessential work, exploring the unknown. Making sense of everything from how the dandelion blows to what happens when he or she is no longer. Asking giant questions of the universe, and aiming them, first shot out, at the original sounding board of life.

It is a parent’s job, of course, to listen to and try to answer such questions. Yet, Barbara’s example is a reminder that, in listening and answering, the parent is present at a truly sacred moment. Indeed, she writes that such a moment is

the unfolding of a child’s soul, even when the questions are hard to hear, the answers harder to come by.

Slowing Time is so out of step with mainstream American culture that, instead of offering the reader how-to lists of ways to make things happen, it is filled with what she calls blessings, such as the one at the beginning of this review.

They tend to be suggestions that the reader, with eyes wide open, look at the world and take in all its wonder, including its ugliness and pain. For instance, she writes:

If you find a baby bird fallen from the nest to its death, whisper a proper benediction as you perform a proper burial. Lay a sprig of springtime flowers. Teach a child to do the same.

In other words, don’t just walk past and avert your gaze. Don’t just write it off to survival of the fittest. Don’t hurry on to the next stop on your schedule. Don’t be on your phone.

Be present enough to the moment that you are able to see this dead bird and are willing to feel the sadness of its young death and are aware of the gesture of respect that you can give in this moment — not just for the bird but also for yourself and your own short life and for everyone in the world who lives with the knowledge that death is the end of us all.

“In the zydeco jig of creation”

Is it possible to be present like this all the time? Not even the saints could be that holy.

True prayer. A complete letting go. Not an asking for this or for that. But for casting your soul to something beyond, letting it light on a breeze.

It is also to work at recognizing at every turn how we are woven into the world — woven with other people, and also woven into all of the living and breathing creatures, and all of the grass, flowers and weeds, and rocks and water and sun and stars and Universe.

One night, on the way home, Barbara is entranced by a rising moon that is so yellow it looks like a Cheddar Moon, and she drives out of her way toward the lakefront to get a better look at it. But not just to look.

To dance with the moon, to play catch with a raindrop, to give names to the flowers, to whisper to worms, is to let down all those things that keep us apart. It is to whirl in the zydeco jig of creation. To say we belong to the same riotous, marvelous, wonder-filled notion.

Slowing Time is a canticle to the richness, depth, height and width of a life spent “wide-eyed in wonderment.” It’s a life Barbara offers to each of us.

Book review: “In the Aftermath” by Jane Ward