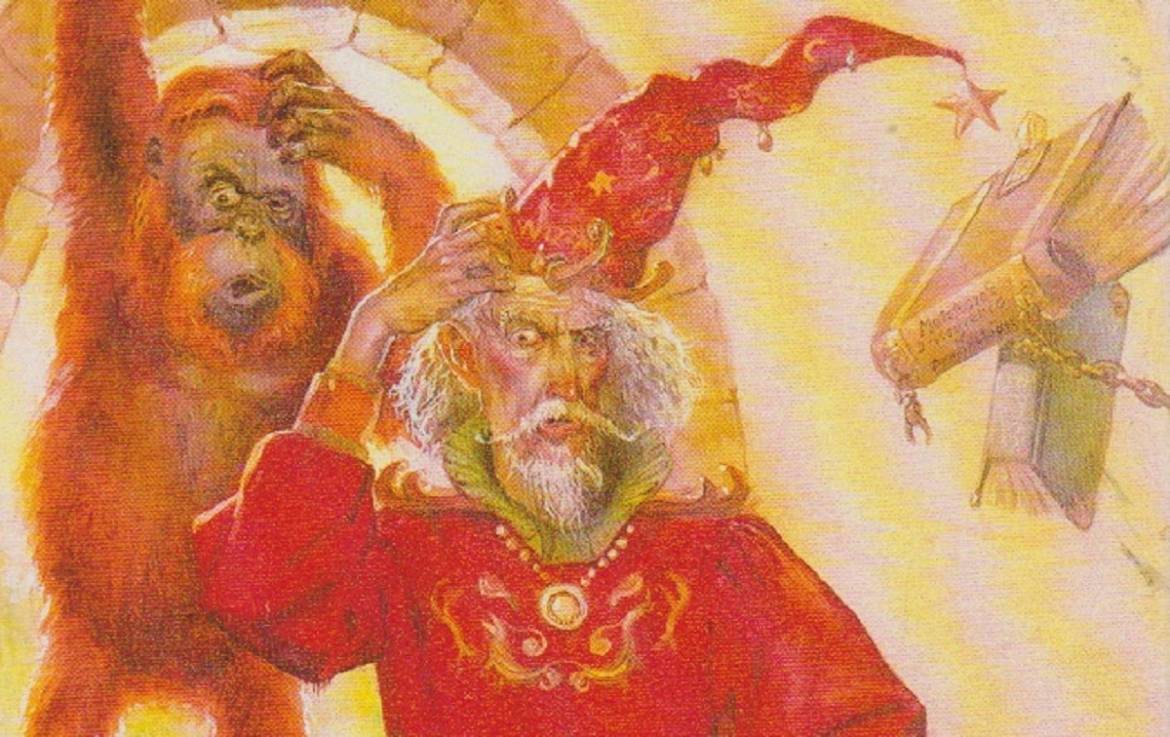 Rincewind — the cowardly and inept wizard whose main skill is his ability to fear so well that he is able to escape from and survive great threats — is the main character in three of Terry Pratchett’s first five Discworld novels, and he makes a cameo in a fourth.

He’s far from my favorite character in the Discworld series, and I’ve seen quotes that indicate Pratchett, at least later in his career, wasn’t all that enamored of him either. He’s a one-note Johnny.

That, it would seem, was helpful to Pratchett at the beginning when Rincewind served as a kind of Everyman with whom readers could relate. He would move through the novel — like a lot of the central characters in novels by Charles Dickens — and meet a bunch of much more interesting people.

Like Conina, the female assassin here in Sourcery, the fifth Discworld novel, the daughter of Cohen the Barbarian, who wants to be a hairdresser but is doomed by hereditary to seek adventure, danger and triumph.

And the Librarian, an orangutan who used to be human and has a lot more on the ball than a lot of humans.

Actually, in Sourcery, there are fewer interesting people than one might wish for.

The most interesting person should be Ipslore the Red, an embittered wizard who got tossed out of the Unseen University for breaking his vow of celibacy and fathering eight sons, the eighth of whom he names Coin.

As Pratchett has made clear in earlier books, a wizard is an eighth son. When a wizard himself sires an eighth son, that son is a sourcerer, spelled that way because he is “a wizard squared. A source of magic.”

A sourcerer is much more powerful than an individual wizard or even a group of wizards. The reason wizards are supposed to be celibate is to avoid the possibility of a sourcerer being born.

In the Mage Wars in the deep past, sourcerers caused all kinds of havoc, death and destruction. And that’s what begins to again take place when Coin shows up with his father’s metal staff.

Or, maybe better put, “his father the metal staff.”

You see, in order to escape Death, Ipslore put himself into the staff from which he controls the ten-year-old Coin and sets in motion the remaking of the Discworld with really bad architecture, the replacement of regular folks as rulers with puffed-up wizards, the jailing of the gods, the opening of the Dungeon Dimensions to the extent that the Things locked there are about to crawl out into our reality, and the return of the Ice Giants (and a very deep freeze).

A lot of havoc.

Of course, since the guy behind it is a metal staff, the dramatic possibilities are somewhat blunted.

To my mind, the problem with Sourcery, in addition to the Ipslore thing, is that a lot of it feels like inside-Discworld (something akin to inside baseball).

What I mean is that there is a whole lot of exposition in the book and a whole lot of action by huge forces, such as the Dungeon Dimensions and the Ice Giants. Relatively little back and forth among characters takes place.

Pratchett has conceived a certain system for Discworld that, in this case, requires a lot of explaining, such as that eighth son of an eighth son business. I’m not sure if he goes so deeply into it because he’s very proud of how it all fits together….or if it’s because he got the thing started in the earlier pages and found as he went along that he had to invent more and more of the system to make things work.

Even so, a muddled Pratchett novel is still well worth the time it requires.

There are, for instance, his puns and quips:

“Votes from your glands”

In Sourcery, the reader has the opportunity to watch as Pratchett dips his metaphorical big toe into the roiling waters of lust and sex.

When Rincewind and Conina have arrived in Al Khali on a quest, a voice in the wizard’s head says, “You rather like her, don’t you? I can tell.”

Rincewind gets a voice in his head every once in a while throughout Sourcery. Usually, it’s his conscience, so he asks if that’s true this time.

“Your libido,” the voice answers. To which, Rincewind responds:

“Look, go away, will you? I’m a wizard! Wizards are ruled by their heads, not by their hearts!”

“And I’m getting votes from your glands, and they’re telling me that as far as your body is concerned your brain is a minority of one…. Your heart has got nothing to do with this, by the way; it’s merely a muscular organ which powers the circulation of the blood. But look at it like this — you quite like her, don’t you?”

Then, they meet the Seriph, the ruler of Klatch, whose name is Creosote and who is immensely rich and keeps a harem of scantily dressed young women who sit on his lap and tell him stories.

He fancies himself a poet, and fancies Conina as one of his harem, so he tells her, in rather colorful ways, that

In response to that last one:

Conina’s eyes widened. “They are?” she said.

“No doubt about it. I know jeweled melons when I see them.”

It’s all more than a bit silly. And Pratchett seems to be having fun….but not that much fun. He doesn’t do much with lust in the rest of the novels.

More poignant are the references in Sourcery to death.

Pratchett, who suffered from early-onset Alzheimer’s disease, died in 2015 at the age of 66.

That was more than a quarter of a century after he published Sourcery in 1989, and more than three decades since the first Discworld novel saw the light of day in 1983.

Yet, from the start, the novels reflect Pratchett’s fascination with death…or Death, if you’re speaking of the black-robe, skeleton guy who appeared as a character in nearly all of the Discworld books.

He’s here too, at the beginning of Sourcery when Ipslore the Red jumps into the metal staff to evade him and at the end when Death finally collects Ipslore. As he warns the wizard on page 6:

YOU’RE ONLY PUTTING OFF THE INEVITABLE.

“That’s what being alive is all about.”

Yep, Ipslore is right. Being alive is putting off the inevitable, a sentiment Pratchett expressed often in his books.

Twice, in Sourcery, characters make the exact same comment about death — “Death is but a sleep.”

First, it is the collective voice of 200 dead wizards, and then it is Conina, quoting her father.

Pratchett was more than a little ambivalent about the whole God thing, but wrote often about how belief can make things happen — for instance, how believing in a god gives that god life, or believing in hope brings hope.

Describing death as a sleep seems a hopeful idea.