Space Prison by Tom Godwin is a crackerjack novel that richly fulfills the modest boast on its cover: “A Science-Fiction Adventure.”

In fact, I wonder if the book would have done better in terms of sale and had more staying power in terms of reprints if it had had a more accurate title. Space Prison is the title of the edition I read, published in 1960 by Pyramid Books.  It was better than the one for the original 1958 publication, The Survivors, but not by much.

The Survivors is too generic; it could be a South Seas saga or a mountain-climbing novel.  As for Space Prison, it brings up images of criminals and an actual prison with cells and guards and all that.  But that’s not what Godwin’s novel is about.

The cover art for Space Prison is also kind of generic although it’s worth noting that it does represent two characters as they appear in the first few pages of the book, a guy with a rifle, John Prentiss, and a woman in a red dress, his daughter Irene Humbolt. But they’re both killed off pretty quickly in Godwin’s novel.

The best image of what the book is about is in the bottom right corner, just above Irene’s shapely red hip — a whole bunch of people being marched out of a spaceship under guards who are both armed and violent.

And the best description of the book — and a much better title — is actually the line above the words Space Prison on the cover:

So, maybe, the cover should have looked something like this (although much more professionally done):

That’s the story that Godwin tells — Some 4,000 people from Earth are landed on this really horrible planet Ragnarok by the bad, vicious and arrogant Gerns who seem pretty much like human beings, just from another planet.

They’re marooned there.  It’s a “HELL-WORLD” with 1.5 gravity which makes everything the Earth people try to do immensely difficult, laborious and tiring.

It’s filled with nasty, deadly animals and hardly anything to eat, and the weather is crushingly hot in the summer (because of two suns) and crushingly cold in the winter — and only gets worse because an Ice Age is approaching.

I mentioned above that the two characters pictured on the cover are quickly killed.  That’s not really a spoiler.  All through the novel, characters are introduced by Godwin, take some action over a few or several pages and then die.

It’s an interesting authorial strategy, and, in many cases, it wouldn’t work.  The problem is that no character has much character.  They all tend to blend together.

This is heightened by the fact that the same handful of surnames appear over and over, starting with the original settlers — Lake, Humbolt, Schroeder, Chiara, Barber. And the same few first names are used over and over — John, Julia, Howard.

But Godwin’s book works — and works well — and that’s because he has written a novel that isn’t about individual characters but about one character:  the group of humans who are fighting to survive on Ragnarok and eventually wreak vengeance on the Gerns. (In that sense, The Survivors wasn’t such a bad title.)

Over the course of two centuries, this group evolves although it nearly dies off before much evolution can take place.

As the numbers shrink, Godwin’s featured characters are dying as well.  They die from sickness and from savage animals and from getting caught out during a snowstorm.

Further fueling this decline is the difficulty and danger that the original settler women face when giving birth in 1.5 gravity.  Most die, as do most of their children.

And there’s bit of luck here and there, such as the end of what turns out to be a cyclical Ice Age, called Big Winter, followed by a Big Spring, Big Summer and Big Fall.

And that’s when, after surviving, the former Earth people put into operation their plan to avenge themselves against the Gerns.

Space Prison (or The Survivors) is a stirring Robinson Crusoe tale that works well as a portrait of a community that struggles as one to overcome immense odds.  I found it a very satisfying book to read.

So much so that I ordered Godwin’s sequel, published in 1964, The Space Barbarians.  But I have to admit that I have some qualms.

At the end of Space Prison, Godwin sets the stage of this sequel when one of the characters predicts that the people for Ragnarok will become space explorers.  That, I’m sure, will lead to a great many challenges.

But I’m not sure how this sequel will compare to Space Prison which benefited by being intensely focused on one very fragile human community trying to keep alive on a very dangerous planet. 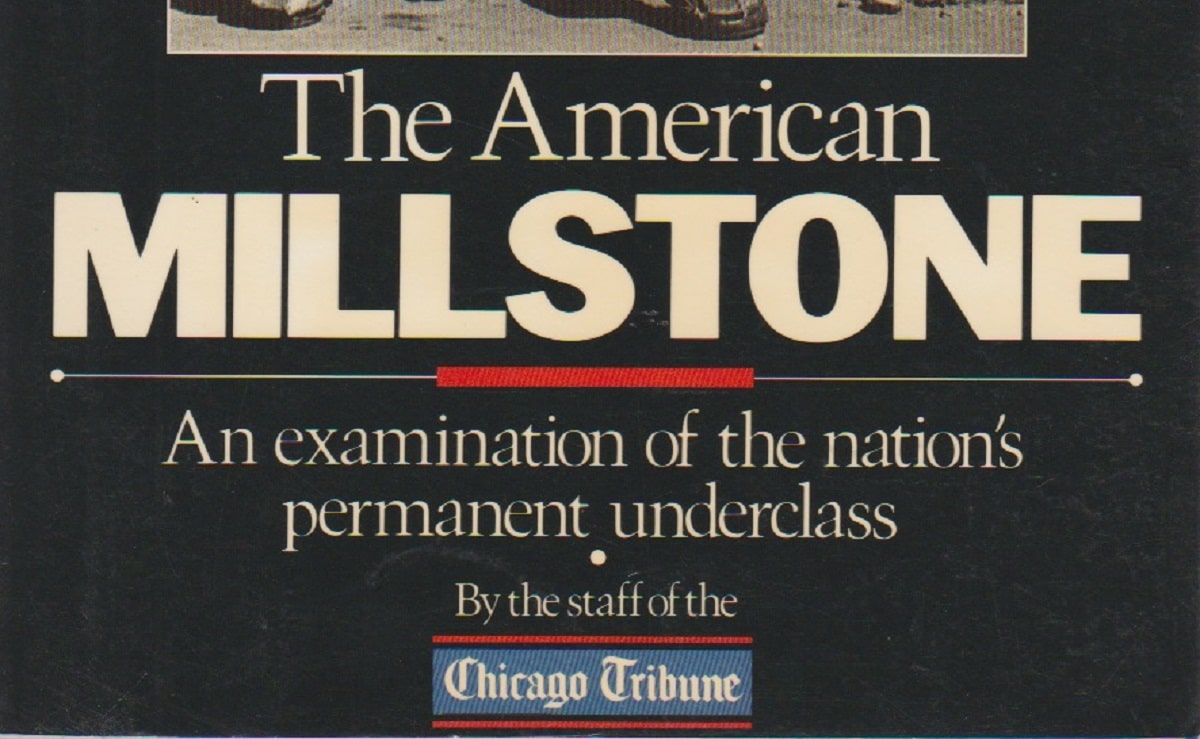 Book review: Poverty books — 1985 — “The American Millstone: An examination of the nation’s permanent underclass” by the staff of the Chicago Tribune