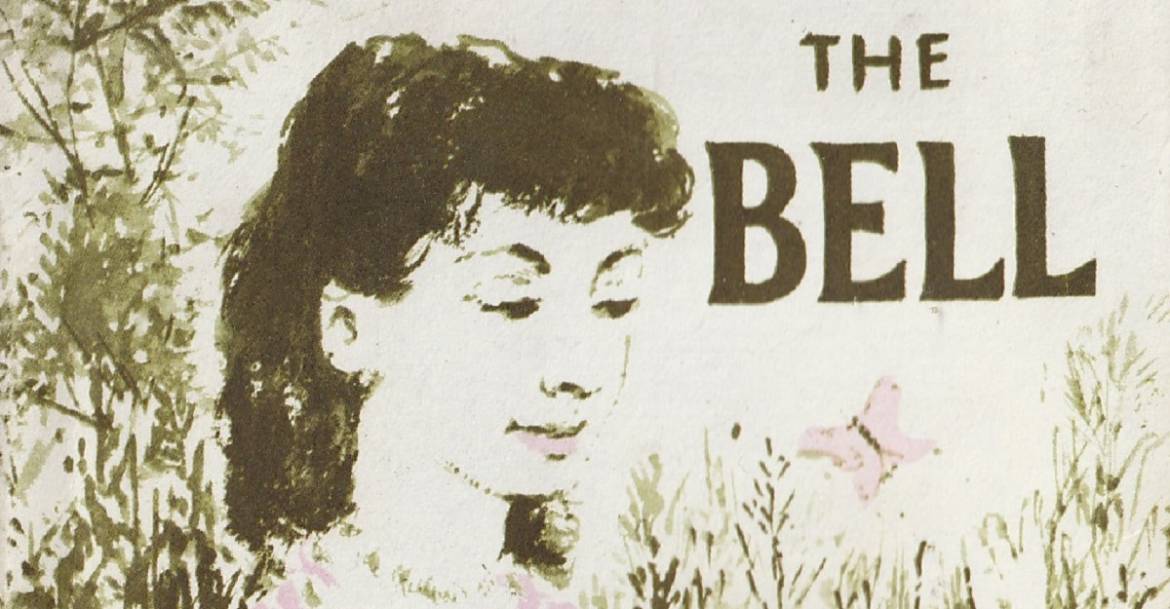 The Bell by Iris Murdoch, published in 1958, is something of a time capsule. It is difficult to imagine a novel like this being written today.

Murdoch’s subject is holiness and sin.

I suspect that no modern novelist would be able to take up such material without an edge of irony or a framework of skepticism. In today’s intellectual universe, belief, particularly religious belief, isn’t taken seriously.

But, in The Bell, Murdoch deals with these phenomena with respect, affection, puzzlement and compassion.

In the actions and interior monologues of her characters, Murdoch examines holiness and sin not as independent, mutually exclusive objects, like an on-off switch, but as the results of myriad, complex and obscure human decisions, often with unintended consequences.

The Bell tells the story of several weeks in the life of Imber Court, a small Anglican lay community living in an old country house in southwest England, next to Imber Abbey, a convent of cloistered Benedictine nuns.

These sisters are awaiting a new bell for their tower which, according to a local legend, has been empty since a 12th-century bell flew out of the tower and into the small lake outside the walls after a nun broke her vows with a lover.

The nuns appear rarely in the novel, and, when they do, they come across as plain-spoken, friendly visitors from another existence, as, of course, they are.  Not angels, not at all. Fully human, even in their apartness. One sister even dives into the lake when she sees two women drowning.

Away from the world

The lay community, headed by Michael Meade, has seven members, five men and two women, one of whom, the young Catherine Frawley, is getting ready to enter the convent and is described with fondness as “our little saint.”  The community members are trying to live a spiritual life away from the distractions and temptations of the world.

Murdoch’s narrative is told from the perspectives of Michael, Toby and Dora.

Michael is a homosexual whose academic career was destroyed by Nick after a mutual flirtation, and he is constantly wrestling with the tenets of his Christian faith against gay feelings and actions and the bliss those feelings and actions bring him when he permits them.  Those urges feel good, give him a good feeling.  But his church’s theology calls them evil.

Toby and Dora are each innocent, though in different ways.  Toby enjoys his blameless, worry-free boyishness until he finds that surface appearances aren’t what they seem.  Dora is forever stumbling around emotionally, verbally battered by Paul, unsure of who she is and what she wants to do, but, after a series of calamities for the community, she finds meaning and purpose in her life.

Nick is at the community because of his sister.  Michael would rather not have him there, and neither would another member, James Tayper Pace, who doesn’t know the history that Michael shares with Nick.

“I’m afraid of his capacity to make mischief.  The more I think of it, Michael, the more I’m sure we made a mistake when we took him in.”

Mischief is one of those great English words that can be light or dark depending on how it is used.  Mischief can be simply playful, frivolous fun, hijinks.  It can also be a behind-the-scenes pulling of strings to bring pain and sorrow.

Both sorts of mischief take place in The Bell, one silly, one mean-spirited.  Both have reverberations throughout the lay community.  Madness, despair, damaged lives and suicide result.

The novel is saying, as I read it, that saintliness isn’t a constant holiness, but a constant striving to do right despite personal flaws, despite the ruination of hopes and comfort.

I think it is also saying that sin isn’t a constant either.  Sin — the movement away from connection with other human beings — is something that is chosen on an occasion-by-occasion basis. Eventually, such choices add up.

Life is a struggle on many levels, and trying to do good complicates that struggle and exacerbates it — and also rewards it.

Sin, the novel seems to say, is opting out of the struggle and opting against doing good.  Opting, instead, from the well of pain of one’s own existence, to commit mischief to cause others pain and suffering, as if that will somehow lessen the mischief-maker’s suffering.

I’m not sure what Murdoch would have thought of such a reading of The Bell.

The novel is richly observed, deeply humane and totally out of step with our present world’s concerns.  Yet, maybe that’s underestimating Murdoch’s accomplishment.

For me, this novel deals with core elements of any life worth living.  In any era.

Meaning and purpose aren’t bestowed.  They are found.  They are the result of hard emotional and intellectual work.

The characters in The Bell, to one extent or another, reap what they sow.  Those closed to connection remain alone.  Those open, yearning, searching, find themselves on a road that is difficult but also rewarding.

Meaning isn’t here or there.  It comes in moving — toward connection or away from it.  Dealing with our bliss and our demons.