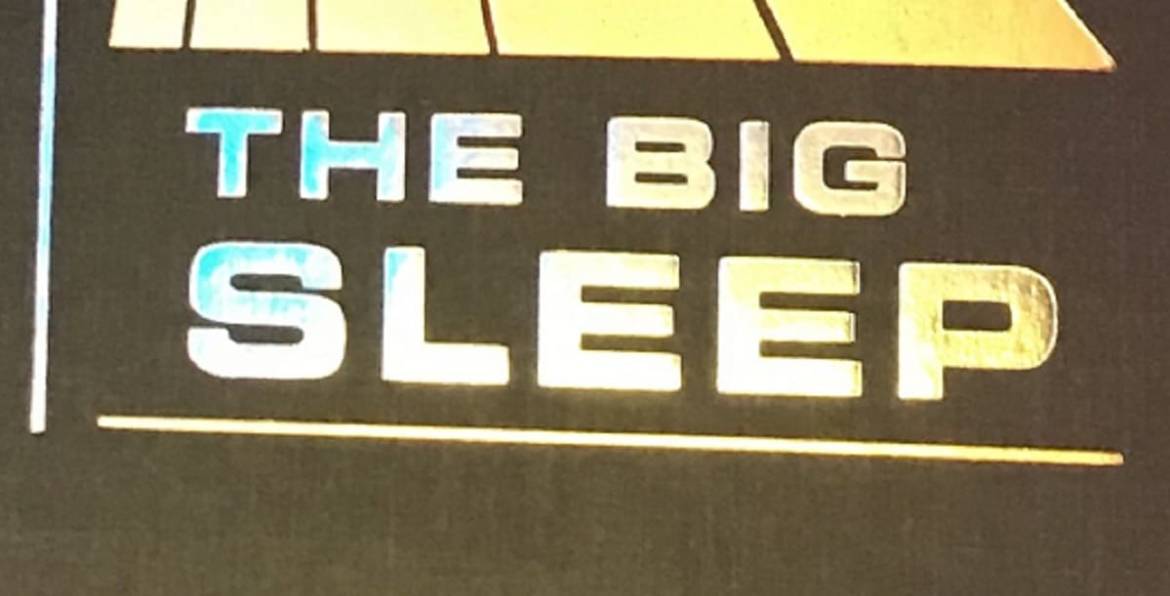 Halfway through Raymond Chandler’s 1939 hard-boiled, highly praised novel The Big Sleep, the rich and wild Vivian Regan turns Philip Marlowe in the front seat of their parked car and says:

“Hold me close, you beast.”

Eighty years ago, that must have had a different resonance.  It must have had an edge of shock for the reader — a married upper-class woman throwing herself sexually at a gumshoe, her father’s hireling.

Today, though, it brings to mind generations of comedies and comedians who have parodied that sort of line to the point that what it raised in me wasn’t shock but a laugh.

In minor ways, The Big Sleep is a victim of its own popularity and acclaim.  It spawned waves and waves of imitators, bad and good.  To read it today is to read it in the context of all those who were influenced so deeply by the book.

It’s also a bit of a victim of its age.  Marlowe, the book’s narrator, is disgusted at the two gay characters in the story, and his denigrating comments make a modern reader squirm.  Because Chandler is presenting Marlowe as a rare decent person in a world of betrayal, selfishness, greed and dissipation, his lack of decency toward the homosexuals is jarring in the extreme.

For those and probably other reasons, I found reading The Big Sleep a fairly bumpy trip at first.

The plot is so convoluted as to be incoherent.  It may have been a not-so-subtle send-up of the mystery puzzles that Agatha Christie and John Dickson Carr were writing at the time in which all the facts fall into place in the final chapter.  Or, more likely, Chandler just didn’t care about the plot, simply using its twists and turns as a setting for something else.

OK, I can understand that.  Elmore Leonard did it with many of his novels which were more interested in snappy dialogue and characterizations than in puzzles.  But then, trying to figure out what Chandler was after, I found myself getting irritated at how at least some of the characters were talking in poetry, like Joe Brody, a penny-ante blackmailer who hasn’t been all that successful. Indeed, he tells Marlowe that he’s broke:

“I been shaking two nickels together for a month, trying to get them to mate.”

Maybe this was underworld slang of that era, but I don’t think so.  And, even if that particular metaphor was actually in use, there was way too much other stuff like it that just doesn’t fit with those who choose crime as a career.

And then everything fell into place.

“Move fast and play for keeps”

The poet at the center of The Big Sleep, I came to realize, is Marlowe.

Chandler has created a decent guy which the soul of a poet and put him into a world filled with corruption, isolation, darkness and evil.  Think of a Greek hero descending into Hell, or Dante.  Or think of Odysseus on his trip through a similarly hellish world in an effort to get home.

Marlowe, it seems, has no home to go to, all the worse for him.  All he has is his decency and, for all his toughness, his sensitivity.

For instance, consider the scene in which a police captain pushes a photo of the missing Rusty Regan, and Marlowe tells the reader:

I looked at an Irish face that was more sad than merry and more reserved than brash. Not the face of a tough guy and not the face of a man who could be pushed around much by anybody. Straight dark brows with strong bone under them. A forehead wide rather than high, a mat of dark clustering hair, a thin short nose, a wide mouth. A chin that had strong lines but was small for the mouth. A face that looked a little taut, the face of a man who would move fast and play for keeps.

Or how Marlowe describes the fog on two occasions, both echoing the moral fog of the world in which he works.  In one, he is sneaking around to a parking lot where Vivian Regan is going to appear:

The scrollwork along the edge of the porch was wet with the fog. The fog dripped from the Monterey cypresses that shadowed off into nothing towards the cliff above the ocean. You could see a scant dozen feet in any direction. I went down the porch steps and drifted off through the trees, following an indistinct path until I could hear the wash of the surf licking at the fog, low down at the bottom of the cliff. There wasn’t a gleam of light anywhere. I could see a dozen trees clearly at one time, another dozen dimly, then nothing at all but the fog.

In another, he is driving with Vivian Regan from a gambling casino:

We drove away from Las Olindas through a series of little dank beach towns with shack-like houses built down on the sand close to the rumble of the surf and larger houses built back on the slopes behind. A yellow window shone here and there, but most of the houses were dark. A smell of kelp came in off the water and lay on the fog. The tires sang on the moist concrete of the boulevard. The world was a wet emptiness.

“Rats behind a wainscoting”

Or consider Vivian’s younger and even wilder sister who sneaks into Marlowe’s apartment and surprises him when he walks in late to the flat and turns on the light:

The bed was down. Something in it giggled. A blond head was pressed into my pillow. Two bare arms curved up and the hands belonging to them were clasped on top of the blond head. Carmen Sternwood lay on her back, in my bed, giggling at me. The tawny wave of her hair was spread out on the pillow as if by a careful and artificial hand. Her slaty eyes peered at me and had the effect, as usual, of peering from behind a barrel. She smiled. Her small sharp teeth glinted….

I reached down and moved a knight [on his chess board], then pulled my hat and coat off and threw them somewhere. All this time the soft giggling went on from the bed, that sound that made me think of rats behind a wainscoting in an old house.

“From home plate to second base”

Marlowe doesn’t especially fancy most of the people around him, but he takes a liking to the short and decent bookmaker Harry Jones:

He slid past me carefully as I held the door, as carefully as though he feared I might plant a kick in his minute buttocks. We sat down and faced each other across the desk. He was a very small man, not more than five feet three and would hardly weigh as much as a butcher’s thumb. He had tight brilliant eyes that wanted to look hard, and looked as hard as oysters on the half shell. He wore a double-breasted dark gray suit that was too wide in the shoulders and had too much lapel. Over this, open, an Irish tweed coat with some badly worn spots. A lot of foulard tie bulged out and was rainspotted above his crossed lapels….

He reached for another of my cigarettes, placed it neatly between his lips and lit it with a match the way I do myself, missing twice on his thumbnail and then using his foot. He puffed evenly and stared at me level-eyed, a funny little hard guy I could have thrown from home plate to second base. A small man in a big man’s world. There was something I liked about him.

Marlowe likes Harry because Harry is a soul like him, moving through the dark sea of life, trying to survive and trying also, in some way, to do the right thing.

Life does not treat Harry well.

The title of Chandler’s book comes from its second to final paragraph.  It is a bleak paragraph in a bleak book:

What did it matter where you lay once you were dead? In a dirty sump or in a marble tower on top of a high hill? You were dead, you were sleeping the big sleep, you were not bothered by things like that. Oil and water were the same as wind and air to you. You just slept the big sleep, not caring about the nastiness of how you died or where you fell. Me, I was part of the nastiness now….But the old man didn’t have to be. He could lie quiet in his canopied bed, with his bloodless hands folded on the sheet, waiting. His heart was a brief, uncertain murmur. His thoughts were as gray as ashes. And in a little while he too….would be sleeping the big sleep.

That, Marlowe says, is what he has to look forward to — and each of us.

As for today, it’s pretty bleak, too, as the next, the last paragraph relates:

On the way downtown I stopped at a bar and had a couple of double Scotches. They didn’t do me any good. All they did was make me think of Silver-Wig, and I never saw her again.

Book review: “The Bible Unearthed: Archaeology’s New Vision of Ancient Israel and the Origin of Its Sacred Texts” by Israel Finkelstein and Neil Asher Silberman