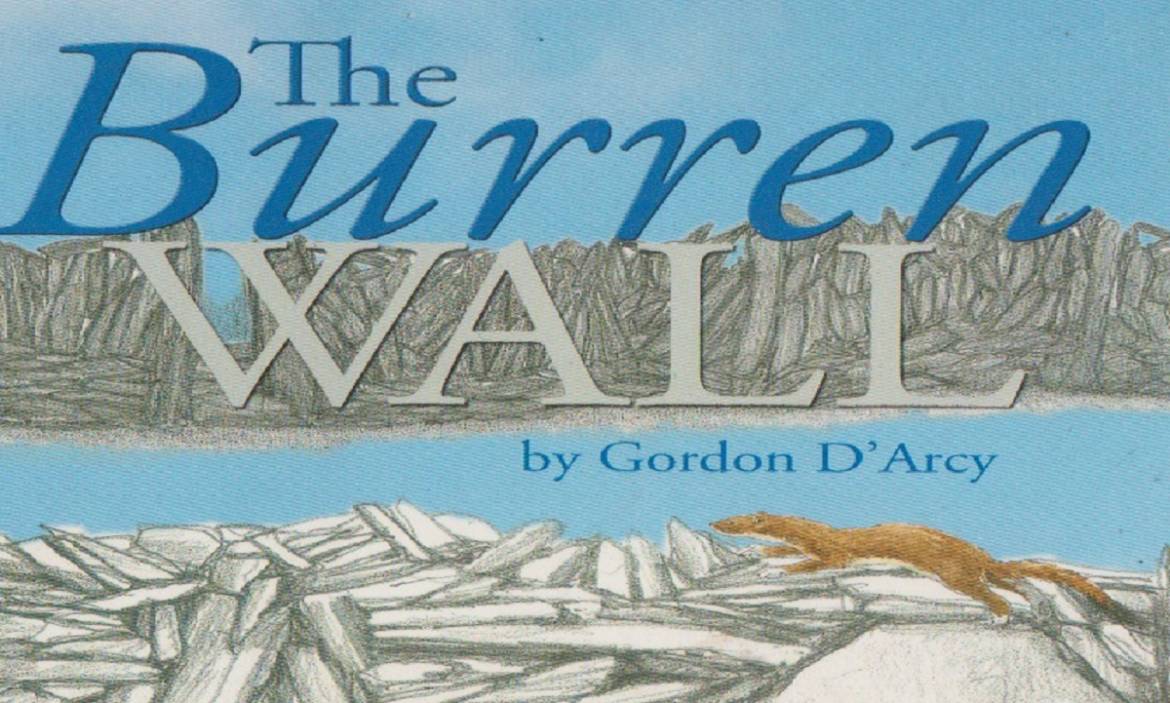 I’ve never been to the Burren in western Ireland or, for that matter, to Ireland at all.  But my curiosity was piqued when I heard about Gordon D’Arcy’s 2006 book The Burren Wall.

It’s about the thousands of miles of stone walls that criss-cross the stark obdurate Burren landscape of grasslands and heath — human-made lines fashioned with unmortared rocks piled atop one another.

When D’Arcy writes of the Burren wall, he’s referring to a general type of wall that’s found in the region, a very simple construction, built from human sweat and muscle, dating from just the other day to more than 5,000 years ago.

As the photographs in his book show, these walls give the land a strikingly distinctive look.  They also provide a home for a rich array of flora and fauna.

Much about these walls is mysterious.  There is, for instance, no knowing who put up what wall.  Nor, aside from classifying a particular wall in a general era of hundreds or thousands of years, knowing when that wall was created.

As D’Arcy notes, you might describe any of these walls as a land boundary, but there’s more to it than that.  He writes:

Archeological investigation…has shown that clearing and enclosing land for livestock and crops has been going on for as long as people have sought to survive in this stony region.  Was the wall originally intended as an enclosure or an exclosure?  Perhaps both?…

Walls are also clearance, stock-piles.  Strewn stones that might otherwise injure beasts or interfere with planting are handily consigned to the boundaries, perhaps for future reuse.

So a wall may have been created to keep sheep in or to keep predators out or simply to clear the field of rocks.

The “why” of a wall may be hidden in the fog of history.  Still, the wall remains, a testament to backs that bent and arms that hefted stone and set them in a line. The walls, writes D’Arcy:

stand as testimony to the labour of innumerable generations, carrying forward both the tried and trusted skills and the innovations of predecessors.

Despite an increasing dependence on machinery, block and mortar, little radical change is found in the finished product.  The same simple methods used in hand-building stone walls in prehistoric times are still used today.

Among the walls that can be found on the Burren are:

D’Arcy includes one chart showing the different ways that the builders incorporated large and small stones in their walls.  Sometimes, stones of the same size would be stacked upon each other.  Other times, longer stones would be inserted vertically as sort of walls enclosing the smaller stones stacked in between.

As the farmer Michael O’Donohue writes in a short essay in the book, the walls “provide shelter for livestock, protect tillage and fodder crops, provide a habitat for various types of wildlife, contribute to biodiversity — and most of all make a very effective farm boundary.”

“A functional work of art”

And something else, as D’arcy points out:

The Burren wall, in its many forms, has rightly been described as a monument to the farmer….

The style of construction has provided us with an aesthetic form, as in country crafts, generally, that has its roots in practicality: the wall as a functional work of art.

Inherent knowledge of how best to build, to withstand storms, has dictated the manner in which stones are chosen, laid and the wall intermittently strengthened.  Maximum endurance using a minimum of material is facilitated by the limestone’s high frictional characteristics.

In other words, a wall in the Burren is pleasing to the eye from a distance and up-close because of its simplicity and functionality.

As D’Arcy writes in a later chapter titled “The Drystone Wall. A Work of Skill, a Work of Art,” these Burren walls evoke admiration and pleasure in the viewer:

In particular, as in all successful craft, the balance between function and form is both evident and pleasing; the stone wall looks ‘right’ in the setting of the Burren.  Were the intricate network of stone on stone to be replaced by post and wire or concrete block, the effect would be so inappropriate as to be unimaginable….

Intimate knowledge of inherent traits — weight, strength, resistance to elements, friction — define the skill of the worker and his craft.  Beauty is an inevitable by-product of such endeavor.

Oddly, a solid wall wouldn’t stand up to the elements as well as the Burren wall which is filled with gaps between the stone.  Maybe, “filled” is the wrong word.  Maybe “pocked” would be better.

Indeed, as D’Arcy notes, “the drystone wall is not so much a case of stone on stone as stone on space: chunks of stone; chips of light.”

For someone standing close to a wall, “the eye seeks out the ‘peekaboo’ holes between the stones. This is an open-plan shadowy world of overhangs and canyons, spiders’ webs and snails.”

From a distance, “the threadlike boundaries stand out in stark relief in winter sunshine, giving the grey mantle of the landscape an embroidered, patchwork appearance.”

The walls provide a variegated environment for a range of plants, insects and birds, such as birds of prey who leave their calling cards in the form of a particular kind of dropping:

Birds of prey perching on walls may deposit pellets on the topmost stones or on the ground nearby.

Pellets, ‘packages’ of undigested organic material — mainly fur, feathers and bones — are highly recognizable as to species.  Long-eared owl (Asio otus) pellets, for instance, are usually about 4 cm long, cylindrical in shape and full of the greyish fur and bones of rodents.  Barn owls (Tyto alba), on the other hand, deposit shiny black pellets.

As D’arcy describes them, the Burren walls, up close and from far away, display in a striking way the interaction of humans and Nature.

And, in doing so, they create a landscape of wonder and delight.