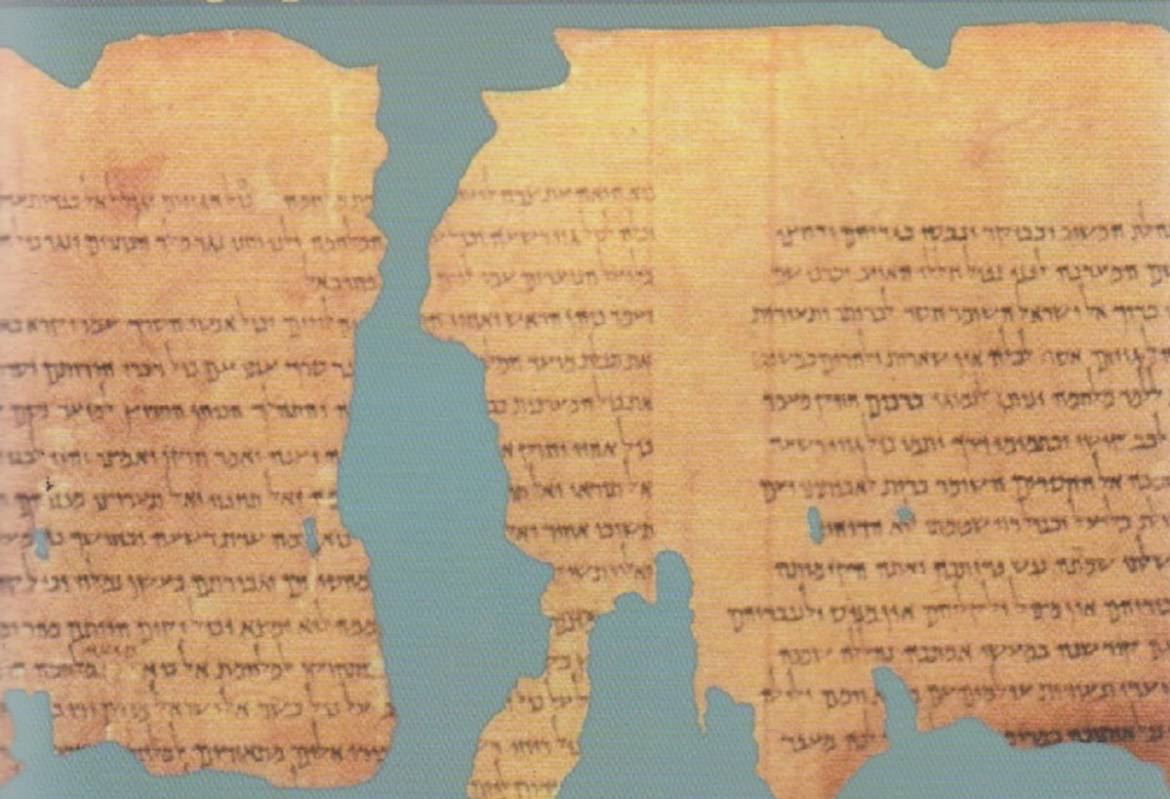 The discovery of 2,000-year-old Biblical and other religious scrolls in a cave near Jericho, just west of the Dead Sea, in 1947, caused a sensation.

The excitement only grew as other caves with other ancient writings were found over the next decade. By 1956, some nine hundred documents — some full manuscripts, many only fragments — had been located. Together, they were called the Dead Sea Scrolls.

The Dead Sea Scrolls may seem to be an unlikely candidate for inclusion in a series on “biographies” of books. The Scrolls are not in fact one book, but a miscellaneous collection of writings…written mostly in Hebrew, with some in Aramaic and a small number in Greek. They date from the last two centuries [BC} and the first century [AD].

So writes John J. Collins, a Yale University expert on the Scrolls, in the preface to The Dead Sea Scrolls: A Biography, one of 15 books published so far in the delightful Princeton University Press series called Lives of Great Religious Books.

Among the spiritual classics that have already been examined in the series are The Tibetan Book of the Dead and The Bhagavad Gita, as well as Mere Christianity by C. S. Lewis and the Book of Job and the Book of Genesis. More than a dozen others are in the works, including the Talmud and Dante’s Divine Comedy and the Autobiography of Saint Teresa of Avila.

Voices from an important hinge period

In the seven decades since the first of the Scrolls was found, they have prompted waves of great controversy, scholarly rancor and wild speculation.

These documents represent an unprecedented glimpse into the past — not just any past, but the moment when Christianity was born and when Judaism was undergoing a major transformation from a faith focused on the Temple to one under the direction of rabbis.

Consider, if you will, what it would be like to listen to an audio of Jesus giving the Sermon on the Mount.

Or to watch a video of the Romans razing the Temple in 70 A.D.

The Scrolls weren’t quite that, but they were the next best thing.

They represented voices from that important hinge period in history, and, until they had been studied closely and soberly, it was anyone’s guess what they might reveal.

Would there be documents that would throw into question — or even completely discredit — the official story of the start of Christianity? Would there be a smoking-gun revelation about — who could tell? — the private life of Jesus? The power struggles within Judaism before and after the Temple was destroyed?

Well, the short answer is: No.

As Collins makes clear in this measured and energetic account, no reputable scholar has discovered anything in the Scrolls that would radically change the way we think today about Christianity and Judaism.

But that wasn’t clear at the beginning, and much of The Dead Sea Scrolls: A Biography is about the battles fought at scholarly conferences and in the news media and between the covers of books (with often sensation-grabbing titles) over the meaning and import of the documents.

All that hubbub is why you’ve probably heard in a vague manner of the Dead Sea Scrolls as this sort of wild card that, at any moment, could drastically alter the entire religious landscape.

Those expectations never materialized. So why should anyone care now?

If not the historical blockbuster that some expected, the Dead Sea Scrolls, nonetheless, have proved to be a documentary treasure trove, providing a rich and nuanced context for the world into which Jesus was born and in which Judaism was transformed during the Roman occupation.

Indeed, they provide a window into that era. As Collins writes:

Of course, the Scrolls are of great historical value. In fields where new data rarely comes to light, the Scrolls have seemed to be manna from heaven. They shed light on the two main religions of the Western world at a crucial time of transition for the one (Judaism) and the time of origin of the other (Christianity).

In the case of Judaism, the Scrolls provide primary evidence for a period where it had been lacking. In the case of Christianity, the light is indirect, by illuminating the context in which Jesus and his earliest followers lived. The light…is of fundamental important for understanding the nature of Judaism and Christianity and their tumultuous relationship over the centuries.

Who hid the Scrolls? And why?

The Scrolls were found in caves near what appears to have been a religiously oriented community called Qumran, a community with an extensive network of pools for ritual purification. The generally accepted belief, writes Collins, is that this was one of the remote homes of the Essenes, one of the three major branches of Judaism at the time, along with the Pharisees and the Sadducees.

Initially, the Scrolls were thought to have been the library of the Qumran community, but, as Collins explains, the more accepted idea now is that they represent the libraries of several Essene communities, collected in the caves during a time of great upheaval.

The contents of this corpus were diverse. Every book of the Hebrew Bible except Esther was represented. (A fragment of Nehemiah only came to light years later, but Ezra and Nehemiah are commonly viewed as one book.) Fragments of previously known non-canonical books, such as 1 Enoch and Jubilees, were discovered. Some texts were clearly sectarian… Several could be described as “parabiblical” — they are related in some way to the canonical books, but are independent compositions…

There are also narrative texts, such as the fragmentary “tales from the Persian court.” A few fragments appear to recall historical events by mentioning names and events. Only a handful of texts appear to contain records or accounts of commercial transactions. There are a few exorcisms and magical texts, and some texts written in cryptic script (later deciphered).

“Only the palm trees”

Until the discovery of the caves, little was known about the Essenes besides what the ancient Greek historian Pliny the Elder had written of them — as “a people unique of its kind…without women and renouncing love entirely, without money, and having for company only the palm trees.”

There were a lot of parallels between the Essenes and early Christianity, but also divergences as well. Collins notes:

The point is rather that both movements drew on the same cultural and religious tradition, and often understood their sacred texts in similar ways, or raised similar questions about them.

If we look at the Gestalt of the two movements, however, the differences are at least as striking as the similarities.

Both the Essenes and the Christians thought the world would end soon in the coming or second coming of a messiah, And both envisioned this as a violent collision between good and evil.

But the kind of conduct that is thought to lead to salvation in the two movements is fundamentally different. In the Scrolls, the emphasis is on attaining and maintaining a state of purity, and this is achieved by separating from “the men of the pit,” which is to say from the rest of society. Jesus, and even more so Paul, in contrast, downplayed the importance of the ritual laws. According to Jesus, it is not what goes into a man that makes him unclean, but what comes out of his mouth.

For the history of Judaism, the Scrolls have been even more important, showing that “there was considerable diversity in Judaism around the turn of the era” — and it was a somewhat fractious pluralism.

Rival sects and parties hated each other with a perfect hatred, on occasion.

Nonetheless, there were also unifying factors — the belief in a single God, shared scriptures, widespread concerns about purity and correct observance, even if these also gave rise to conflict. There was shared ethnic identity too, but it is evident that the true people of God, in the eyes of the sectarians, was not determined by ethnicity alone….It was also necessary for each individual to enter into a new covenant, on the basis of sectarian interpretation.

What’s also clear is that the words of Hebrew Bible “were not definitively fixed in the time of Christ.”

For instance, this “textual fluidity” is shown in the fact that three distinct forms of certain books were found in the caves, representing what is thought to have been three local versions for Babylonia, Egypt and Palestine.

Near the end of The Dead Sea Scrolls: A Biography, Collins notes that, except for the Biblical books and perhaps a couple more texts, the writings found in the caves aren’t great literature.

Nonetheless, they are of immense historical significance because they “fill out our knowledge of Judaism in this period in countless ways. Despite the sectarian ideology of much of the corpus, it also includes much material that is reflective of the common Judaism of the time.” In addition, he adds that “they illuminate the context in which Jesus lived and in which earliest Christianity took shape.”

And there is much still to be learned from the Scrolls.

So, yes, they’re not an audio of Jesus or a video of the destruction of the Temple.

But they are, as a collection, one of the great religious documents of human history.