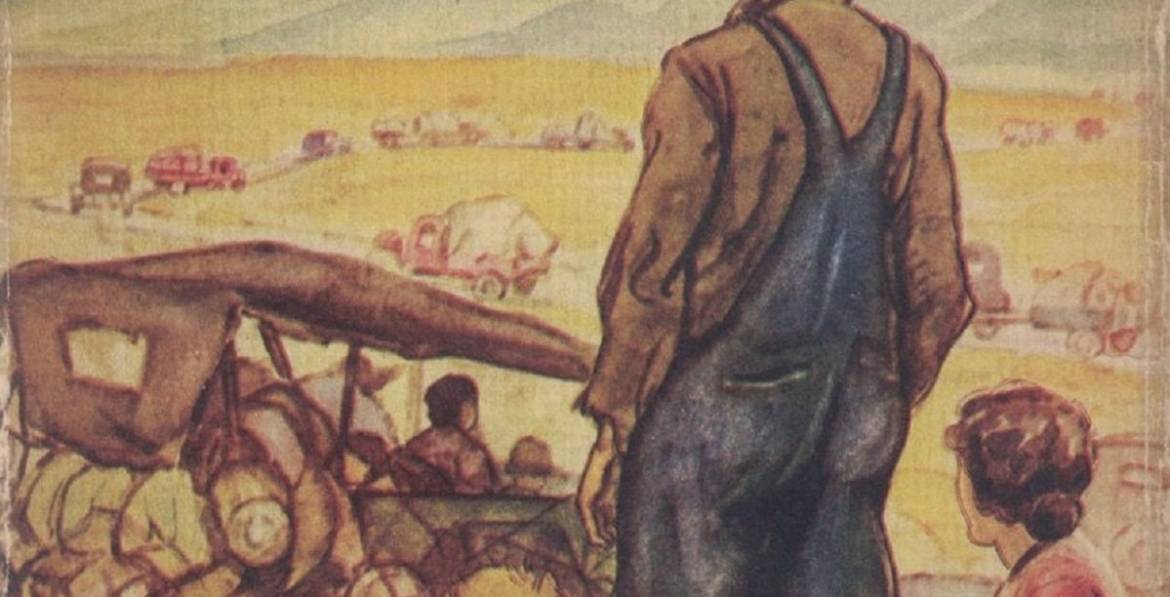 Book review: “The Grapes of Wrath” by John Steinbeck

In 1962, John Steinbeck was the winner of the Nobel Prize for Literature, and the committee that chose him described his novel The Grapes of Wrath as “a great work” and cited it as one of the main reasons for the honor.

A few years later, everyone in an American high school seemed to be reading the book, as I was, and most, like me, were deeply moved by the harsh and tragic lives that the Joad family and other Okies in California were forced to endure.  This gut-grabbing story-telling took our breath away.  The book, published in 1939, was called a Great American Novel.

More than half a century later, I’ve re-read the book and found Steinbeck’s writing, in many places, powerful and even beautiful.  Yet, I’ve come away from the experience disappointed, even chagrined.

More than half a century later, the book seems to be a well-written piece of propaganda.

What I look for in literature is subtlety and nuance, hints rather than hammer-blows, ambiguity, a sense of the mystery of life and human beings.

The Grapes of Wrath is filled with hammer-blows and a clear-cut delineation between the good (the Okies) and the bad (Californians, in general, particularly the rich and the police).

As the Joads are told just before they enter California by a guy who’s going in the other direction:

“People gonna have a look in their eye.  They gonna look at you an’ their face says, ‘I don’t like you, you son-of-a-bitch.’ Gonna be deputy sheriffs, an’ they’ll push you aroun’….You gonna see in people’s face how they hate you.  An’— I’ll tell you somepin.  They hate you ‘cause they’re scairt.  They know a hungry fella gonna get food even if he got to take it.”

This guy goes on, and he gets around to talking about a newspaper magnate who owns millions of acres, even though he doesn’t use them much.

“Got guards ever’place to keep folks out.  Rides aroun’ in a bullet-proof car.  I seen pitchers of him.  Fat, sof’ fella with little mean eyes an’ a mouth like an ass-hole.”

So much for subtlety.

As an idealistic teenager in the 1960s, this stuff seemed clear and honest truth-speaking.  After all, there was something saintly about so many of the characters — from Ma, to Tom, to Jim Casy, the former preacher who becomes a stand-in for Jesus, particularly in the scene in which he gives himself up to the deputies (in Tom’s place) although sinless himself.

In the half century since then, I’ve learned over and over that life is filled with shadings.  You may not like Donald Trump, but, at one point in his life, he was an innocent baby.  You may admire Pope Francis for his focus on treating the poor as full human beings, but he admits, over and over, that he, like any of us, is a sinner.

There’s a term that’s come up in the last decade or two, elevator speech.  It means: Sum up your book-idea-plan-whatever in just enough words that could be said during an elevator ride.  People have asked me to tell them the elevator speech about the book I’ve been writing about Chicago’s elevated Loop. That’s fair enough since mine is a non-fiction book (even though the request rankled me since my story about the Loop is much more complex than can be captured in a few sentences).

To my mind, an elevator speech is out of the question when it comes to a great work of literature.

Can you give me an elevator speech about Moby Dick (“Well, there’s the big whale, and this captain that’s obsessed with killing it…”) or King Lear (“This king divides up his kingdom, sparks wars and goes mad, and then dies”) or David Copperfield (“A boy is born and lots of bad stuff happens to him and a lot of people around him.”)?

In Steinbeck’s The Grapes of Wrath, the elevator speech is easy enough:  The have-nots (the good poor people driven off their land by the Dustbowl) go to California willing to work hard but get crushed by the haves (the bad, unfeeling, greedy rich people and their henchmen).

Yes, the poor in the 1930s and the poor today — and, in fact, the poor throughout history — have been crushed by social, political and government systems that favor the rich.

Yes, there should be more income equality.  The huge wealth gap between the very rich and most of the rest of the nation’s people today is evil.  Greater balance is needed.

As a journalist, I spent a career writing about all that.  And The Grapes of Wrath could almost be called something like journalism, except Steinbeck doesn’t seek the balance in reporting that I and my colleagues strove for.

Indeed, his novel is very much like The Jungle, the 1906 novel about the oppression and exploitation of the poor in the Chicago Stockyards, written by Upton Sinclair, who was a journalist.

Everything is very clear cut, good or evil.

And both novels overtly push socialism as the solution to the woes of the workers.

By contrast, Richard Wright’s Native Son, published in the same year as The Grapes of Wrath, also ends with a call for socialism, but it’s a much better novel.

Bigger Thomas, the central character, is no saint.  He’s angry and violent, a flawed person, but one whose humanity shines through his flaws.  His victimization is much more complex — and more true to the life that we live.

This is why, while re-reading The Grapes of Wrath, I kept finding myself getting angry at Steinbeck for writing propaganda. 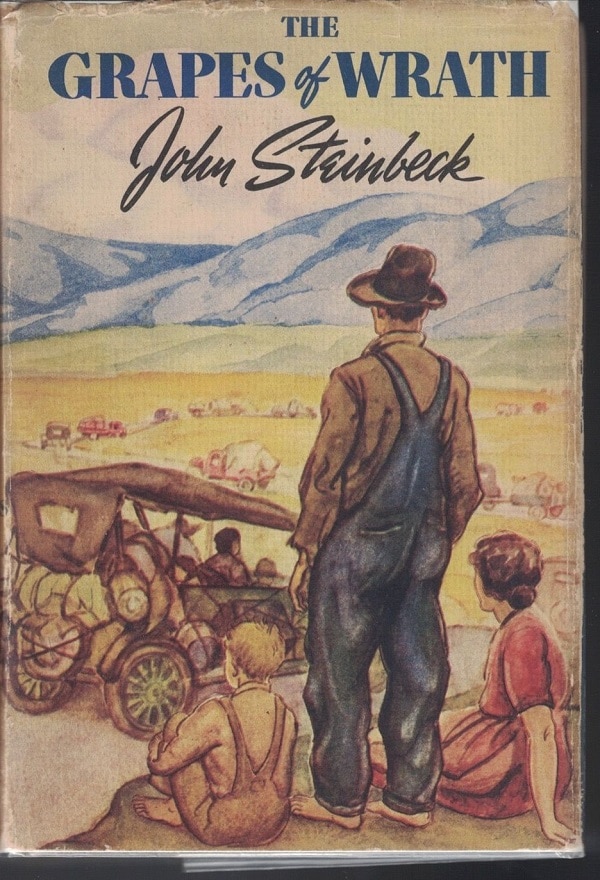 He’s using his high skills as a writer to Make A Point.

That’s fine.  This book, for the first time, brought to the consciousness of Americans the difficult lives that the Okies were living.  It got people talking, debating, thinking.

That’s good.  But it’s not literature.

Steinbeck was seeking to manipulate his readers.  They were (1) to identify with the good and saintly Joads, (2) to feel how horrible and tragic it was to be oppressed by the powerful and greedy, and (3) to do something about it.

“Push us into fightin’ ”

There was one other way he sought to shape the thinking of the average American — through fear of revolution.  And also by stirring up that revolution.

Often in The Grapes of Wrath, Steinbeck makes the point that all of these Okies, if only they’d unite and work together, could bust the confines around them, could grab what was rightfully (under a kind of natural law) theirs and force the powerful to reckon with them. As Tom tells Ma:

“Did you ever see a deputy that didn’ have a fat ass? An’ they waggle their ass an’ flop their gun around’, Ma, if it was the law they was workin’ with, why, we could take it.  But it ain’t the law.  They’re a-workin’ away at our spirits.  They’re a-trying to make us cringe an’ crawl like a whipped bitch. They’re tryin’ to break us.  Why, Jesus Christ, Ma, they comes a time when the on’y way a fella can keep his decency is by takin’ a sock at a cop.  They’re workin’ on our decency.”

A few pages later, Steinbeck, in the voice of the narrator, adds this:

“The great companies did not know that the line between hunger and anger is a thin line.  And money that might have gone to wages went for gas, for guns, for agents and spies, for blacklists, for drilling.  On the highways the people moved like ants and searched for work, for food.  And the anger began to ferment.”

“They’re getting’ purty mean out there.  Burned that camp an’ beat up folks.  I been thinkin’.  All our folks got guns.  I been thinkin’ maybe we ought to git up a turkey shootin’ club an’ have meetin’s ever’ Sunday.”

“I swear to God they gonna push us into fightin’ if they don’t quit a-worryin’ us.”

Maybe I’m looking at this the wrong way.  Maybe I should be thinking of The Grapes of Wrath as a 600-page fable. In a fable, there is good and bad and a moral.

But can a fable be great literature?  A fable is a method of passing along a bit of communal wisdom: Don’t sleep or the turtle will beat you.

A fable is a method a culture uses to describe what, as a group, the culture has decided is good and what is bad.  The hare lost the race, and, in our culture, going back to the Greeks, that’s a bad.

But, in a culture that doesn’t prize competition as much, maybe the hare is doing good by just hanging around and enjoying himself, even to the point of dozing.

In other words, a fable is cultural propaganda.

Whether I think of The Grapes of Wrath as a fable or a novel or reportage, it’s still propaganda.

And, after all my years as a journalist and now my work in writing history, I hate propaganda.

Propaganda is a perversion of the truth.

It looks like the truth, and, in the hands of a master such as Steinbeck, it is very convincing.  But it isn’t the truth.

The truth is that the Okies weren’t all good or saintly, and the Californians weren’t all “ass-holes” or “fat asses.”

The system did oppress the Okies, and people, rich and poor, were part of that system.  Wrongs were done.  No question.