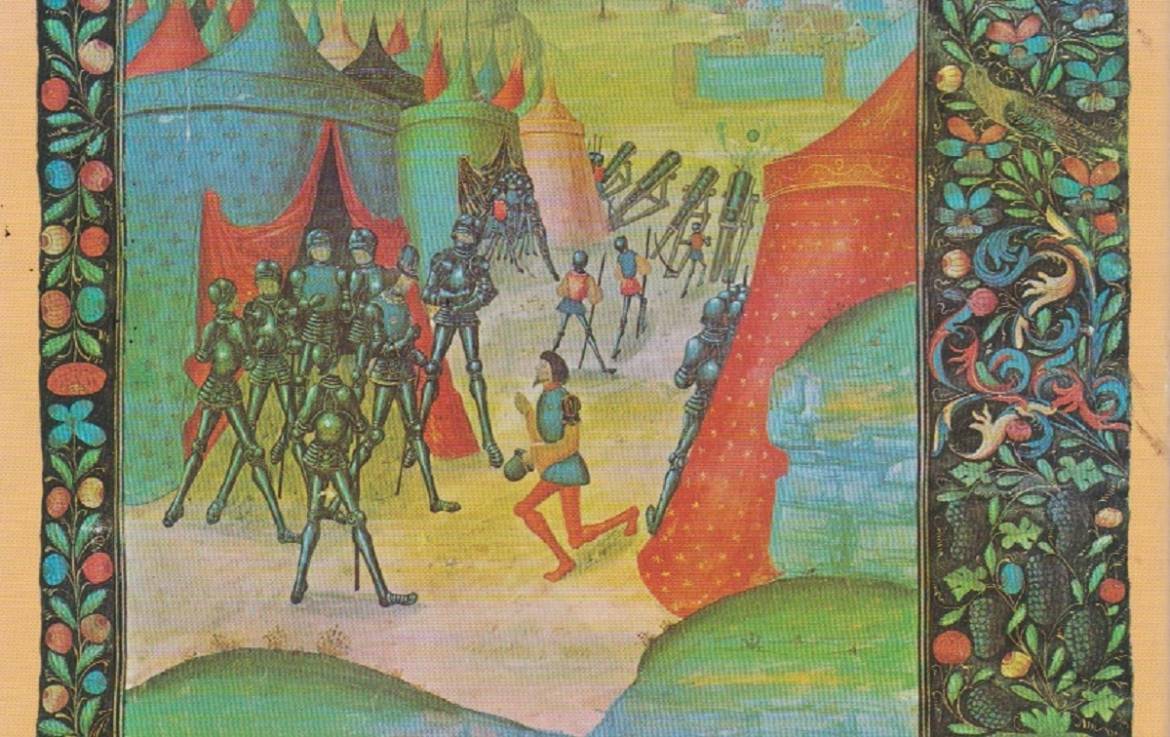 Desmond Seward is adamant in The Hundred Years War: The English in France, 1337-1453: No matter what the French or several generations of modern writers, such as George Bernard Shaw, have to say, he writes:

In 1428 an illiterate shepherdess of seventeen decided she had been called by God to save France and expel the English. In fact, far from driving out the English, Joan of Arc merely checked the English advance by reviving Dauphinist morale, and the [English] Regent managed to halt the counter-offensive.

It was not the Maid who ended English rule in France.

Seward has his own perspective as an English writer, and he does a praiseworthy job of summarizing the Hundred Years War (which lasted 116 years) in 265 brisk pages in this fine 1978 history.

The English of the 15th-century saw Joan as a witch since she seemed to cause things to happen that resulted in unaccountable French victories over the long-dominant English.

The French saw her as a saint.

Yet, even as Seward is trying to set the record straight as he sees it, his telling of Joan’s story over eight pages of his text is not unsympathetic. And, good historian that he is, he sets out an array of facts that one of Joan’s admirers could use to counter Seward’s own arguments.

For me, I think that Seward may be accurate in a very hair-splitting way.

Joan came on the stage of the war for just a couple years and then, an English captive, was burned at the stake as a heretic.   Seward writes:

Joan’s execution made little stir. However, since then the sorceress maid from Doremy has aroused far greater interest than in her own short day. In the 1460s Francois Villon referred to Joan among other of the world’s famous women…and from Voltaire to Shaw to our own day, a surprising range of gifted writers have been fascinated by this Catholic saint.

In France some traditionalist Frenchmen still consider veneration of their petite pucelle to be one of the hallmarks of a true patriot. In a different way she inspires no less devotion in England and America.

Nonetheless she failed in her mission.

In her lifetime, Joan didn’t accomplish her mission to free France of the destructive, demoralizing and devastating English occupation.

Nonetheless, she was the leader of the Dauphin’s armies that won key battles, and she did escort the Dauphin to Reims to be crowned Charles VII.

So, she achieved some of her goals, but not the over-arching one.

This is where it matters whether one looks with a very tight focus at her life or sees things in a broader context.

Unquestionably, Joan — despite her “failure,” i.e., execution as a heretic — radically changed the momentum of the war.

Whereas the English had been in the driver’s seat for some 90 years, suddenly, with Joan’s leadership, the French took charge. Even after her death, the French, still feeding on the inspiration she brought, persevered through the next 22 years to drive the English out of every one of their strongholds on the Continent.

Seward essentially proves this, even if he wants to keep his tight focus on the time Joan was leading armies and then, captured and convicted by a hanging court, dying in the flames for her “sorcery.”

Joan appeared on the war’s stage in 1429 when things were especially dark for the French. Here’s what Seward writes:

In 1428 the Dauphin’s cause seemed lost. The English appeared invincible, their continuing victories proof that God was with them, while it was unthinkable that Burgundians could ever be reconciled with Armagnacs.

The Burgundians, headed by the Duke of Burgundy, and the Armagnacs, the Dauphin’s party, were in the midst of a civil war. That meant the French landscape was wide open for pillage by the goddamns (as the English were called from the phrase the soldiers frequently used).

Not only were the French split, but one of the parties, the Burgundians, was allied with the invaders. Actually, invaders is a misnomer since much of the territory under English sway had been in their hands for decades upon decades.

“It would take a miracle”

So, the French were in a civil war. The English were routinely victorious to the extent that it seemed God was on their side. On top of all that, the ineffectual Dauphin was his party’s greatest handicap, Seward notes, quoting the French scholar Edouard Perroy:

Physically and mentally, Charles was a weakling, a graceless degenerate. He was stunted and puny, with a blank face in which scared, shifty, sleepy eyes, peering out on either side of a big, long nose, failed to animate his harsh, unpleasant features.

If that weren’t enough, the Dauphin was living under the shadow of his mother’s suggestion that, well, promiscuous as she’d been, he probably wasn’t actually the son of Charles VI.

Unfocused as he was, the Dauphin had enough money and soldiers to battle the English, but no gumption. In other words, writes Seward, there was little hope for the French since “it would take a miracle to make” the Dauphin fight.

“The Maid and her sorceries”

The battlefield of Crecy

The French have long asserted that Joan’s appearance was that miracle — actually, that, in one battle after another, she was responsible for a series of miracles, such as her first, the lifting of the siege of Orleans.

The result of that triumph, writes Seward, was that “Dauphinist morale rose wonderfully.”

Seward treats Joan’s rise and fall as a quirk of war, of little impact. Even so, he writes:

It is impossible to know whether Joan’s inspiration was restricted to a small circle of court soldiers or if — as today’s social romantics would like to think — she spoke to the rank and file as one peasant to another.

What is undeniable is that for a few months many Frenchmen thought they were fighting a holy war, and the English went in terror of the Maid and her sorceries.

Seward sees Joan as a temporary spark which left to a few French victories. The rise of the French, he argues, may have begun with those few triumphs, but was due to many other factors over the next quarter century.

Yet, another perspective is that Joan’s victories — so miraculous that the English thought her a witch — were the spark that set the fire of French spirit that carried through to the end of the war.

It’s probably unfair to spend so much of this review on Seward’s treatment of Joan of Arc.

His The Hundred Years War: The English in France, 1337-1453 is a lively, careful and often witty journey through a complex war, featuring the ferocious English warrior King Henry V, the shocking English-won battle of Agincourt and the near hanging by the English of six town leaders of the conquered Calais, later immortalized in Auguste Rodin’s The Burghers of Calais.

Seward has an eye for the pithy quote and aptly colorful anecdote. Aside from what I think is a misreading of the historical importance of Joan of Arc, this is a delightfully sprightly book.