On the surface, Salman Rushdie’s 1988 novel The Satanic Verses is about two highly controversial verses that may or may not have been in Qur’an.

Certainly, that’s what got Rushdie in trouble at the time with Ayatollah Ruhollah Khomeini, the Supreme Leader of Iran.

Accusing Rushdie of blaspheming Islam, the cleric issued a fatwā calling for Muslims to find a way to kill the writer and his publishers or to help others do so. Rushdie went into hiding, and at least one attempt to assassinate him was in process in late 1989 when the would-be assassin’s bomb blew up prematurely.

These “satanic verses,” which seemingly call upon the faithful to honor three pagan female deities, are not accepted in the canonic text.

However, there are many testimonies from the first two centuries of Islam that they were part of the Qur’an and then taken out as being the work of Satan who, it is believed, had tricked Mohammad into thinking, initially, that they were from God.

Rushdie presents the verses as coming from the Prophet after an encounter with the Angel Gibreel in a cave up on a mountain:

“Have you thought upon Lat and Uzza, and Manet, the third, the other?

“They are the exalted birds, and their intercession is desired indeed.”

Rushdie’s novel is a complex interweaving of four stories.

The framing story has to do with two Indian actors:

They meet on a Bombay-to-London plane that’s hijacked and eventually blown up over the English Channel.  Thrown out of the aircraft by the explosion, they fall thousands of feet into the water — miraculously surviving, only to find themselves transformed, in ways that are sometimes very apparent and at others times not at all, but always disconcerting.

Gibreel becomes, in waking life but especially in dreams, the Angel Gibreel who causes things to happen or maybe is forced by humans, such as the Prophet, to cause things to happen. Chamcha becomes a devil, bent on revenge against Gibreel for abandoning him after their miraculous survival.

Rushdie is like a one-man jazz orchestra, knitting into and through this framing story the novel’s other three threads, each of which results from a Gibreel dream:

Is the Iman real?  Or just a figment of Gibreel’s imagination?

Is the pilgrimage actually happening?  Or is it a fever dream?

Is Gibreel to be trusted in what he says about the Prophet and those verses?  Or is he deluded? 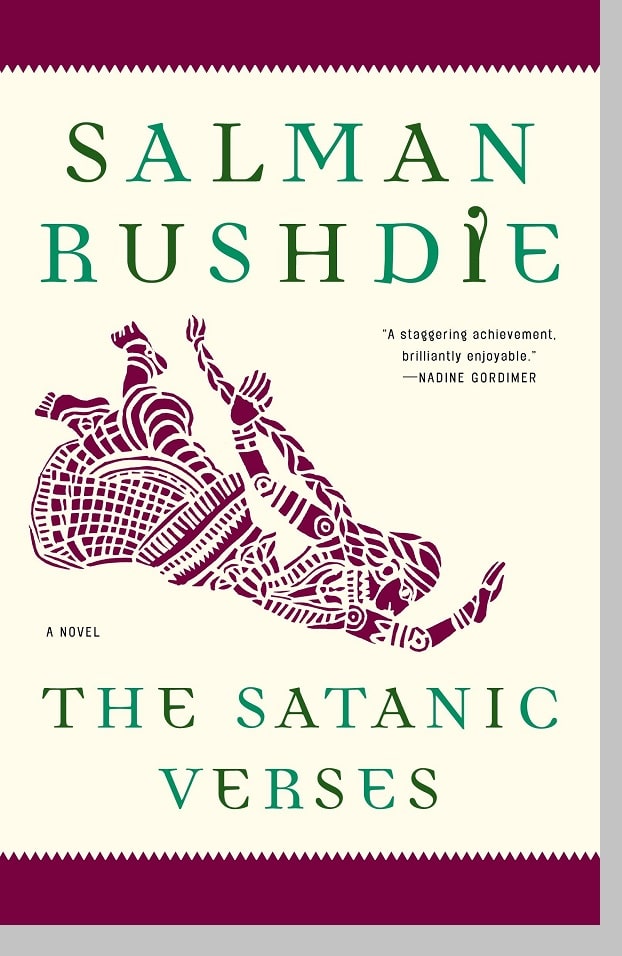 Rushdie in this novel is tackling huge questions dealing with religious faith and doubt, with the extent of human responsibility for good acts and bad acts, with the beauties and horrors of story-telling, with inspiration and delusion, with victimization and oppression, with fanaticism and tolerance, with the power dynamic of women and men, with the hate and love of the oppressed for their oppressors, and with the sheer un-understandableness of life.

All of these subjects, and many more, are threaded together in a kaleidoscopically garish yet vibrantly beautiful fabric of narrative that cartwheels all over the place providing absolutely no solid ground on which a reader can be comfortably entertained.

Instead, Rushdie bombards the reader endlessly with the irreconcilable, the incredible and the astonishing.

Further, he seeds his mammothly complex narrative with further complications through cross-references and half-references and seeming allusions and crosscurrents among his story threads, such as these:

On that last item, the term, of course, is used for those words that might or might not have been part of the Qur’an at one point.

But might one also apply it to the messages that Aeysha — she, clothed in butterflies — receives and treats as the word of God and that come, she explains, in a very odd way: “The archangel sings to me to the tunes of popular hit songs”?

And might it also be applied to the words that the anti-modern, anti-history, anti-secular, anti-tolerance Iman has required to be sung at the end of his holy song: “Death to the tyranny of the Empress Ayesha [his life-and-death opponent], of calendars, of America, of time! We seek the eternity, the timelessness, of God”?

Rushdie himself uses the term “little satanic verses” to refer to the coup de gras of Saladin’s campaign to destroy Gibreel’s relationship with Allie Cone by stoking his overarching jealousy through many rhymes of seemingly childish doggerel, recited in many voices, in multitudes of anonymous phone calls, as if directed to Allie, to wit:

“Roses are red, violets are blue,

“Sugar never tasted as sweet as you.”

And, finally, to Gibreel.:

“Violets are blue, roses are red,

In The Satanic Verses, Salman Rushdie is handling explosive stuff, sort of like a terrorist assassin.

His focus, though, isn’t something specific, but everything specific.  His novel says that real life can’t be trusted and neither can dreams, but the only way we can begin to find out who we are and what we need to do is to study real life and study dreams and try to find a way to exist with these two irreconcilable aspects to life.

At the end of his novel, Rushdie’s angel is destroyed, and so is the woman he loved.

The demon who brought about that destruction, however, finds a rich new life, even, to his own deep surprise, finding peace and reconciliation with his dying father.

Who is good?  Who is bad?  Is anybody good or bad?

“The rules of Creation are pretty clear”

“He saw, sitting on the bed, a man of about the same age as himself, of medium height, fairly heavily built, with salt-and-pepper beard cropped close to the line of the jaw.  What struck him most was that the apparition was balding, seemed to suffer from dandruff and wore glasses.”

God calls himself “The Fellow Upstairs.”  And he sends Gibreel off: “There’s work to be done.”

He doesn’t say what work.

If he was actually there.  If he wasn’t a figment of Gibreel’s imagination.  If he wasn’t, as in the story of the Prophet, Satan in a masquerade.

Much later, God has his say in a very short aside to the reader:

“I’m saying nothing. Don’t ask me to clear things up one way or the other; the time of revelations is long gone. The rules of Creation are pretty clear: you set things up, you make them thus and so, and then you let them roll. Where’s the pleasure if you’re always intervening to give hints, change the rules, fix the fights? Well, I’ve been pretty self-controlled up to this point and I don’t plan to spoil things now. Don’t think I haven’t wanted to butt in; I have, plenty of times. And once, it’s true, I did. I sat on Alleluia Cone’s bed and spoke to the superstar, Gibreel.”

As a last word, that seems to sum up Rushdie’s take on this life as we know it.  Or maybe not.