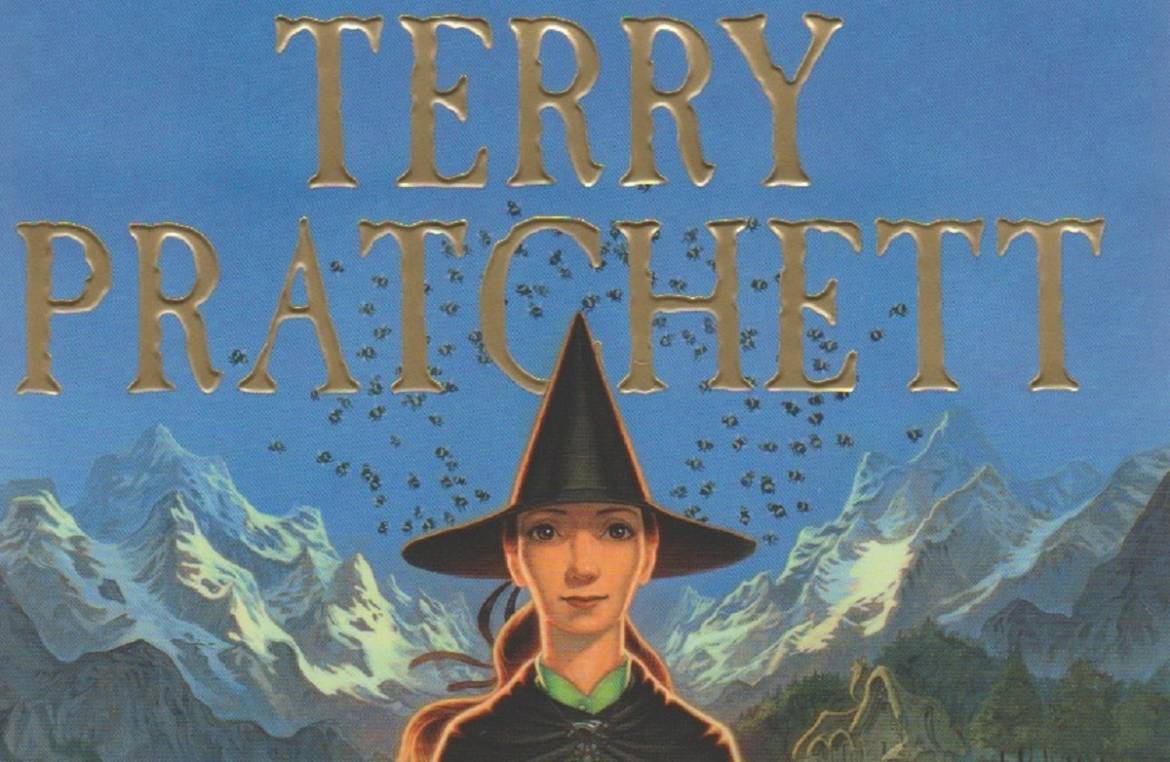 Then, looking into the privy’s shimmering water, she realized she could also see her face.

And she sighed and said, “Drat, and tomorrow was going to be a much better day.”

The next few pages, early as they are in The Shepherd’s Crown, are the core of the novel, the last of Terry Pratchett’s dozens of books about the fantastic flat planet of Discworld where the dwarfs, vampires, humans, goblins, elves, wizards, werewolves, trolls, witches and other odd living being are, well, pretty much like us.

But, before I discuss those few pages, let me get a few things out of the way.

In December, 2007, Pratchett announced that he was suffering from early onset Alzheimer’s disease. In the face of this dread diagnosis, he redoubled his efforts to get the stories bouncing around in his head onto the pages of his books, producing five and, now posthumously, a sixth, The Shepherd’s Crown. He died last March.

In a note at the end of The Shepherd’s Crown, Rob Wilkins, a longtime editorial assistant, notes that Pratchett’s process involved

telling the story to himself as he wrote it, writing the bits he could see clearly and assembling it all into a whole — like a giant jigsaw puzzle — when he was done.

He would continue to tinker with the manuscript, refining and revising here and there up to and even past his deadline until, finally, he had to send it off to his publisher.

With his worsening illness, Pratchett wasn’t able to do as much refining and revising, and Wilkins writes that The Shepherd’s Crown was

not quite as finished as he would have liked when he died. If Terry had lived longer, he would almost certainly have written more of this book.

The bottom line, though, is that The Shepherd’s Crown is pure Pratchett, in no sense a second-class citizen among its brothers and sisters in the Discworld canon.

Like all of Pratchett’s novels, his final book works on several levels.

There is the entertaining story he tells, and there are the many silly aspects of that story, often including the magic of puns. (When you think about it, puns are a kind of linguistic magic, aren’t they?)

For instance, as readers of earlier Discworld books have learned, witches are able to put themselves into the body of an animal and maneuver around the world in that body. This usually works fine, but, in The Shepherd’s Crown, Pratchett points out one drawback. Not only does the witch share the body and the experiences of an animal — say, an owl — but also its meals.

It’s amazing how a night as an owl, snacking on voles, can really leave a nasty taste in your mouth.

And then there are the footnotes, always a high point (ahem) when Pratchett employs them in telling one of this stories.

This book is replete with delightfully silly, witty, punny footnotes about such things as the view of reality of the tiny, warlike people called the Feagles (see footnote 1 below), one character’s ideas about organized religion (2), a hobby of the scar-crisscrossed people called Igors (3), a friend who accompanied Granny Nanny to the realm of the King of the Elves (4), and a medicine given to an ailing elf (5).

“The magic of everyday”

Beyond silliness and entertainment and silly, entertaining footnotes, though, The Shepherd’s Crown works on a deeper level as a commentary on the human condition, dealing with such perpetual human conundrums as image and reality, talent and ambition, the individual and the community, the grit and wonder of life.

From the bed, [Tiffany Aching] could see out of a small window — see clear across the downs, right to the horizon. And she could see the sun rise, and set, and the moon dance through its guises — the magic of everyday that was no less magic for that.

For all their preoccupation with wizards and witches and all the others, that’s always been Pratchett’s true focus — “the magic of everyday.”

So, yes, this is a true, wonderful, delightful, humorful — full — Discworld novel regardless of the small amount of polishing and buffing that Pratchett didn’t have time for.

And, now, let me get back to those early pages of the book and to Granny Weatherwax.

At first, the reader doesn’t know what it means that Granny saw her face in the privy water and that tomorrow won’t be “a much better day.”

All the reader knows is that Granny stays up all night cleaning her cottage and works on into the next day. From top to bottom, she scrubs the cottage, including — yes, again — the privy.

Things start to be clearer when she goes out to her beehives and thanks her bees, telling them:

“Please don’t be upset when someone new comes. I hope you will give her as much honey as you have given me.”

She walks through her herb garden, “acknowledging every root, stem and fruit she passed.” She goes to the stream and bathes, then comes home and brushes out her hair, repining it in the usual bun and puts on her best witch’s dress “and least-mended pair of drawers.”

Then, she lays on her bed, and, in time, a voice speaks out of the darkness:

ESMERELDA WEATHERWAX, YOU KNOW WHO COMES, AND MAY I SAY IT’S A PRIVILEGE TO DEAL WITH YOU.

ESMERELDA WEATHERWAX, WE HAVE MET SO MANY TIMES BEFORE, HAVEN’T WE?

“Too many to count, Mr. Reaper. Well, you’ve finally got me, you old bugger. I’ve had my season, no doubt about it, and I was never one for pushing myself forward, or complaining…”

YOU ARE TAKING THIS VERY WELL, ESME WEATHERWAX.

“It’s an inconvenience, true enough, and I don’t like it at all, but I know that you do it for everyone…”

Life is precious and rich, a delight to experience, the greatest kind of magic. Pratchett’s books are all about the silliness, hope and faith that carry us through life.

And then it ends.

And it is “an inconvenience.” And we don’t have to like it.

But it is a recognition that, for him — for me, for you, for each of us — Mr. Death comes.

“I know,” Pratchett writes, “that you do it for everyone.”

We each have “our season.” He certainly had his.

Footnotes:
1) The Feagles believed to a man that they had to be dead, as the world they now lived in was grand, filled as it was with so many opportunities for stealin’ and fightin’ and boozin’. A land fit for dead heroes.
2) He knew, too, that gods could sometimes make inconvenient requests. He had an associate who had chosen to follow the crocodile god Offler and then fund he had to keep an aviary of tooth-cleaning birds handy to fulfill his god’s dental whims.
3) Uberwald servants [i.e., Igors, crisscrossed with scars], usually working as doctors, or assistants to mad scientists, who believe a stich in time saves a lot of bother later. They like to swap body parts from an early age, often within the same family, such that an Igor saying “He’s got his uncles nose” really means something.
4) Nanny’s friend on that occasion had been Count Casanunda the lowwayman — a highwayman who carried a stepladder on his horse, on account of his being a dwarf, and was most gallant toward the ladies he encountered.
5) It looked a rather poisonous green before it was heated up, but in most cases the end certainly justified the greens.