Book review: “The Virgin Queen: Elizabeth I, Genius of the Golden Age” by Christopher Hibbert 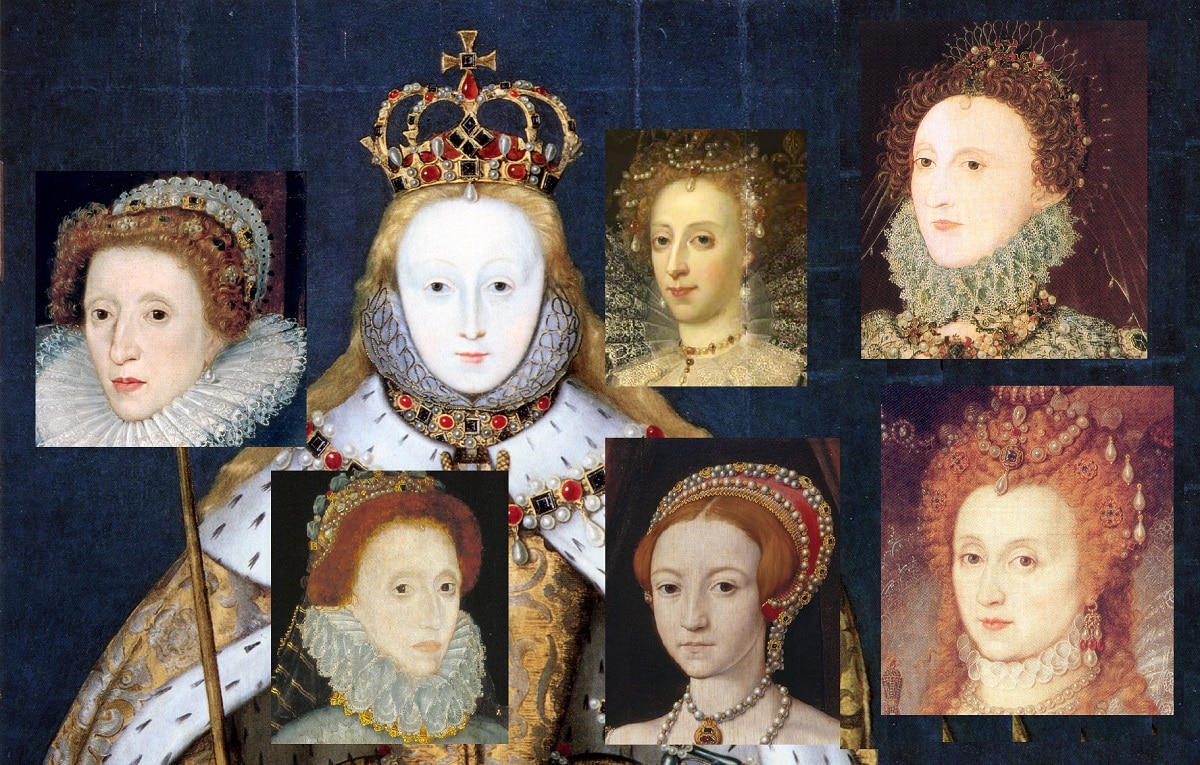 Elizabeth I, especially early in her 44-year reign, had a lot of nagging health problems, but, notes Christopher Hibbert, she hated to be ill or to be thought to be ill.

One time, she had an extremely painful toothache. Her doctors and members of her Privy Council — the equivalent of an American President’s Cabinet — told her the tooth had to be extracted, but she refused.  She kept saying, “no,” until

“the Bishop of London allowed the surgeon to pull out one of his teeth to demonstrate the ease with which the operation could be performed.”

Elizabeth I dominated England as its queen for the entire second half of the 16th century, a time that came to be called the Elizabethan Age. She was intelligent, strong-willed, devious, vain, affectionate and enigmatic, holding her throne for more than four decades during an era when women weren’t supposed to wield such power.

She was also a human being, and that’s the Elizabeth who is the subject of Christopher Hibbert’s luminous 1991 biography The Virgin Queen: Elizabeth I, Genius of the Golden Age. (By the way, for another look at this book, see my review in the Chicago Tribune in 1991.)

She was a vital presence, writes Hibbert, one of the most popular and accessible historians of British and European history.  For all her aches and pains, she “needed little sleep; she spent hours standing up; she continued to walk with energy and to ride with astonishing vigor.” Even so, she wasn’t the easiest person to spend time with, especially for anyone who was her inferior — which, after her coronation, was everyone, except her fellow monarchs. Hibbert points out:

“The Queen was what nowadays would be called exceptionally highly strung.”

She had good reason to be.

She was, after all, a woman — a single woman — trying to steer the English ship of state and also avoid being assassinated, deposed, exiled or executed by any one of a host of foreign and internal enemies, some of whom were relatives.

Speaking of relatives, as the Protestant daughter of Henry VIII and his ill-starred wife Anne Boleyn, Elizabeth was not quite three-years-old when she lost her mother, branded an adulteress and a traitor, to the executioner’s axe, on the orders of her father.

For the next two decades, she was never sure she wouldn’t meet the same fate.

She was an was extremely inconvenient fact of life during the reigns of her Protestant half-brother Edward VI, and her Catholic half-sister Mary I.  As Henry’s daughter, she was a royal figure around whom opposition could coalesce. And, more than once, those advising her stepsiblings thought it would be simpler, cleaner and safer simply to erase her from the succession equation by the separating her head from her shoulders.

Elizabeth knew this, and, when she was taken to the Tower of London during Mary’s reign, she feared she’d never get out alive.

Then, this little girl who lost her mother to the axe and this girl and young woman who spent the next two decades trying to stay alive in a world she couldn’t control, suddenly, at the age of 25, found herself very much in control as Queen — although still braked in many ways by her Council and Parliament.

Well, of course, she was highly strung.

Like Abraham Lincoln in the United States, Elizabeth in the United Kingdom has been the source of endless biographies, histories and analyses.  Each age, it seems, needs to see itself in her mirror.

Part of this is the key role she played in a key moment in her nation’s history, as with Lincoln.  Similarly, like Lincoln, her personality is so complex, so convoluted, so secretive, so mysterious that scholars, novelists and fans — yes, more than four centuries after her death, she still continues to draw fans — can’t help but try to solve the enigma of her personality.

One large group of these works have to do with Elizabeth’s singleness and grapple with such questions as:

Just listing the questions gives a hint of the knotty puzzles that have been like catnip for hosts of writers.

Other Elizabethan studies have to do with the religious divisions of her era.  Edward executed Catholics.  Mary executed Protestants — a lot of them.  Elizabeth, especially in her first decades on the throne, worked to be a unifier of the country rather than a divider.

Catholics did undergo the horrors of being drawn and quartered during her reign, but usually for crimes such as treason and rebellion beyond their religious faith.  (Of course, that faith, which included a papal blessing on anyone who assassinated Elizabeth, was at the root of that treason and rebellion.)

Writers have sought to parse out how much her relative toleration of diversity was for political or philosophical reasons and how much it might have been rooted in her own religious beliefs.

Many recent works have looked at Elizabeth’s reign through the prism of her femaleness.  She used her unmarried state as a political bargaining chip, but her lack of a consort — in a world in which a woman was expected to be married to and rely upon and obey a man — drove her Councilors and the foreign rulers and governments that had to deal with her batty.

There was also the very real problem that, without being married in that age, she could not bear an heir.  No heir meant likely chaos on the succession questions.  Of course, to designate an heir was, potentially, a death sentence for Elizabeth since it would embolden the allies of that future heir to bring about the succession faster than nature might.

One who might have been an heir — and wanted to be — was the star-crossed Mary Queen of Scots whose own life showed how chaotic and catastrophic it could be for a woman to try to rule.  She was thrown out of her own country and, held in England, where she assisted in the planning of a rebellion and was executed.

The interaction of the lives of Elizabeth and Mary Queen of Scots, who never met, and the contrast in their maneuvering in a world of men has been another constant theme of biographers.

In The Virgin Queen, Hibbert eschews all of these themes.  Better put, he deals with all of these questions within the context of telling who Elizabeth was as a person.

“Once she was fully dressed she set about her morning occupations with an energy that suggested she was anxious to make up for the time she had lost.  She spent some time at prayer, then dealt with such business matters as required her attention, reading letters, approving answers or dictating or writing them herself, receiving reports of the Privy Council’s deliberations, talking to foreign ambassadors, suddenly getting up to stride about the room as she elaborated some argument, swearing vehemently from time to time, laughing loudly, behaving in fact in a far more earthy and strident way than would have seemed possible in the pale princess whose demureness the Bishop of London [he of the tooth pull] had once found so appealing.”

With a U.S. President of recent decades, it’s possible for historians to examine appointment books, audio-tapes and other records to know what the leader was doing in the course of an average day.

But such documents aren’t available to Hibbert whose engagingly lively prose belies the work it took for him to gather together enough small glimpses from sixteenth century sources to create this mosaic of her morning and of her life.

Her walking, riding, hunting and hawking

Elizabeth I liked to read, “taking pleasure in solving the problems of translating Latin or Greek into English, finding such work calmed her nerves when she was agitated or alarmed,” writes Hibbert.  And he goes on:

“She also calmed herself with exercise.  The Spanish ambassador once saw her flounce furiously out of her Audience Chamber and into the garden where she paced up and down plucking at her gloves.  When she returned, so he said, she had control of herself once more. Usually she took her walks alone, but sometimes she would take one or more of her ladies with her, or some courtiers or visitors to the court…..

“A skilled horsewoman, she went riding often and never lost her pleasure in hunting and hawking; and on days when it was warm enough, she ‘took great delight’ in eating a meal al fresco.”

Even so, even as the daughter of that gourmand Henry, Elizabeth didn’t find much relish in dining.  Hibbert writes:

“Yet, however hungry her companions may have been after a day’s hunting, the Queen herself was rarely seen to eat with much appetite.”

Usually, she dined with her ladies in her private apartments where she “ate little of the meats her father had so relished, preferring chicken and game.  It was no great hardship to her to observe fast days; and on Wednesday, as well as Fridays, she nearly always had fish.”

These excerpts, just by themselves, give you the beginnings of a sense of who Elizabeth I was and how she lived from day-to-day.  The tooth extraction story is also instructive.

Consider this:  All of the above quotes from the description of her morning up to this paragraph are from a single page (104) in The Virgin Queen.

This is how rich Hibbert’s book is.  Every page has threads like these that he has woven together to display the fabric of Elizabeth’s character and personality in the context of her era, its ways of living and its ways of thinking.

No one is ever going to explain fully the enigma of Elizabeth.  Nevertheless, Hibbert has gone far in this grandly personal biography at giving us the texture and taste and aroma of this compellingly puzzling human being.