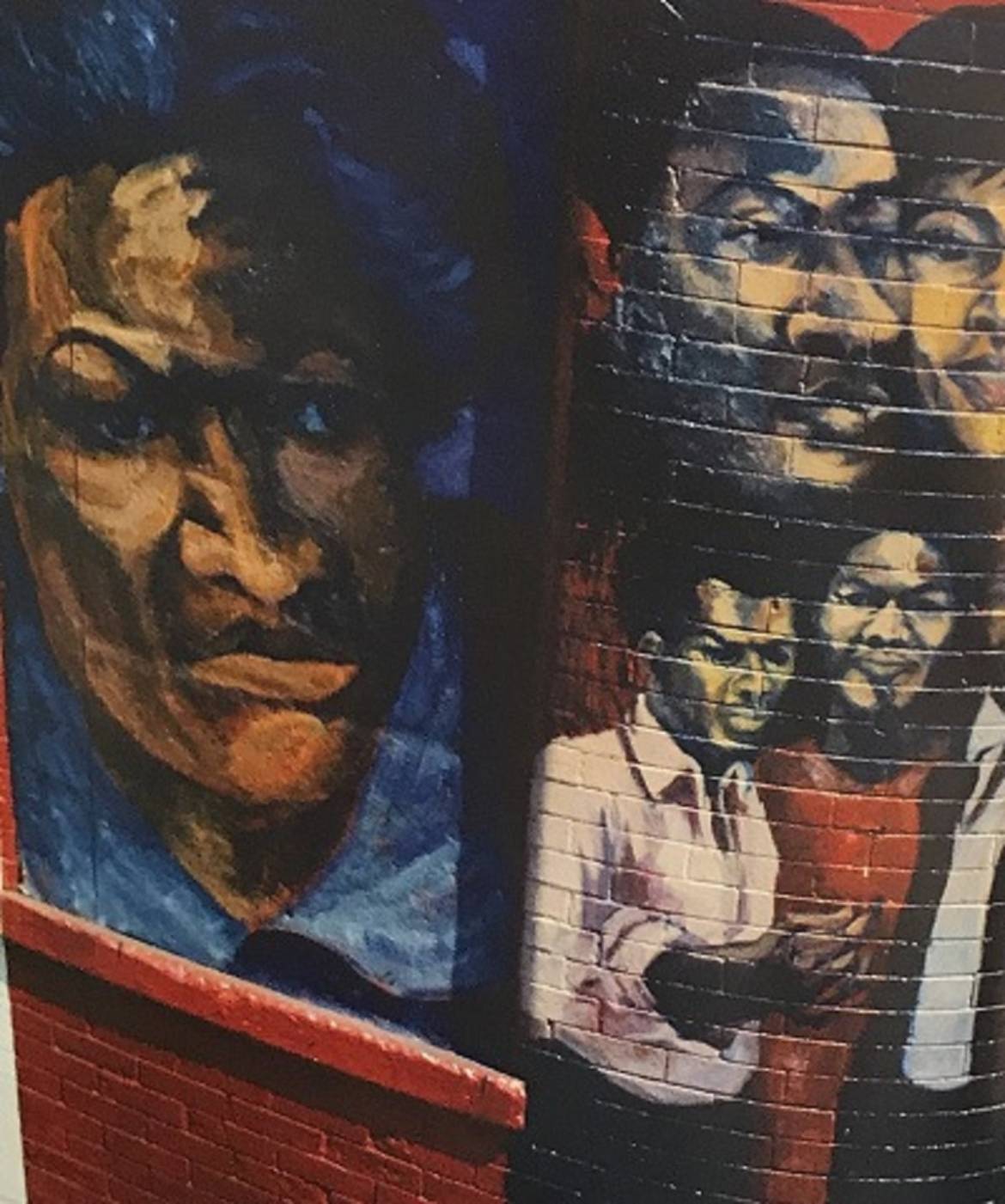 Fifty years ago, William Walker, a veteran muralist, proposed to a group of other black artists and photographers that they collaborate to produce a mural on the side of a two-story tavern in the impoverished South Side neighborhood of Grand Crossing.

After three weeks of labor at the building on the southeast corner of 43rd Street and Langley Avenue, the 20-foot-by-60-foot work of art, featuring dozens of African-American heroes, was completed on August 24, 1967. It was called the Wall of Respect, and it was dedicated several times over the next weeks.

Sometime later, Walker came to the wall and saw a young man sitting on the sidewalk with his back resting on the art work. “How are you doing, brother?” Walker asked.

“I’m getting my strength,” the man said.

This story is told twice in The Wall of Respect: Public Art and Black Liberation in 1960s Chicago, edited by Abdul Alkalimat, Romi Crawford, and Rebecca Zorach, and it provides an insight into what the outdoor mural, created with direct community input, meant to African-Americans in the neighborhood, in Chicago and across the nation.

The work of art, the first of its kind, sparked a community mural movement that resulted in the creation of hundreds of wall paintings in the U.S. within five years and has mushroomed over the decades to include neighborhoods of all sorts in cities large and small.

Newly published, The Wall of Respect, beautifully designed and abundantly illustrated, is a book long overdue for an often overlooked milestone in American art and culture.

It provides a wealth of photographs in color and black and white of the artists and photographers as they created the mural as well as of the community residents who watched and commented on the work in progress. And it offers facsimiles of contemporary documents that chronicle the planning and decisions of the artists, such as a highly edited list of black heroes and heroines to be featured in the mural. (Rev. Martin Luther King Jr., for instance, is nowhere on the list because he was thought to be inadequately militant.)

Essays by the three editors as well as reprints of important and revealing articles, interviews and poetry from the past half century, put the Wall of Respect into its historical context.

Above all, The Wall of Respect book makes available to a wide readership a treasure trove of color images, never before gathered together and so richly reproduced, showing the mural in all its revolutionary glory.

Or, better put, the murals.

The Wall of Respect existed only four years — until 1971 when the building, damaged by a fire, was razed. During that time, it evolved as new images were added in place of earlier ones, often, but not always, without controversy.

For instance, Walker, who died in 2011, thought the mural should be akin to a newspaper with changing themes to reflect the changing times. He painted his “Religion” section three times to emphasize different topics (and, in one case, to remove the image of Nation of Islam leader Elijah Muhamad at the Messenger’s request).

The original version of the Wall, which lasted less than a month, is displayed in the photography of Robert Sengstacke, the noted Chicago Defender photojournalist who died earlier this year. Particularly striking are details of his photo which, laid out on a full page or over a two-page spread, show the seven mural sections with sharp and vibrant clarity. Photos of later versions of the mural and its various sections are also included.

“A great declaration of Black unity”

Although the mural movement has been adopted by communities of all sorts, its opening stages, particularly the Wall of Respect, were directly focused on African-American neighborhoods.

The Wall of Respect, writes Alkalimat, was “a great declaration of Black unity.”  It was an assertion of black identity at a key moment in the nation’s history when the activism of the civil rights movement was expanding into the expression of Black Power. Indeed, the title of the mural was a direct reference to Aretha Franklin song, then on the radio, “R-E-S-P-E-C-T.”

The term “African-American” would not come into wide use for another two decades, but, as Alkalimat notes, there was a rebellion among many in the black community to the term “Negro.” The preferred term among the activists became “Black,” capitalized to assert equality with other ethnic groups, such as the Irish and Italians.

Rejecting the view of many whites, black activists were asserting their equality and power and beauty — in their blackness and black culture. As Alkalimat writes:

“What was once bad became good. It was almost biblical; the last became the first.”

In his poem “The Wall,” Haki Madhubuti (known then as Don L. Lee) wrote of

about our business, blackness

if you can’t you ain’t black

In a 1991 essay, another of the mural project leaders, Jeff Donaldson, who died in 2004, noted that “blacks were rarely seen on billboards, in print or other public media before 1967.”

The Wall of Respect and the mural movement it spurred, Donaldson wrote,

“brought art to the people, and, at the same time, permitted people to participate in the process,…uplifting the spirits of the people by recognizing their heritage, honoring their chosen heroes and focusing their righteous anger on real issues and the choices available to them.”

Like the man “getting his strength” by leaning on the Wall of Respect, Donaldson said, neighborhood people who came to the art would “feel better.”

Gwendolyn Brooks, who died in 2000, captured this emotion in her poem “The Wall” about the mural’s dedication:

However, even as the mural was unifying the community, it became the source of ill feelings among the artists when the “Statesmen” section, painted by Norman Parish, was whitewashed with Walker’s permission and repainted by Eugene “Eda” Wade.

The details remain murky. Parish felt betrayed, and Walker often said he was wrong to give permission to community members to cover over Parish’s work. Art historian Zorach, who examines the question from many perspectives, writes, “It seems plausible that community residents…believed the portrait of Malcolm X was not a sufficiently commanding image of the fallen leader.” In Wade’s version, a large black fist replaced Malcolm X.

She also writes that, although the mural as a collage gave artists freedom to employ their individual styles,

“Norman Parish was an excellent painter, but his section did not have the visual presence of some of the others.”

This book will serve

Most of the artists went off to other pursuits, often in academia, shortly after the Wall of Respect was completed. Walker, however, remained, keeping an eye on things and adding new elements as he saw fit. Over the next four decades, he created outdoor community murals in neighborhoods across Chicago, many of which have been destroyed.

As for the Wall of Respect, the spot where it was located was left vacant for 30 years. In 2001, a block-long, two-story building with affordable housing apartments was erected there.

In a Chicago filled with signs, plaques and other tokens of remembrance of people and events of the past, none at that spot recalls the Wall of Respect. This lovingly produced and documented book will serve.

This review originally appeared in the Chicago Tribune on 10.7.17.