Unknown Man No. 89, published in 1977, is certainly an Elmore Leonard novel. It has all the elements.

It’s built around Jack Ryan, a basically good guy, like all of Leonard’s heroes, who gets into something way beyond his control, as when he learns from his employer some details about Bobby Leary, the guy he’s supposed to track down.

“It isn’t that it’s more difficult so much as I’m getting mixed up with people who shoot each other,” Ryan said, “and it’s a little different than what I’m used to.”

And there’s a guy with a wackily odd name, in this case, Tunafish.  And there’s another who thinks he’s cool but isn’t:

Jay Walt fascinated [Ryan]; it was like the guy was playing a part, the little hotshot in his tinted glasses and leisure suit.  Everything was a big deal, but the guy never paid an invoice sooner than ninety days.

And it features, by my count, four sociopaths who are able to kill with ease and efficiency or order such killings.  Such as the death of Tunafish:

Raymond placed his drink on the table.  He reached into his coat, brought out his German Luger and shot Tunafish in the face twice.

And it has a bad guy, one of those sociopaths, with a particular flair, Virgil Royal:

That’s what [Ryan] had seen, the hat sitting on a bar.  A colored guy with a cowboy hat.  Not a cowboy hat, but like one.  The guy sitting there had been wearing a maroon outfit, maybe like a leisure suit.  He thought of Jay Walt. No, the maroon outfit looked good on the black guy.  Light-colored shirt with the collar out.  And a tight strand of beads showing.

“I don’t want to be inside me”

But there are other ways that make Unknown Man No. 89 very much in a category of its own.

Primarily, it’s the novel’s interest in the 12-step program of Alcoholics Anonymous.  Two of the characters are AA members in good standing.  And then they fall off the wagon, individually.   And then, together, they find that they can drink reasonably — at least for the duration of the novel.

Here’s how one of the characters comes across in her first appearance in the novel:

She was drunk — two o’clock in the afternoon — but didn’t show it, sitting on the bar stool with her denim legs crossed.  Maybe when she got up, if she ever did.  She looked washed out and needed some sun, or makeup.  Her blond hair was dirty, dull, flat to her head and showed dark roots.  She was still a good-looking girl, in her late twenties or maybe thirty.

Later, she makes a call:

As it happened, I read a 1993 edition of the book with an introduction from Leonard which I didn’t read until I’d finished the novel.

He explained there that AA is such an important part of the novel because, at the time he wrote it, he had gotten into the program. He had his last drink in January, 1977.

Leonard’s descriptions of the interactions between the two alcoholics rang so true as I read it that I suspected he was in AA. I’m glad I didn’t know that going in.

“As though with a purpose” 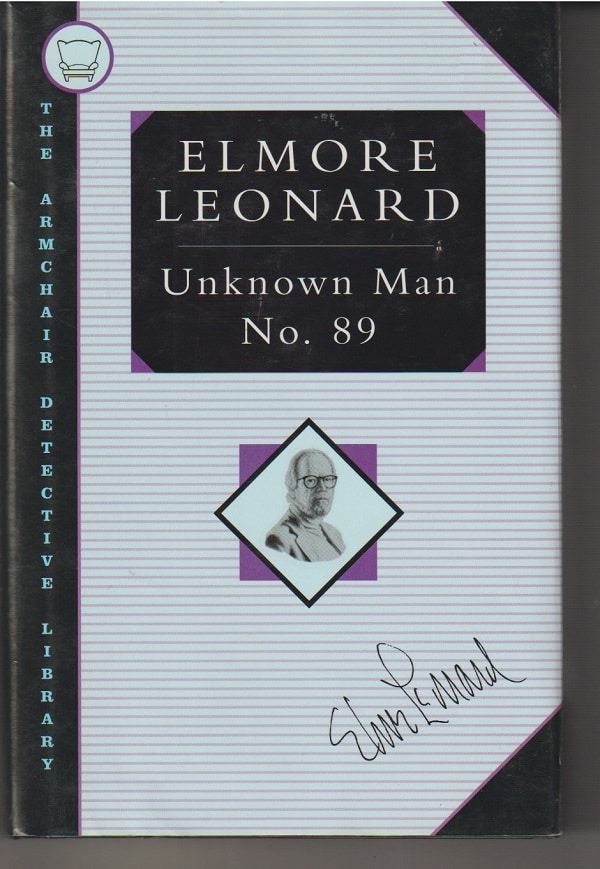 In the introduction, Leonard also wrote that he was given a tour of the Detroit morgue to get a sense of the look and feel of the place.  I don’t know if his new sobriety was responsible, but I found his descriptions of the scene visceral in a way that is rare in his other writing.

For instance, here’s how he begins his account of Ryan in the morgue:

He wasn’t ready for the first body he saw, turning a corner, walking close past a metal table, and realizing, Jesus, it was a woman.  There was her thing.  An old black woman with white hair…She was right there, her body, but she didn’t seem real.

None of the bodies did, and he wasn’t aware of them immediately as human bodies.  They were in the open, exposed, in the examining room and the connecting halls and alcoves.  They weren’t pulled solemnly out of a wall, covered with a sheet.  They lay naked on metal tray tables waiting, as though with a purpose, waiting to be put to use.

As a newspaper reporter, writing a feature story, I visited the Cook County morgue in the late 1970s.  My experience was thoroughly echoed in Leonard’s account of Ryan’s tour.

Indeed, so clearly seen and deeply felt are Leonard’s descriptions that it becomes a kind of poetry:

The autopsy assistant was at the opposite end of the tray table now.  He replaced the skull section and — as Ryan watched — carefully pulled the hair and scalp up over the skull, revealing the face a little at a time, a man appearing, features forming, as though the assistant were fitting the lifeless skull with a Robert Leary mask.

Let’s see how that scans as free verse:

was at the opposite end of the tray table now.

He replaced the skull section and — as Ryan watched —

carefully pulled the hair and scalp up over the skull,

revealing the face a little at a time,

as though the assistant were fitting

the lifeless skull with a Robert Leary mask.

Unknown Man No. 89 has a bit less comic banter among characters than most of Leonard’s other books.

Part of that, I guess, is that he’s dealing with a serious subject from his own life, AA.  Part of it may be due to him seeing some things much more clearly than he had and wanting to communicate what he was seeing.

And maybe Leonard was just happy.

Two of his characters are.  Indeed, they’re giddy with happiness.  And it’s enough to brighten any day:

They smiled as they made love.

Boy, it was good, and Ryan told her he didn’t believe it.  He said, It’s so good making love to somebody you love. Like the first time, only way better.