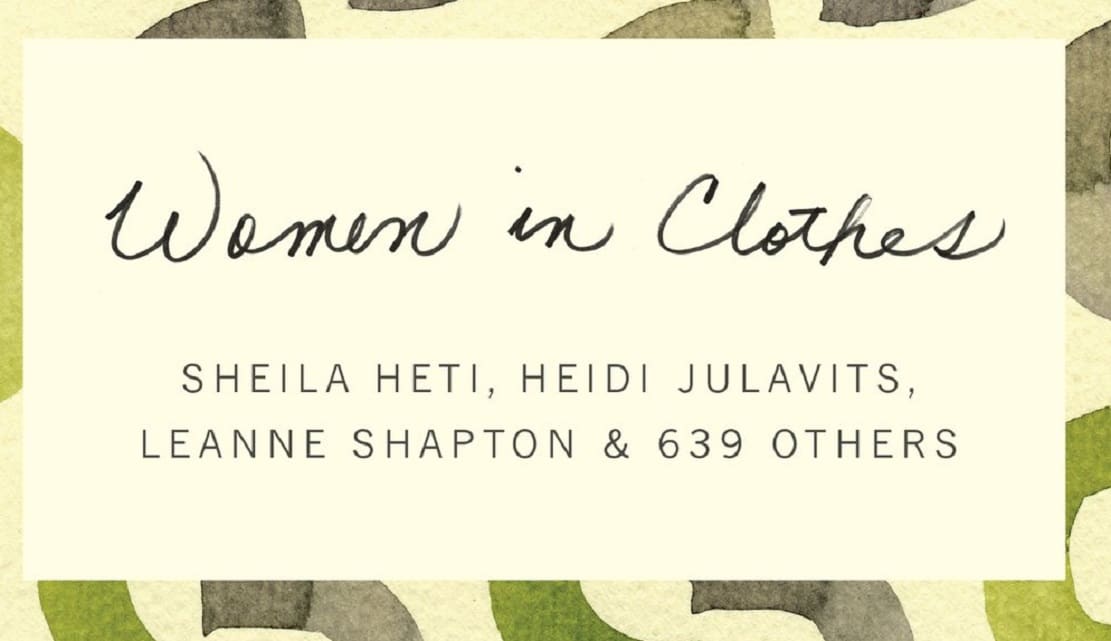 Women in Clothes is a wonderful book, a cornucopia of insights into the ever-so-complicated feelings that women have about clothing.

Although I like the idea of fashion as a kind of practical, everyday art, it’s an art for which I am without aptitude. I do love, however, to study the way human beings think and act, what makes us tick, especially human beings in groups that don’t include me.

This book provided me with a delightful and ever-surprising glimpse into the psyches of women as reflected in their clothing and their emotions about their clothing. It allowed me to listen in on literally hundreds of women as they took part in a conversation about a subject that, clearly, is of great import to them.

For a guy, reading the book might be called voyeuristic, yet I’m a human being who wears clothes, so none of this is completely foreign to me. While men in Western society aren’t as into fashion and clothing as women (except a small percentage that includes my son David), I’m sure any guy who reads Women in Clothes would feel resonances. Guys have their own clothing issues, and all of us are close to women who deal with the joys and sorrows of dressing up or down or whatever every day of their lives.

This is a book created by English-speaking women, most of whom live in the United States, Canada and the United Kingdom. It is the brainchild of novelist Sheila Heti; Heidi Julavits, another novelist; and Leanne Shapton, an author and publisher.

They got the idea of creating a lengthy survey questionnaire and distributing it as far afield as possible. If a sociologist did this, the results would be in columns of numbers. But that’s not the book that Heti, Julavits and Shapton produced.

With the help of Mary Mann, they took the raw material of the surveys and grouped answers in interesting ways, such as several pages of comments about closets and another group of pages with comments about sisters. Full surveys from a handful of people are included, and the co-authors and their representatives go out to run the survey questions past women in specialized jobs or from more esoteric backgrounds.

In all more than 600 women were involved in the project and listed in the 15 pages of contributors. There were also about a dozen men, either men who were into women’s clothing as transgender people or as transvestites or men who were just helping out with the interviews.

Every few pages or so, there is one page with photos of the collection of a clothing item of one women, such as Andrea Walker’s floral print shirts and Dorothy Platt’s wrap skirts. In addition, there are odd and interesting sections, such as 15 pages of photocopies of the right or left hand of women in a newspaper office with comments from the women about the rings they were or weren’t wearing.

The survey asked a respondent to provide a photograph of her mother before he respondent’s birth, and these photos along with the comments of the daughters were, for me, the most touching sections in the book.

The authors work hard to achieve some diversity. Nonetheless, the women who took part in the survey tended to hold white collar jobs or engage in creative careers, and to live relatively comfortable lives. This doesn’t seem to be a major drawback, however. The sense I have from having a lot of sisters and from watching women all my life and even knowing some pretty well is that clothing is important to women, no matter the education level or the socio-economic standing.

There is a kind of wonderful chaos to Women in Clothes despite the many ways in which it’s organized. It’s the chaos of hundreds of voices, and they are a wonder to listen to.

Here are a few:

When my dad was dying, I dressed up like I was going to work every time I visited him. Somehow being presentable in that situation gave me a sense of dignity and respect for him that made me feel strangely like things were a little under control.

Recently, I’ve started to consciously dress in a more “professional” manner when I attend prenatal appointments. I noted that when I was dressed in my usual casual summer style, I was treated like a helpless teen mother. I was talked down to and about as if I wasn’t in the room. I had to fight to have my questions answered. I’ve since made the switch to dressing as though I’m coming from an office, and I find that I’m spoken to more directly and as though I may have done my research. I resent having to do this.

My closet is like a museum. Everything is in its place. I arrange my tops by sleeve length (spaghetti straps, tanks, short sleeves, quarter-length, long sleeves). The dresses follow and are arranged in a similar order. Skirts follow dresses, short to long. Once this system is in place, I organize each top by color of the rainbow. It helps me keep track of my clothes. I know when a friend has a piece of mine or something is in the dirty pile. It also helps me when I’m half awake in the morning, trying to get ready for work in under ten minutes.

People find it very difficult to just show me things without telling me stories — every item has a story. If I’m talking to an older woman or a mum, she’ll start telling me a story and I’ll say, “I’m sure your daughters would love to hear that, or your sisters…” By holding on to the thing, they are keeping the story to themselves rather than sharing it, so one of the things I encourage people to do is write the stories down or record them or find some way of documenting them so the story is not lost, while the thing can be given away to someone who’s actually going to make use of it.

About this photo of her mother Mildred Wolsky Stenbock, Jeanie Kimber writes:

I see a beautiful woman who spent her life completely unaware of that fact, who was as uncomfortable with her height as she was with the rest of her body.

About this photo of her mother Frances Strauss, Sarah Steinberg writes:

When I asked my mother about this photo, what she remember best was her car, which she was very proud of owning. It was the seventies; I don’t think anyone wore a bra. Besides that, she was very independent. In this photo she’s about twenty-seven years old. She’s almost a decade way from having me. She’s in between traveling stints and doesn’t have a boyfriend. My mother didn’t think of herself as attractive, and I think that her insecurity inhibited her a little bit, which is a shame. I think she looks very beautiful.

I also have a Mom Coat…I have very mixed feelings about the Mom Coat which is a down coat that has a hood, completely covers your ass, and is black, gay or gray-black.

The Mom Coat is a sleeping bag you walk around in. it turns you into a pod. I almost cease to be human when I wear it; I am just a shroud with pockets. And of course, because I have kids, my pockets are always stuffed with Kleenex, hair clips, Goldfish, et cetera. The Mom Coat is like a minivan in that way. You are inside and piloting a receptacle for your kids’ stuff.

Answering the question “How important is all this?” Lena Dunham writes:

Really important because no one can see me without seeing me, ya know? I feel I was put on this earth for a number of reasons, one of them being that I got the chance to see Sarah Jessica Parker in Once Upon a Mattress on Broadway in 1997. But the biggest reason is to help normalize a certain kind of body (and, therefore, all bodies) and the accompanying concerns. So even when I want to look beautiful, I want to look like myself. Even when I am uncomfortable, I want to look comfortable.

Answering the question “Are there any tricks that make you feel like you’re getting away with something?” Sheila Heti uses a phrase from her diary:

For me, the more I care, the worse I look.

When I’m sewing seams, I always think that these jeans must be very expensive; they cost at least $40 or $50 per pair, and I’m wondering how those people afford those expensive jeans while my salary is so small. I sometimes wonder how I could ever afford them. They look beautiful, and I think how beautiful I would be if I wore them. Once I met an official from a clothing company and they told me that the jeans they wore cost $120. Sometimes we feel like our hearts break, because the Chinese staffers and superiors at our factory will tease us. They’ll say that our salary is not worth a pair of their shoes.

Ly Ky Tran, a Vietnamese immigrant who worked as a child in the family apartment in New York City making clothing, says:

What’s interesting about our experience, and I feel like very few people talk about this, but as children, we never thought our lives sucked. Even when we were starving, it was never like, “Oh my god, we’re starving,” it was just like “Oh, there’s just some rice, okay.” I mean, we were children, and everything was magical. We made games out of everything. Even when it was 2 a.m. and we were making up these cummerbunds, we might sing songs to each other.

Answering the question “When do you feel the most attractive?” Lucy Birley, a former model, says:

When I’m in the country and I get up in my nightie and go out on a summer morning with my gun and shoot rabbits. I love that combination of being in a nightdress and having a gun.

The first outfit I remember clearly is the polka-dot dress I wore to the hospital when my sister was born.

I was running late; I didn’t have time to comb my hair. I thought the huge knots wouldn’t be obvious, but then I also forgot a hair elastic to bundle the mess into a bigger mess on top of my head. We ate dinner. After dessert my friend — who was sitting at the opposite end of a long table — stood up and said, “I can’t stand it anymore! I can’t stand looking at that bird’s nest in your hair!” She grabbed a brush and sat next to me. She isolated the biggest knot cluster and said, “Hold this!” She worked her way around my head while the rest of us talked about whatever we were talking about. I felt ashamed, happy, infantilized, adored.