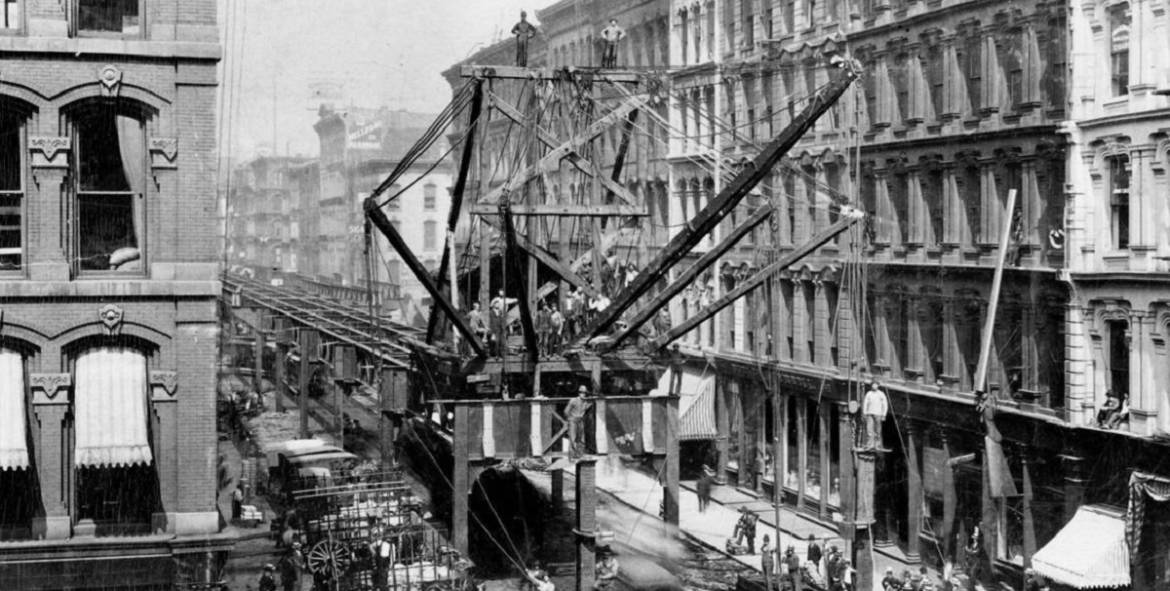 Chicago History: Building the elevated Loop with trickery, brilliance and sheer will

A young Charles T. Yerkes, a decade or more before he built Chicago’s elevated Loop

Chicago’s elevated Loop, completed 120 years ago on Oct. 3, 1897, was the product of the audacious resolve of financial manipulator extraordinaire Charles Yerkes.

To get the Union Loop, as it came to be called, built, Yerkes deceived, deluded and out-smarted his opposition. He played his foes off against each other. He gambled and blustered, and employed elaborately complicated money schemes that no one’s ever been able to figure out completely.

Yerkes willed the Union Loop into existence, reaping huge profits and, even more important, bestowing onto Chicago a steel structure that has been a civic anchor for more than a century.

The idea of a downtown terminal for the use of the city’s four elevated lines was endlessly discussed during the early 1890s, but it wasn’t until Yerkes made his move on Nov. 22, 1894, that it began to inch toward reality.

That was when, backed by a crowd of ready investors, he incorporated the Union Elevated Railroad Company with the goal of erecting a union loop downtown. Triumphantly, the Tribune announced on its front page: “The Gordian knot has been cut. The question of an elevated railroad terminal is settled. There is to be one terminal loop and that will be used by all the companies.”

The story’s headline was “Sure of an L Loop,” and one of the subheads praised Yerkes: “His Master Hand Brings Together Various Interests.” Another subhead — “Chicago Elevated Terminal Question Solved at Last” — indicated how excited Chicagoans were that elevated service downtown had moved a major step closer.

Over the next three years, some writers attempted to call the new terminal something other than a loop. For instance, there were odd efforts to refer to the structure as a “parallelogram” or even a “quadrilateral.” In fact, the right-angled, four-sided loop as planned by Yerkes was a rectangle (a kind of quadrilateral), but, strangely, this was one term never applied at the time.

Also, although it’s difficult to tell today, the Union Loop wasn’t built as a single structure.

For each of the four sections, Yerkes had to win the approval of property-owners, and, usually, that meant paying them a certain amount based on the frontage of their property along the route — payoffs that the courts had said were illegal although no one paid much attention.

Money, though, couldn’t buy everyone, and Yerkes faced his greatest challenge when he went head-to-head with one of the most powerful men in Chicago, Levi Z. Leiter. And Leiter, once a Yerkes ally, was hopping mad.

For several years, the expectation had been that the southern section would be along Harrison Street. But, in October, 1895, Yerkes pulled a switcheroo and decided to use Van Buren Street instead.

It seems clear that Leiter didn’t want the loop structure along Van Buren for fear that it would hurt the value of the Second Leiter Building, the jewel of his extensive downtown real estate holdings. Publicly, though, he argued that property-owners on the street didn’t want trains roaring overhead.

In addition, Leiter was one of many who believed that the central business district would expand down to whatever was established as the southern line of the loop. If Harrison were the southern portion, business would gravitate to an area that had been off the beaten path, and Leiter’s son Joseph who owned property nearby would benefit.

Won by changing the rules

Although seemingly behind the eight ball, Yerkes won his war with Leiter by changing the rules of the game. He enlarged the playing field, guaranteeing his victory. Here’s how:

Ostensibly, the Union Consolidated needed that extra distance because, in addition to building the southern section of the Union Loop, it was supposedly going to build a link from the loop to the Metropolitan elevated line at Halsted Street.

In fact, Yerkes never planned to build that link. But, for the purpose of winning frontage consents, he joined the two projects on paper into a single plan — an elevated line from Wabash Avenue to Halsted Street, a distance of a little over a mile.

Leiter had locked up most of Van Buren between Wabash and the western edge of the loop, Fifth Avenue (called Wells Street today). But that only covered less than half a mile of frontage of the new longer project.

The stretch of Van Buren west of Fifth Avenue to Halsted Street was 50 percent larger, and it was filled with warehouses, railroads and factories whose owners were happy to have the Union Loop nearby and to pocket whatever payoff Yerkes was willing to make for a consent signature. Yerkes had ambushed his foes.

In mid-March when the Yerkes bombshell hit, a Union Consolidated company official said that a majority of the property-owners on Van Buren had already given their signatures, and a franchise for the four-sided Union Loop would be quickly obtained.

It didn’t happen quite that fast, however. Yerkes submitted his request for a franchise in mid-April, but it took months to win the go-ahead from the city. The reason: A city demand for greater annual payments for the use of the loop.

Yerkes was demonized in his lifetime and ever since as a money-grubbing capitalist which he was. But he was also an urban visionary.

Yerkes wouldn’t hear of it, and he dug in his heels. He even went so far as to threaten to operate the Union Loop without any southern section, asserting that, “with or without the Van Buren street link, the Union Loop will be ready for service within a month.” (Actually, it wasn’t until six months later that the first trains began to operate on the first portion of the Union Loop to be used, the Wabash Avenue section.)

It’s not known if Yerkes seriously considered operating a three-legged system. Even without a southern section, the three others would bring riders much closer to the central business district than ever before. So, it might have been possible, and profitable.

Eventually, on June 29, the City Council passed the Van Buren ordinance, and, following a week of negotiations that resulted in a supplementary compensation agreement, Mayor George Swift signed the bill into law on July 6.

“Such a public demand”

Although he compromised slightly, Yerkes had bargained from a position of strength. As a Tribune editorial noted: “There is such a public demand for the completion of the loop that the Mayor could not afford to exact too much and thus incur the risk of preventing altogether, or delaying, something which may be called with justice a necessary improvement.”

Yerkes wanted to move quickly, but various snags, including a court challenge by Leiter, a strike by construction workers and the Metropolitan Elevated’s bankruptcy, delayed the start of service for more than a year.

Finally, at 7 a.m. on Sunday, October 3, 1897, five or six construction workers plus the motorman and conductor rode the first train with paying customers to make the circuit down Lake Street, along Wabash Avenue, west down Van Buren Street and then north along Fifth Avenue back to Lake Street.

The Union Loop was born.

This essay originally appeared in the Chicago Tribune on 9.10.17.