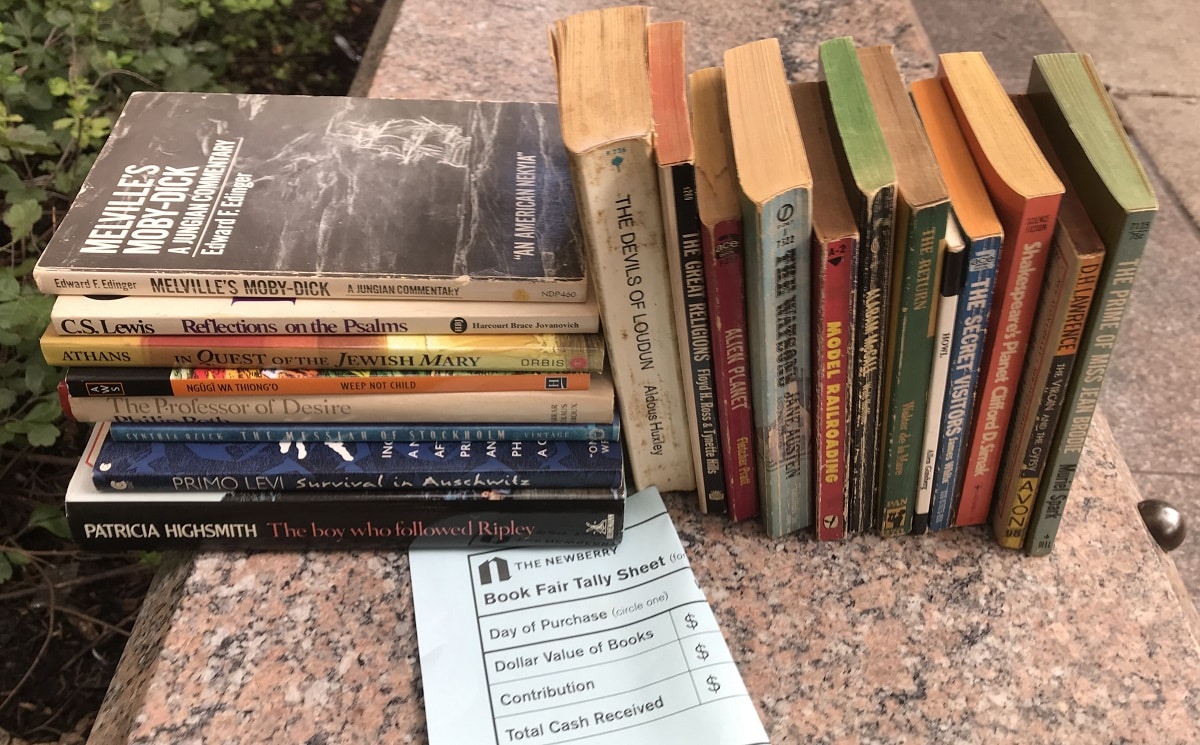 When I headed to the Newberry Library Book Fair on a Friday at the end of July, I knew I had to come up with a strategy.  It’s a locally famous sale, featuring tens of thousands of used works available very cheaply.

A kind of Nirvana for a book lover, but also a kind of Hell.  You can’t buy them all.

I set myself a limit of $30.  And I decided to focus on bargains.

As you can see from the list below, I ended up with a wide range of titles that reflected my wide areas of interest — literary works by Philip Roth and Allen Ginsberg, pulp westerns and science fiction and books dealing with comparative religion. Also, a few that appealed to me simply because of their covers.

If you went shopping at Newberry with $30, you’d most likely end up with a much different list.

At other times in my life, my list would have included a great deal of history books and biographies.  It might also have included a lot of books about Chicago, and that was the first table I hit.  Alas, virtually all of the titles there were represented on my own Chicago bookshelves.

At other times, I would have wanted to buy low-price hardcovers, but, for a variety of reasons, I was shopping this time for paperbacks.  Of the twenty I purchased, only two were hardcovers.

For any true book lover who goes to a sale like the Newberry’s, part of the fun is telling someone else about all the stuff you’ve bought.  So that’s what I’m going to do, starting now, listing the books in alphabetical order:

After a buying spree like this, there’s always the question of what to read first.  I’m finding myself drawn to Huffine’s Alabam McCall.  It’s 159 pages of what looks to be pure western genre delight.  We’ll see.

The other thing is a thought for anyone planning to go to the fair in some future year.

Because Sunday is always half-price day, if I had waited until then, I could have gotten 40 books for $30.

A slightly different version of this essay originally appeared at Third Coast Review on 7.30.22.

Sarah laughs — and other human moments

Essay: The serendipity of a used bookstore