[[[Secret book review: “P is for Pterodactyl: The Worst Alphabet Book Ever: All the letters that misbehave and make words nearly impossible to pronounce” by Raj Haldar and Chris Carpenter]]]

Emma, this book review is for you, but don’t tell your Mom and Dad.  They’d probably get all worried that a book like P is for Pterodactyl will ruin your spelling.

You know — or, at least, you will very soon — that when you see a “p” at the start of a word, the word, most of the time, will have a “p” sound there, like pig and pistachio and punctilious.

But then there are words such as pterodactyl.

I never thought of this before, but Raj Haldar and Chris Carpenter, who wrote this book, showed me that pterodactyl is pronounced the way it is because the “p” is silent.

In fact, a lot of the words they highlight in their book, playfully illustrated by Maria Tina Beddia, have silent letters, such as:

“M” and “w” are pretty straight-forward in their sounds, except when they’re silent.

But you know — or, at least, you will very soon — that “c” often will sound like “k” in cook, but sometimes it’ll sound like an “s” in circle. 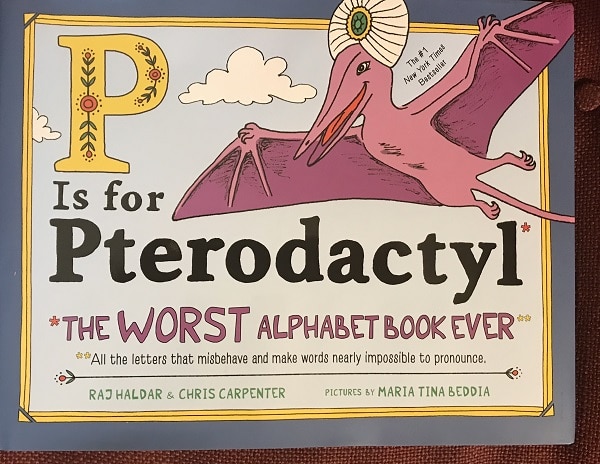 As you’re likely to guess, a lot of the silent-letter words come from a non-English language, such as gnocchi.  Other foreign words don’t have silent first letters but have become entrenched in English, such as jai alai, oui and quinoa — HIGH-lie, wee and KEEN-wah.

KEEN-wah?  I’m like a thousand years old, but it wasn’t until I read this book that I realized the words I said in my head as “quin-oa” is actually said “KEEN-wah.”

It’s not the only one.  I also learned, at this late date, from this book, how to pronounce Oaxaca (wa-HA-ka), Qatar (CUT-er) and quay (key).

Quay isn’t pronounced “kway”????  Wow, what I learned from this book!

Seven of Haldar and Carpenter’s chapters have to do with another kind of letter, a letter that isn’t used for a word that sounds like it, such as:

When I was a little kid, I thought that are and our were pronounced the same way.  What a ninny I was, right?  Eventually, I figured out that our didn’t sound like are, but it did sound like hour.

Some of the words in this book don’t fit into any other categories and seem almost subversive. Such as E for ewe.  Or S for seas (which you’d think would be spelled cees, right?).

The fun of using English

All of this hints at how much fun it is to learn and use English.

The pronunciation of English words, for the most part, came about before somebody sat down to figure out the rules of pronunciation.  So, some words, such as wren, are very old and somehow avoided being forced to operate within the rules.  Often, that means there’s a story behind the word.  I don’t know what the story of wren is, but I’m sure there is one.

Every word has a story, and dictionaries, especially some of the more scholarly ones, tell the story of each.

English is cool.  Dictionaries are cool. And this book is cool, too.

You’re going to have fun reading it.