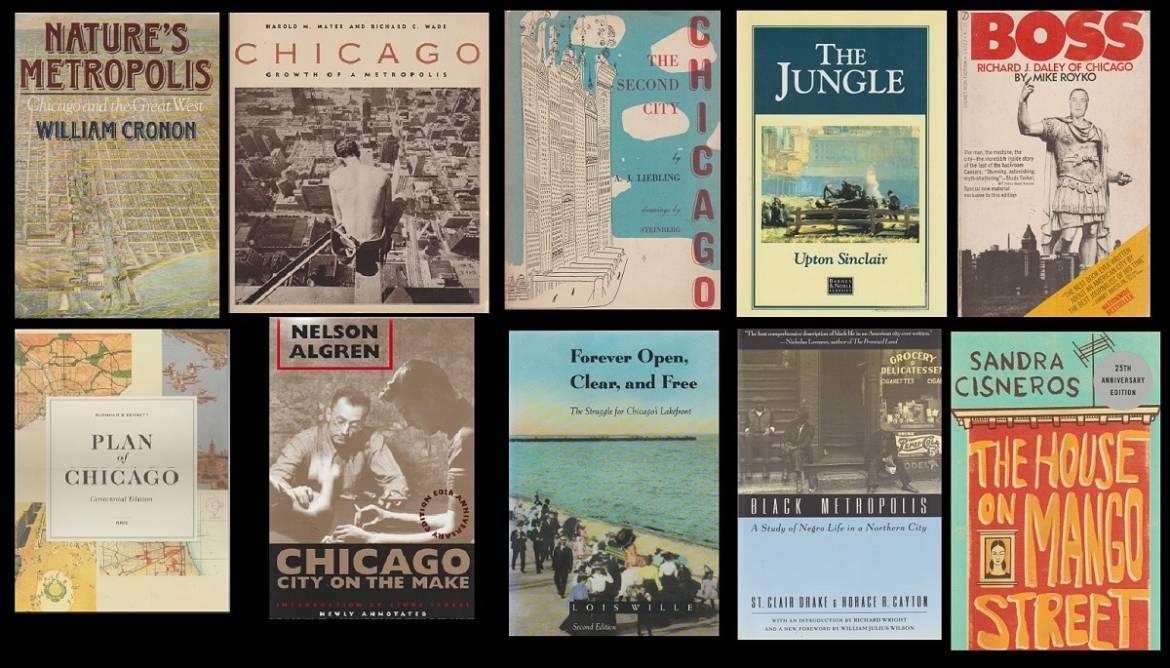 There are many very good and even great books about Chicago, and here are the 10 that I think are the best:

Certainly, at another time, I might come up with others. After all, this list doesn’t include Saul Bellow’s The Adventures of Augie March or Richard Wright’s Native Son. Maybe it should.

They know who Chicago looks…and feels…and smells. They know Chicago is a place like no other. And they know what makes Chicago Chicago.

In Nature’s Metropolis, William Cronon writes that the Queen City of the nation, the engine behind the transformation of the American landscape and economy, didn’t have to be Chicago. Had Chicago not been so successful in extending its reach toward the Rockies, some other city or cities would surely have done so, for the task of binding together the city and country was the preoccupation of the age. So, why was it Chicago? In its nearly 400 pages, Nature’s Metropolis provides literally dozens of reasons, but there are two key factors: (1) Chicago’s location at the meeting place of the Chicago River and Lake Michigan, and (2) the decision of capitalists in New York City and elsewhere in the East to invest in Chicago. And, of the two, the second was most important. Cronon writes: “Despite the booster arguments, Chicago’s location at the southwestern corner of Lake Michigan carried no automatic geographical significance. What gave the site its importance was the emerging commercial and industrial primacy of the American Northeast. An eastern-oriented economy ‘naturally’ looked across the lakes to Chicago as the westernmost point of cheap water access to the agricultural heartland of the interior. Just as ‘naturally,’ easterners saw Chicago as the logical place in which to invest funds for encouraging the flow of trade in their direction.” In other words, Chicago rose because New York had risen.

Chicago: Growth of a Metropolis by Harold M. Mayer and Richard C. Wade

Chicago: Growth of a Metropolis is one of the foundational books in the study of Chicago history. Harold Mayer was a geographer, and Richard Wade an historian. They joined together to tell the story of Chicago in a uniquely integrated way: “This volume…tries to do more than show physical development — it attempts to suggest how the city expanded and why it looks the way it does. This broad purpose explains the dual authorship, for the task seemed to require the tools of both the historian and the geographer — the former with his emphasis on the texture of life and the latter with his concern for spatial relationships. It is the joining of the land and the people that makes the city, and the partnership of two disciplines appeared to be an appropriate strategy in approaching this process.” Chicago’s region is an important concept and context for Mayer and Wade. They recognize that, despite official boundaries, Chicago is not separate from suburban Cook County and the six other suburban counties. Chicago and every other municipality and every unincorporated area within the regional orbit are deeply inter-connected. This way a reality that, at the time Mayer and Wade wrote, was easy for residents and leaders to overlook.

When Daniel Burnham agreed to take up one final great task in a life that had been filled with large challenges, he began a process that would be a turning point in urban history in the United States and across the globe. After three years of work with his right-hand man Edward Bennett and a team of artists and draftsmen, Burnham produced the Plan of Chicago, published on July 4, 1909. The Plan became a blueprint for the transformation of metropolitan Chicago. It resulted in a city that was healthier, more efficient, more beautiful less congested and less claustrophobic. But the Plan’s impact was also international. It was the first attempt at creating a comprehensive plan for a city and its region, and became a model for such documents to municipalities, large and small, worldwide. It was, writes historian Carl Smith, the single most important step in the development of urban planning as a respected profession and in the recognition that an essential role of municipal governments is to anticipate, plan for and shape the future. It is also a great piece of American literature.

Chicago: City on the Make by Nelson Algren

Nelson Algren’s 1951 book Chicago: City on the Make is an epic poem about the city. His is a city of hustlers and rested elevated structures on which trains ride through the night screeching at every turn and at every stop. He rites of the Indians who were pushed out to make way for white settlers, the first of successive waves of people oppressed by suit-wearing, clean-living brokers of power. “The Pottowatomies were much too square./They left nothing behind but a dirty river./While we shall leave, for remembrance, one rusty iron heart./The city’s rusty iron heart, that holds both the hustler and the square./Takes them both and holds them there./For keeps and a single day.”

The Jungle by Upton Sinclair

The Jungle by Upton Sinclair is a hybrid — journalism in the guise of fiction. It’s rooted in facts that are conveyed within a story that is overblown. Jurgis Rudkus and his family are the essence of powerlessness. Everything that can go wrong happens to Jurgis and his family — death, seduction, betrayal, injury, disfigurement, deception, abandonment. This wasn’t the experience of the typical Chicago immigrant a century ago. But pieces of what Jurgis went through were an element of everyone’s story. The Jungle is a metaphor for all the powerless people of the city. Which is most of us. We all know what it’s like to go up against the System and come up short. What makes The Jungle so horrifying is that we know how systems work, and how they grind up individuals. We know that was true in Upton Sinclair’s day…and in our own.

Like The Jungle, Mike Royko’s book about Richard J. Daley, the fabled Chicago may and the father of another, was the result of an intense, extensive amount of reporting.   Over the course of years, Royko interviewed hundreds of people. He examined thousands of pages of documents in obscure corners of the city’s archives. He watched and his studied his subject.   But Boss shouldn’t be thought of as a biography of Daley. It’s a book-long essay by Royko on power and its exercise. In Boss, Daley is akin to a god from Olympus. He looms over the city like a colossus. He is power, pure and simple. The essence of power. Royko, like Upton Sinclair, is writing with an Old Testament prophet’s sense of moral outrage, railing against the over-concentration of power in a few hands — and the damage that such over-concentration wreaks in the lives of everyday people.

Black Metropolis: A Study of Negro Life in a Northern City by St. Clair Drake and Horace R. Cayton Jr.

Published in 1945, at a time when African-American neighborhoods in the United States were ignored by the white mainstream, Black Metropolis: A Study of Negro Life in a Northern City by St. Clair Drake and Horace R. Cayton Jr. looked at virtually every aspect of Chicago’s Black Belt on the South Side, one of the greatest concentrations of blacks in the nation. Drake and Cayton were sociologists at the University of Chicago, and based their book on a massive amount of research that they and other students carried out under the direction of sociology professor W. Lloyd Warner. It is a book that had been called a “foundational text in African American history, cultural studies and urban sociology,” and it is a must-read for anyone who wants to understand the evolution of African-American life in the U.S. since the end of slavery.

The House on Mango Street by Sandra Cisneros

There is a universal quality to Sandra Cisneros’ The House on Mango Street and also something very specific. This is the story of Esperanza Cordero, and, at its heart, it is the story of every child who has gone through the very difficult transformation into being a teenager with all its excitement, fear and challenge. No wonder it’s read by so many high school students. Even more, though, the book’s strength as literature is that it tells the story of a unique girl in a unique place — the Mexican-American neighborhoods of Chicago. Her world is that of newly arrived immigrants and first-generation Americans, and her life is focused not only on the changes in her body but also on her need to figure out how to maneuver in the broader world.

A.J. Liebling skewered Chicago in three caustic pieces in the New Yorker, soon after collected into a short book of 30,000 words or so, Chicago: The Second City. Ever since then, anti-Liebling rhetoric has routinely found its way into print in Chicago. In 1980, for instance, Chicago Tribune columnist Jack Mabley dismissed the book as the work of “a New York writer [who] once came to Chicago for several months…and interviewed people who came into the bar where he hung out. The essays he sent back to Manhattan were filled with startling inaccuracies which comforted New Yorkers in their oneness, No. 1-ness.” Liebling was no hack, and that, in part, is why his ghost has hung for so long over the city’s psyche. And why he’s well worth reading today. His writing is lively, fresh and clear-eyed. And very entertaining, as long as it’s not your ox that he’s eviscerating. At some deep level, those who have denigrated him over the decades have known that it would have been wonderful to have someone with Liebling’s literary gifts as a fan of Chicago — as wonderful as it has been painful to endure his long-stinging words as a reporter and critic.

Forever Open, Clear, and Free: The Struggle for Chicago’s Lakefront by Lois Wille.

Chicago’s lakefront is unparalleled in the world. Twenty-six of its 30 miles are in public hands and available every day for public use, and a push is on to convert those four last miles privately owned into parkland for all. Thank Lois Wille’s invaluable history of the fight to protect Chicago’s shoreline — Forever Open, Clear, and Free: The Struggle for Chicago’s Lakefront — for the many successes that have come since it was originally published in 1972 at the beginning of the environmental movement. What’s amazing is that any city would have had enough vision to create and protect the lakefront as Chicago has over the past two centuries. Yet, Wille’s book is a bedrock account of how much blood, sweat and tears were expended in bringing that vision to life and in maintaining and improving the shoreline. Since its publication, battles have been routinely waged to stick “just one” building on the lakefront. Some have bene lost, but many have ben won. And non has taken place without reference to this wonderful and lively history.