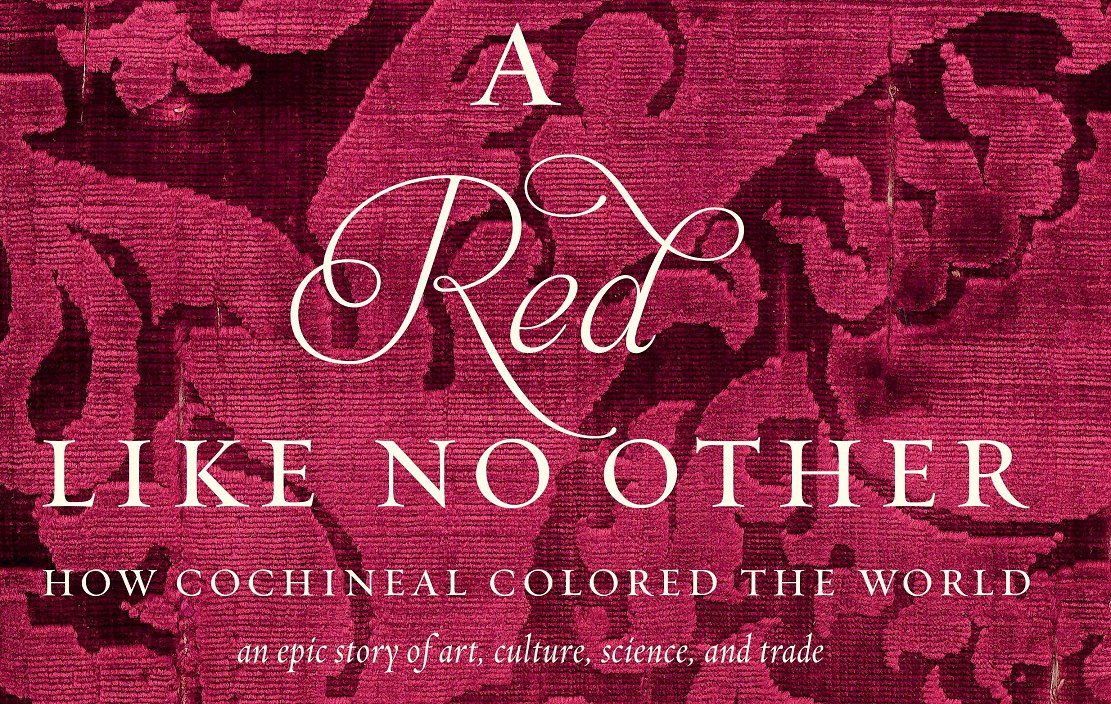 A Red Like No Other is several books in one, and that may be too many for some readers and, at the same time, not enough. I found it fascinating. It often demanded hard work from me as a reader, but it always rewarded my efforts.

It is the story of the American cochineal bug, a tiny insect that lives on a cactus and provides a deep red color like freshly shed blood that has been used as a dye since the second century B.C. The word “cochineal” is based on the combination of two Aztec words that mean “cactus blood.”

DNA research, as well as other studies, indicates that the American cochineal species originated in the Oaxaca area of what is now Mexico. From there it spread into South American and, later, across the globe.

The story of cochineal is about local and world economics, about transcontinental trade, about the rise and fall of empires, about slave-trading and the redcoats of the British army, about fashion and status, about brightly decorated furniture, about great works of Western art, about the chemistry and recipes of dye-making, about financial speculation and about elegant clothing throughout the world and down the centuries.

“American cochineal dye was widely coveted for so long,” writes co-editor Barbara Anderson, “because of its capacity to produce an impressive range of reds for animal based textiles, especially costly woolens and silks, in an age that craved such luxuries.” And also, when prepared with other elements, for paintings and other artworks.

Page through A Red Like No Other, and you’re stuck again and again with astonishment at the sumptuous full-page images of clothing made with cochineal — at the radiant beauty of a salmon silk cloak trimmed in silver from 16th-century France, a vibrant red wool surcoat from 19th-century Japan, a pair of sturdily exquisite red silk shoes with gold tracery from 18th-century Spain and the elegant haute couture Eleanora dress that designer Mariano Fortuny created in the 1930s for a favorite Italian actress.

And not just high fashion. The book similarly displays other works of great craftsmanship and art, created with cochineal, including a charmingly geometric section from a Peruvian mantle dating back to at least 1100 A.D., a Mexican chest splendidly decorated with delightful scenes from mid-19th–century village life, and a dynamic Navajo serape from about 1865 that seems almost a map of the mountains and plains of the Southwest.

That serape was created from wool that had been unraveled from blankets and other European trade goods. The Native Americans in the Southwest often did this — transmuting an item from another culture into a new object in their own.

They weren’t the only ones who took an indirect route in the use of cochineal. European artists found that the best way to use the dye was to extract it from textiles. Experiments “have shown that the color of pigments obtained by indirect dye extraction is often cleaner and brighter than that obtained using dye extracted directly” from the cochineal insect, writes Jo Kirby in an essay in A Red Like No Other.

Among the masterpieces opulently presented in the book — all using cochineal — are “A Regatta on the Grand Canal” by Canaletto, “Christ Carried to the Tomb” by Tintoretto, “Venus and Adonis” by Titian and “The Jewish Bride” by Rembrandt as well as paintings by El Greco, Van Gogh and Renoir.

For some readers, though, these hundreds of dazzling images won’t be enough. They will look to A Red Like No Other, expecting a clear, direct, anecdote-filled narrative about the captivating story of cochineal. And they won’t find it.

That book was published a decade ago by Amy Butler Greenfield, A Perfect Red: Empire, Espionage, and the Quest for the Color of Desire. Called “a page-turning, action/adventure thriller” by Booklist, it won praise from reviewers and scholars alike.

While breezy and jaunty, A Perfect Red wasn’t able to identify many items that, for sure, had been created with cochineal. Research hadn’t progressed far enough for that. But the book was an important inspiration for an intensive international effort to use all the tools of science and history to determine the presence of cochineal in a wide variety of artifacts and art works.

One result was “The Red That Covered the World,” a four-month-long exhibition of cochineal items at the Museum of International Folk Art in Santa Fe this year. After concluding there on September 13, the show will travel to the Bowers Museum in Santa Ana California (October, 2015 to March, 2016).

The work of more than 40 scholars

Another result was A Red Like No Other. It is, in contrast to Greenfield’s work, a large-format book, lavishly illustrated with some 300 eye-catching reproductions.

The earlier book had 12 images in an eight-page color insert. But what it lacked in imagery, A Perfect Red made up in its storytelling vigor.

The new book on cochineal doesn’t have that single authorial voice. Neither does it present a single narrative. Instead, A Red Like No Other is the work of more than 40 scholars who present their insights about cochineal in 32 chapters, each viewing the bug, its dye and its impact from their particular vantage point. Many of those insights are rooted in newly undertaken scientific studies, often involving chemical and other analyses of artifacts to determine the presence or absence of cochineal.

So the book lacks a narrative momentum. Yet, I found each chapter intriguing, even though, at times, I was at sea in scientific terminology that I was too much the liberal arts major to understand. An example: “Each compound is thus characterized by four analytical parameters: retention time, UV-vis spectrum, mass accuracy, and MS/MS spectrum.”

Such passages, though, were relatively few and far between. What pulled me along through the book was the realization that it was filled with detective stories. In each chapter, the writer or team of scholars was attempting to answer some question, such as the historical use of cochineal in Peru, or the techniques for developing it as a dye and a paint, or its adaptation in the Japanese culture.

A Japanese firefighter’s ceremonial coat from the 18th or 19th centuries.

These were real-life detective stories inasmuch as they didn’t conclude with cut-and-dried answers. Often, the writers used such words as “may have” and “perhaps” to indicate tentative findings. What’s clear from this book is how the study of cochineal is still in its beginning stages.

And what also comes across crystal clear is how important cochineal has been throughout the world. As co-editor Carmella Padilla writes in the forward, this book

explores cochineal’s epic story from multiple angles, including art, history, science and economics…the big impact of a tiny bug on the world’s comprehension and expression of red, connecting the power of red in history and today to the power of the pregnant, sap-sucking female insect that has fueled our red fever for almost five hundred years.

You want to know the power of cochineal? Take a run through the pages of this book. Your eyes will convince you.

This review was originally published in the Printers Row section of the Chicago Tribune on 9.20.2015. 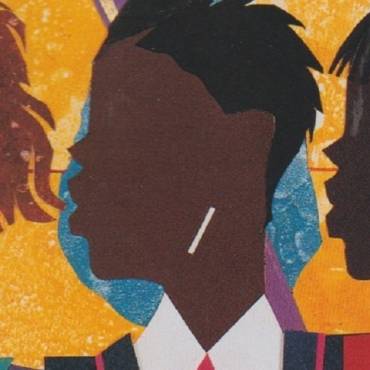 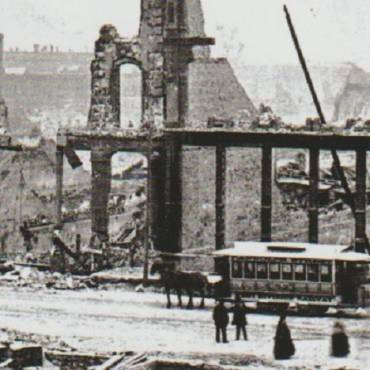 Poem: “He tossed his sin stone”