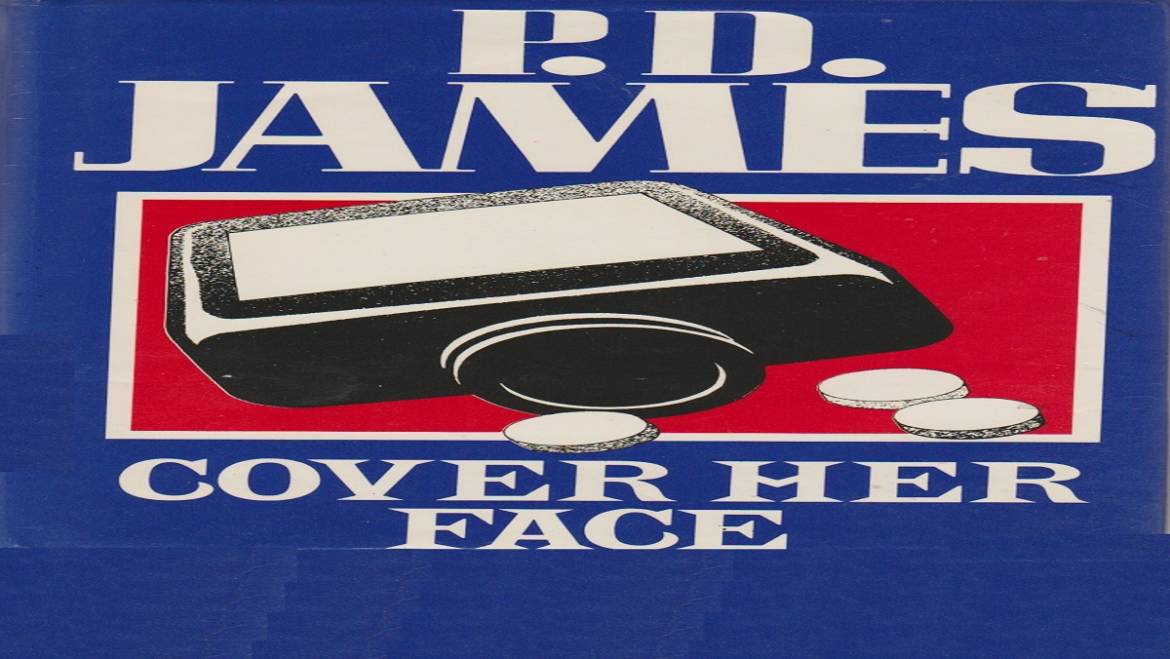 It was in 1962 that P.D. James published Cover Her Face, her first murder mystery featuring Detective Chief-Inspector Adam Dalgleish of Scotland Yard.

At the time, Agatha Christie was still the dominant voice in the field, selling millions of mysteries each year and cranking out new novels at an annual pace. In the previous 41 years, she had published 59 mysteries. Her 60th The Mirror Crack’d from Side to Side came in 1962. It was followed over the next 14 years by 13 more.

This is worth noting because, in many ways, Cover Her Face is very much of the Christie genre. There is a hothouse quality to the novel, set as it is in the rural estate of landed gentry (albeit a little threadbare). The murder victim is found behind a locked door. And the solution is incredibly complex and far-fetched.

I’ve seen reports that, later in her writing life, James said that she didn’t think much of this first effort, and there’s good reason. It’s a bit hokey in the way that most of Christie’s novels were hokey.

A novel trying to escape

Even so, Cover Her Face is a pleasure to read. Throughout, there are hints of the writer that James would become and of the novels that the more seasoned author would create.

And more than hints, really. It’s as if there is a full-blown P.D. James novel with all its gravitas and psychological nuances held under the thin and busy surface of this book’s plot, trying mightily to escape.

There is, of course, Dalgleish who impresses the mother of the estate’s family in this way:

Eleanor Maxie thought, “Where have I seen that head before. Of course. That Durer. In Munich was it? Portrait of an Unknown Man. Why does one always expect police officers to wear bowlers and raincoats.”

There are at least two Durer works titled “Portrait of an Unknown Man.” One is a chalk portrait in a Berlin museum that shows a young man with a somewhat dreamy look. Not my idea of Dalgleish, even if I had only read this book.

The other is a painting that’s at the Prado in Madrid. It shows a burger of the time, wearing a large flat hat — cocked at what, over another face, might be a playful angle — and a black coat with a rich fur collar and lapel. In his thick-fingered hand is a rolled-up piece of paper. He might seem a hard man, even bitter.

“Fix the sight of the murdered body”

But, if you isolate his face, the emotion behind it seems to be resoluteness allied with a close concentration and a complex, active mind. That seems much more Dalgleish to me.

The sort of man who is described by James as standing by the body of the murder victim:

He stood very still looking down at her. He was never conscious of pity at moments like this and not even of anger, although that might come later and would have to be resisted.   He liked to fix the sight of the murdered body firmly in his mind. This had been a habit since his first big case seven years ago when he had looked down at the battered corpse of a Soho prostitute in silent resolution and had thought, “This is it. This is my job.”

As for “bowlers and raincoats,” well, there’s nothing comical about Dalgleish as another character notes to himself:

“Adam Dalgleish, I’ve heard of him. Ruthless, unorthodox, working always against time. I suppose he had his own private compulsions. At least they’ve thought us adversaries worthy of the best.”

Unlike Christie’s Hercule Poirot, Dalgleish has no surface tics and affectations. But there are other ways through which his character is made manifest.

James mentions in passing, for instance, that Dalgleish owns a 30-foot sailing boat, a random fact, to be sure.

Yet, something deeper under his surface is revealed when, during questioning about a recently announced engagement, Eleanor Maxie asks him, “Would you wish for such a marriage for your son?”

For one unbelievable second Dalgleish thought that she knew. It was a commonplace, almost banal argument which any mother faced with her circumstances might casually have used. She could not possibly have realized its force.

He wondered what she would say if he replied, “I have no son. My only child and his mother died three hours after he was born. I have no son to marry anyone — suitable or unsuitable.” He could imagine her frown of well-bred distaste that he should embarrass her at such a time with a private grief at once so old, so intimate, so unrelated to the matter at hand.

Maybe Poirot had some similarly dark backstory, but, if so, Christie doesn’t mention it. Or, if she does, it doesn’t have the emotional power of these sentences.

“The Christian’s journey from baptism to burial”

There are other glimmers of the later, more meaty P.D. James novels.

For example, the inquest is apparently held in a school room or a room used for school (although James doesn’t make this clear, perhaps an indication of her inexperience as a mystery writer). She writes:

It was all very informal, almost friendly. The witnesses crouched on the low chairs used by the Sunday school children while the coroner drooped over the proceedings from the superintendent’s dais.

There were jam jars of summer flowers on the window-sills and a flannelgraph on one wall showing the Christian’s journey from baptism to burial in crayoned pictures. In these innocent and incongruous surroundings the law, with formality but without fuss, took note that [the victim] had bene feloniously done to death.

“A committee of morons”

Another example comes a few pages later when one of the characters, Felix, a writer and publisher, is riding in a car passing through the crowded shopping area of a rural London suburb.

The pavements were spilling with housewives who every now and then, as if propelled by some primeval urge, streamed with maddening slowness across the path of the traffic. The shops on both sides of the road had once been a row of houses and their grandiose windows and frontages were in incongruous contrast to the modest roofs and windows above.

The town hall, which looked as if it had been designed by a committee of morons in an excess of alcohol and civic pride, stood in isolated splendor bounded by two bombed sites where rebuilding had only just begun.

This acerbic description gives added richness to the character of Felix, and also shows the perceptive eye of P.D. James — and, tantalizingly, perhaps her own reaction to the scene.

From the start of the book and throughout most of the investigation, the lord of the manor, Simon Maxie, has been dying from an illness that has left him essentially comatose for years.

Then, just before Dalgleish (like Poirot) is going to have a sit-down with all the suspects and point out the killer, Simon takes a turn for the worse.

Half an hour later Simon Maxie died. The long years of half-life were over at last. Emotionally and intellectually he had been dead for three years. His last breath was the technicality which finally and officially severed him from a world with he had once known and loved. It was not within his capacity now to die with courage or with dignity but he died without fuss.

Those sentences in this first P.D. James mystery seem to capture a core element of the author’s world view and savvy understanding of human nature.

Death is not something clean. Real people die. In Cover Her Face, the thoughts and images in the minds of Dalgleish and the suspects always return to the victim and the real, absolute, clear-cut end of a life. Not for James the habit that Christie had of killing off characters as if they were chess pieces.

For James, murder is not a parlor game, even if, in this novel, she is relying on the formula of parlor-game mysteries.

It is not without significance that this book is called Cover Her Face. The title comes from the account of one of the characters about the discovery of the victim’s body:

“Stephen said very loudly, ‘Cover her face,’ but Mr. Hearne reminded him that we had better not touch anything more until the police came.”

That, it seems to me, is what the novels of P.D. James are all about. There is a natural human desire to look away or to cover up the ugliness of life — to “cover her face.”

James won’t do that. She looks at the ugliness, at the body, full-on.

And she makes sure her readers do as well.