Eight of Terry Pratchett’s 41 Discworld novels center on the City Watch of Anhk-Morpork.

In my review of Men at Arms — one of the best of Pratchett’s books — I twisted myself in word-knots trying to decide if the City Watch subgroup of the Discworld novels is my favorite, or maybe it is the Death subgroup.

Here, I can say without equivocation that I like both subgroups very much.  And that’s partly why I liked re-reading Feet of Clay which I initially read around 1999, just after I had the chance — thanks be to the Discworld gods! — to interview the gnomishly articulare Pratchett about the publication of one of his later City Watch books The Fifth Elephant.

This is a long, slow way to wander into this review, and I guess my reason is to savor the delight that this community of City Watch guards brings to me, every time I read one of the books.

Some of the other subgroups of Discworld novels were outlets for Pratchett’s silliness or his wildly rich imagination.

He used the City Watch for his rage.

Here, as elsewhere, Pratchett criticizes the role the wealthy play in making the needy needy. And the arrogance of the wealthy.  And the refusal of the wealthy to see those in need as being, well, as human as the wealthy are.

For instance, at one point in the novel, Commander Sam Vimes has just returned from the College of Heralds, the storage place for all the records of what rich person married what other rich person going far back into the past.  He has a meeting at the watch house, and then:

“When Nobby had gone Vimes reached behind his desk and picked up a faded copy of Twurp’s Peerage or, as he personally thought of it, the guide to the criminal classes.

“You wouldn’t find slum-dwellers in these pages, but you would find their landlords.”

A move to disrupt the local politics

This always gets Sam Vimes upset, but he gets particularly enraged when someone — in a move to disrupt the local politics and take advantage of the confusion — poisons the Patrician, Lord Vetinari, just enough to make him sick and cause civic instability.

There’s no love lost between Vimes and Vetinari, but, damn it, a crime has been, and continues to be, committed, and Vimes can’t solve it or stop it, and he gets, well, heated.

But then, when he goes to the poorest section of Anhk-Morpork, the neighborhood where he grew up, he finds that there has been what the wealthy tend to call “collateral damage” — a baby and a grandmother, Mrs. Easy, have died from the same thing that is making the Patrician sick.

“She just brought up nine kids in a couple of rooms you couldn’t stretch out in and she sewed shirts for tuppence an hour, every hour the bloody gods sent, and all she did was work and keep herself to herself and she is dead, Captain.  And so’s her grandson.  Aged fourteen months.  Because her granddaughter took some grub from the palace!  A bit of a treat for them!

“And do you know what?  Mildred thought I was going to arrest her for theft!  At the damn’ funeral, for gods’ sake!”

A background element to the Feet of Clay story is that an ancestor of Vimes wielded the axe that cut off the head of the last king of Anhk-Morpork, so it is kind of odd — everyone seems to want to comment on it — that, when the Patrician is made ill, it’s Vimes who is running things. 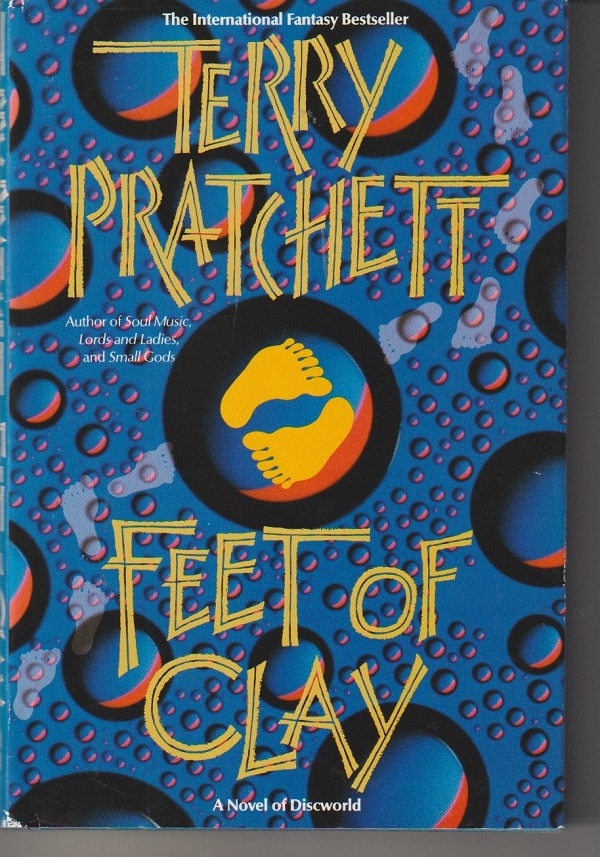 Vimes himself is no fan of royalty.  (He’d probably call them another version of the wealthy.)  But he recognizes that the Patrician, who, as everyone knows, is definitely not a king (but kind of king-like in his power), keeps a chaotic city somewhat in rein.

And, also, there’s this job he’s promised to do — to protect the city and its people who include one Patrician.

Near the novel’s end, the two men are talking.  Actually, Vetinari is talking and Vimes is listening — in a smart-alecky way.

“Commander, I always used to consider that you had a definite anti-authoritarian streak in you.”

“It seems that you have managed to retain this even though you are Authority.”

“It seems I’ve only got to be unwell for a few days and you manage to upset everyone of any importance in this city.”

In another conversation — this one between Captain Carrot and Vimes — the two are talking about a failed attempt by those who have been poisoning the Patrician to entice the now teetotalling Commander with a bottle of spirits.

“The trouble is, you know, that once the taste’s got you it never lets go.”

“Oh, that,” said Vimes.  “I was talking about policing, not alcohol. There’s lots of people will help you with the alcohol business, but there’s no one out there arranging little meetings where you can stand up and say, ‘My name is Sam and I’m a really suspicious bastard.’ ”

There is much else that is wonderfully entertaining and thought-provoking and downright hilarious in Feet of Clay, including an effort by the high and mighty to put, of all people, Corporal Nobby Nobbs on the Anhk-Morpork throne.

Of course, Nobby, an expert at survival, knows that, for Vimes, kings are anathema — and that his family has long been known for its skills with the axe — so he tells the high and mighty:

(I’m not sure what “spare” means in the jargon of Anhk-Morpork, but the implication is that the results wouldn’t be good for Nobby.)

Nobby repeats this statement several times with very slight variations as the high and mighty continue browbeating him about taking the job.

Finally, Nobby sees a window, and….

The chair rocked. Nobby hit the glass helmet-first, landed on top of a waiting carriage, bounced off and ran into the night, trying to escape destiny in general and axes in particular.