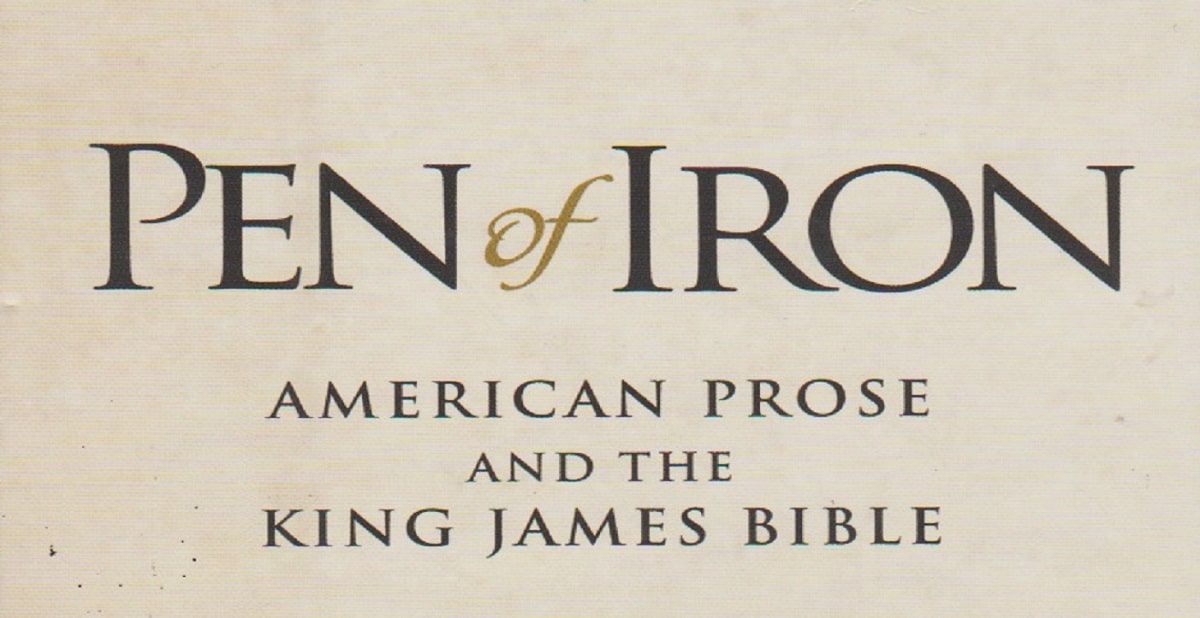 In this secular age, many writers striving to create literary works are uncomfortable with or antagonistic toward religion, religious faith and religious subject.

Yet, one doesn’t have to be a believer to recognize that Western literature and art have deep roots in the Bible, both the Hebrew Bible, also called the Old Testament, and the story of the life of Jesus and the beginnings of Christianity in the New Testament.

Every writer of the West, either directly or indirectly, creates within a cultural universe where the Bible and its ideas and its stories are major elements.

The Bible is woven deeply into Western culture, and, when it comes to the English-speaking portion of that culture, one version — the King James Bible — has had a direct and powerful influence on some of the greatest writing in the language, particularly in the United States.

“Its clang and its flavor”

As Robert Alter writes in Pen of Iron: American Prose and the King James Bible:

The King James Version was famously eloquent and a beautiful instrument for conveying the vision of the biblical writers to the English-speaking populace. Its distinctive style would in the case of many major writers, beginning as early as the seventeenth century, give literary English a new and memorable coloration.

Here it is, that old tongue, with its clang and its flavor, sometimes rank, sometimes sweet, sometimes bitter; here it is in its concise solid stamp. Other cultures have felt its impact, and none — in the West, at least — seems quite to accommodate to it. Yet we find we have been living with it all our lives.

Just as the ideas and stories of the Bible pervade Western culture, so the words, rhythms, techniques and literary aims of the King James Version have permeated American literature from the beginning.

Abraham Lincoln’s eloquence, particularly in his Second Inaugural Address, “powerfully illustrates the semantic depth and stylistic gravity that American novelists as well would often tap in drawing on the language of the King James Bible,” writes Alter.

Pen of Iron discusses the impact of the Bible on such writers as Marilynne Robinson, Cormac McCarthy and Ernest Hemingway. Even more, Alter is focused on detailing the influence of the King James Version on three great American literary works — Moby Dick by Herman Melville, Absalom, Absalom! by William Faulkner and Seize the Day by Saul Bellow.

In a book with 182 pages of text, Alter devotes 104 pages to these three works — chapters of 36 pages each for Moby Dick and Absalom, Absalom! and one of 32 pages for Seize the Day.

Each of these chapters deals in great depth on the interconnections between the Bible and the novel, at times even on a granular level. Consider these sentences about Moby Dick:

At times, biblical parallelism produces condensed but strong shocking effects in the prose. Here is a brief sentence conveying the wracking somatic anguish imposed on Ahab by his vengeful obsession with the white whale: “He sleeps with clenched hands; and wakes with his own bloody nails.”…

There is a focusing intensification from the first clause to the second, from clenched hands to bloody nails, and also a narrative progression from the clenching of the hands at the beginning of the night to the self-wounding that is visible upon waking.

As Alter points out, Melville was approaching his story with Shakespeare, Milton and the King James language in his mind and on his page. Faulkner, by contrast, eschews biblical literary techniques, such as parallelism, but roots his text in the words of the Hebrew Bible.

The recurrent biblical terms in Absalom, Absalom!…are: birthright, curse, land or earth, name and lineage, get (as a noun, an archaic term for “offspring” generally restricted in modern usage to animal breeding, which is in part why Faulkner likes to us it for humans, though the biblical “begat” also influences him), sons or seed, birthplace, inheritance, house, flesh and blood (used as both the idiomatic hendiadys, and as isolated items), bones (often in conjunction with flesh), dust and clay (both of these in the biblical sense of images for man’s mortal and finite condition).

In these cases and in Seize the Day, the novelists adapt elements from the King James Version into their personal literary style. In this long except, Alter describes this process:

Style is the great agent of transformation in the constructed worlds of novels. Melville’s Shakespearian-Miltonic-biblical style elevates the motley crew and crazed captain of a nineteenth-century commercial whaler into the indelible actors of a cosmic drama.

Faulkner’s serpentine prose, with its recondite diction and its biblical lexical keys, transmutes a Southern family’s catastrophe into an archetypal story of overweening ambition, primal sin, and the unending obsessional memory of historical trauma.

Bellow’s writing is pitched more toward making the palpability of the here and now imaginatively available. This is an aim it shares with the Hebrew Bible, though of course Bellow’s descriptive impulse is not part of the literary project of biblical writers. What he does have in common with them is a desire to present the narrative data in ways that allow them to speak for themselves, without a sense of elaborate literary mediation, without an obtrusive feeling of language calling attention to itself. I do not mean to claim that he was consciously imitating the Bible in this project but simply that he had internalized something of its dignified, even stark, simplicity of diction.

That word “internalized” is key, I think, and it applies way beyond Bellow.

When Martin Luther King Jr. gave his “I Have a Dream” speech, he was echoing, on some level, Lincoln’s eloquence which, similarly, was echoing the King James Version.

At the same time, King was directly referring back to the King James Version as well as to Negro spirituals which, in their turn, were looking back to the same Bible translation.

In other words, King and Lincoln and the writers of the spirituals had, in many ways, internalized the King James Version to the extent that it was present in their words whether the writers were aware of it or not.

The same is true for Melville, Faulkner and Bellow. Odds are they weren’t thinking: Oh, I will write this sentence to recall a similar thing in the King James Bible. Literature doesn’t work like that.

Still, the King James Version is there in their works, and, Alter argues, it’s helped lead to the creation of a particularly American kind of innovative writing with roots in tradition.

The King James Version may not be hip — even those who love the Bible know that it’s translation is in many places less than accurate or even plain wrong — but I would argue that everything written by an American, in the past and today and in the future, is rooted in some way in those eloquent, stark, sometimes jarring words initially put on the page 400 years ago.

Book review: “The Faithful Executioner: Life and Death, Honor and Shame in the Turbulent Sixteenth Century” by Joel F. Harrington

Book review: “ ‘The World of Poo’ by Felicity Beedle’ ” by Terry Pratchett with Bernard and Isobel Pearson