Near the end of Christopher Moore’s new novel Shakespeare for Squirrels, Pocket the Fool — he of two earlier books, Fool (2009) and Serpent of Venice (2014) — is caught in a pickle.  But isn’t this what happens to all of Moore’s Beta-male heroes?

He has come up with what could be a way out, but….:

I confess, a wall of worry rises for even the most confident fool when he realizes that his plot for saving the day lies with three squirrels, a troupe of earnest nitwits, a donkey-headed weaver, a silver-thirsty goblin, a notoriously unreliable narrator [wearing a hat and coat covered with wagging tongues], and a hat-shagging monkey.

That about says it all, doesn’t it?

A lot of characters

It also pretty well summarizes the main characters of the novel — except, of course, for Oberon, king of the goblins; Titania, queen of the fairies; Theseus, the Duke of Athens; Hippolyta, queen of the Amazons; Egeus, chamberlain of the duke; Hermia, daughter of Egeus; Helena, friend of Hermia; Lysander, a noble youth; Demetrius, another noble youth; Blacktooth, a top man in the city watch; and Burke, Blacktooth’s much-smarter and more blood-thirsty sidekick.

If you’re an astute reader, you might look these opening paragraphs and think:  Gee, it really seems that Moore is cramming a lot of characters into a 263-page novel.

If you’re an even more astute reader, you might respond:  Golly, that’s nothing.  William Shakespeare, the highly praised English writer, used to trot out seemingly dozens of people on stage for one of his well-reviewed dramas.

And, if you’re a very much more astute reader, you might say:  Idiots!  Moore has stolen all these characters from Shakespeare’s widely applauded 1595/96 comedy A Midsummer Night’s Dream!  Well, all except for the squirrels and the goblin and the monkey.  No monkeys in Shakespeare!  (And don’t get me started on that stupid idea of a million monkeys at a million typewriters in a million years typing the entire script of Shakespeare’s extremely well-reviewed drama Hamlet!  Does anyone even make typewriters anymore?)

What can I say?  He’s obviously a very lazy guy.

He’s so lazy he stole Jesus and a bunch of other characters from the Bible — the Bible! — for his 2002 novel Lamb: The Gospel According to Biff, Christ’s Childhood Pal.

Even so, one brilliantly perceptive and wonderfully insightful reviewer (me) wrote that the novel is “very funny and outrageous and in the worst possible taste,” and, yet, “in its own weird and wacky way, Lamb is a reverent attempt to tell and understand the story of Jesus.”

“Not your first dungeon”

Moore is nothing if not irreverent, even when he is being reverent toward his sources.

It’s not as if there is this huge comic-novel audience of Shakespeare-hungry fans, ready to gobble up anything related to the Bard.  In fact, one might wonder if that “Shakespeare” word in the novel’s title could scare away some potential readers, worried it’ll be too much like high school English.

No, in writing all these rip-offs — excuse me, borrowings — of Shakespeare, Moore is paying homage to him in his warped, wicked and loopy way, such as this scene with Hippolyta, the Amazon queen.

“Tell me the truth, fool, or the watchmen will hold you while I cut a hole in your with your own dagger and slowly walk a trail of your entrails around the room while you watch.”

“Oh, you wicked little vixen,” I said with a grin.  “This is not your first dungeon, is it?”

If she was going to kill me, better it not be dragged out, so to speak.  If she wasn’t, and was indeed as fierce as her aspect and the reaction of the watch implied, she might be amused.  This was not my first dungeon.

See what I mean?  Well, yes, it does seem more warped, wicked and loopy than reverent, but, in his odd way, Moore is acknowledging the character that Shakespeare has offered to him and extrapolating from that.

The fact is, Hippolyta and her Amazons have been conquered in war, and now she is going to marry Theseus.

Onstage, in the Shakespeare play, it seems so light and wonderful and ain’t-love-grand, but Moore realizes what’s really going on and portrays her as a woman who is being forced into this marriage (and alliance) against her will and wanting to get out of it. 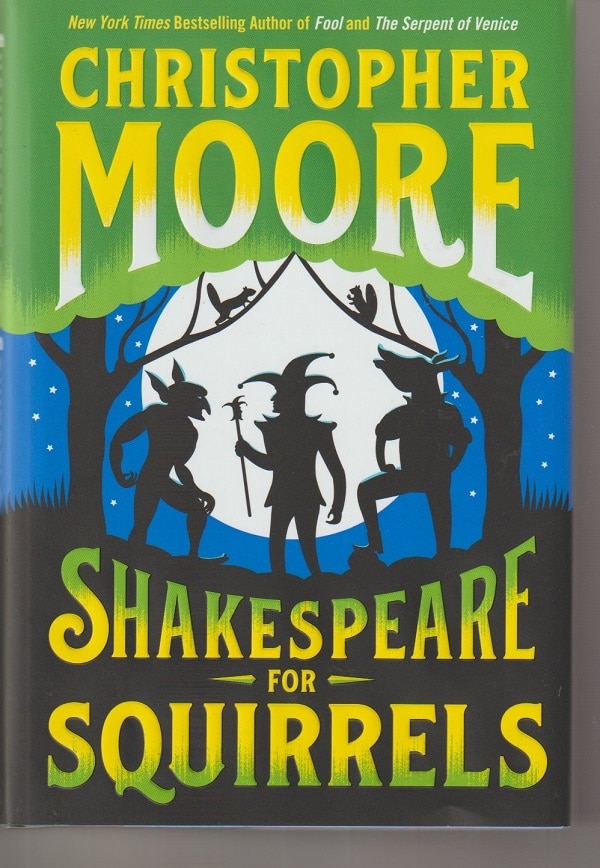 That’s also what he does with Oberon and Titania.  Shakespeare saw them as king and queen of the fairies.  For Moore, that lacked dramatic tension — and, really, what did Shakespeare know about dramatic tension? — so his Oberon is the king of the goblins, dark and machine-like things, who are, in a way, like a walking Industrial Revolution, while Titania’s fairies are what might be described as proto-environmentalists.

Oberon looked like a man built of night sky.  He was black, head to toe, but spotted everywhere but his face with silver and gold stars that shown their own light — I could see it playing in patterns on the doors behind him.  He wore a cape made of night, too, that billowed out behind him, although I could feel no wind.  His face was black, like the goblins’, but he had handsome human features, like an Egyptian statue carved from onyx….He wore wicked silver claws on his fingertips that looked as if they would draw blood with even a delicate touch.

Lest anyone think Oberon is as daunting in his intelligence as his appearance suggests, Moore relates that, while his followers are kneeling with heads bowed, the descending Oberon tells Pocket, “I am invisible.”

To which silly and dumb Emperor-has-clothes statement, Pocket and his friends say to each other, “He’s not invisible.”

And here is Moore’s Titania:

Titania, queen of the night, stepped out onto the green.  She was no taller nor rounder than the other fairies, and, but for garlands of flowers draped across her hips and breasts, quite naked.  Her skin was as pale as the moon, so pale it seemed that she might be composed of moonlight herself.  Her cape of curls was woven with flowers and fragrants …. Her eyes were emerald green and so wide it seemed she was in a perpetual state of surprise, or perhaps excitement, but definitely — as they darted around like minnows in a bucket — undeniably as mad as a fucking bedbug.

She also has trouble successfully lying — a tendency to blush when telling an untruth — a handicap made worse by her nudity. “Tits are flushing, ma’am,” Pocket tells her.

There is a reason for the title of Shakespeare for Squirrels, but, to discuss it, I will have to relate a key plot surprise, even for those fans of A Midsummer’s Night Dream.  So,

(I hate doing that, but I also hate ruining a book for future readers.)

I’m not sure there’s a delicate way of saying this, so I’ll just barrel ahead.  The thing is, Shakespeare’s fairies, including Cobweb, Peaseblossom, Moth and Mustardseed as well as all of Titania’s other attendants — well, as Moore has portrayed them, they have this sunrise thing….At sunrise, they turn into squirrels.

I have no idea what Shakespeare would think of this as a plot twist, but I suspect he never came up with it because he wasn’t as clever (or warped, wicked and loopy) as Moore.

“Unfurling new fronds as we watched”

As fairies, Cobweb, Pocket’s fairy-girlfriend, and the others have an important job in the Nature of life.  Whereas the goblins are the scary and dangerous dudes who make the forest scary and dangerous, the fairies are the ones who make seeds grow and all that life-giving stuff.   And they do it through a dancing that’s called frolicking.

Here’s when Pocket and a friend first witness it:

There in the clearing, a space as wide as a country church nave, danced Cobweb, Moth, and Peaseblossom, their bodies glowing blue in the mist, their skin sparkling as if containing the dust of the stars….The dance was free of form, like butterflies flitting on invisible breezes, the fairies moving light in leaps, with spins, even somersaults, but without the weight of whatever stuff we mortals carry…

Even as we watched, the fairies lifted in the air until their feet were only brushing the tips of the ferns and they were, indeed, floating.  The ferns and other low plants took on spectral highlights around them, as if embers of glowing ice were floating out from the circle the fairies formed….Ferns around out feet…were unfurling new fronds as we watched, even small blossoms of white and violet pushed their way out of the forest floor below.

Later in the novel, there’s an even bigger frolic involving 100 fairies, and Pocket is emotionally and physically moved — and confused.

My muscles and mind sang with the power of it, the life of it.  These creatures turned the tides, made the trees blossom, the mare foal, clouds grow fate with rain, lightning crack the sky — these creatures, more than men, together made a god, brought the glory of nature to the now.

But still, fucking squirrels at dawn.

One of the Rude Mechanicals can’t believe such reports, and, when he meets the fairies in their squirrel incarnation, he berates the short-statured Pocket whom he refuses to accept as a human and whom he asserts is a lying elf.