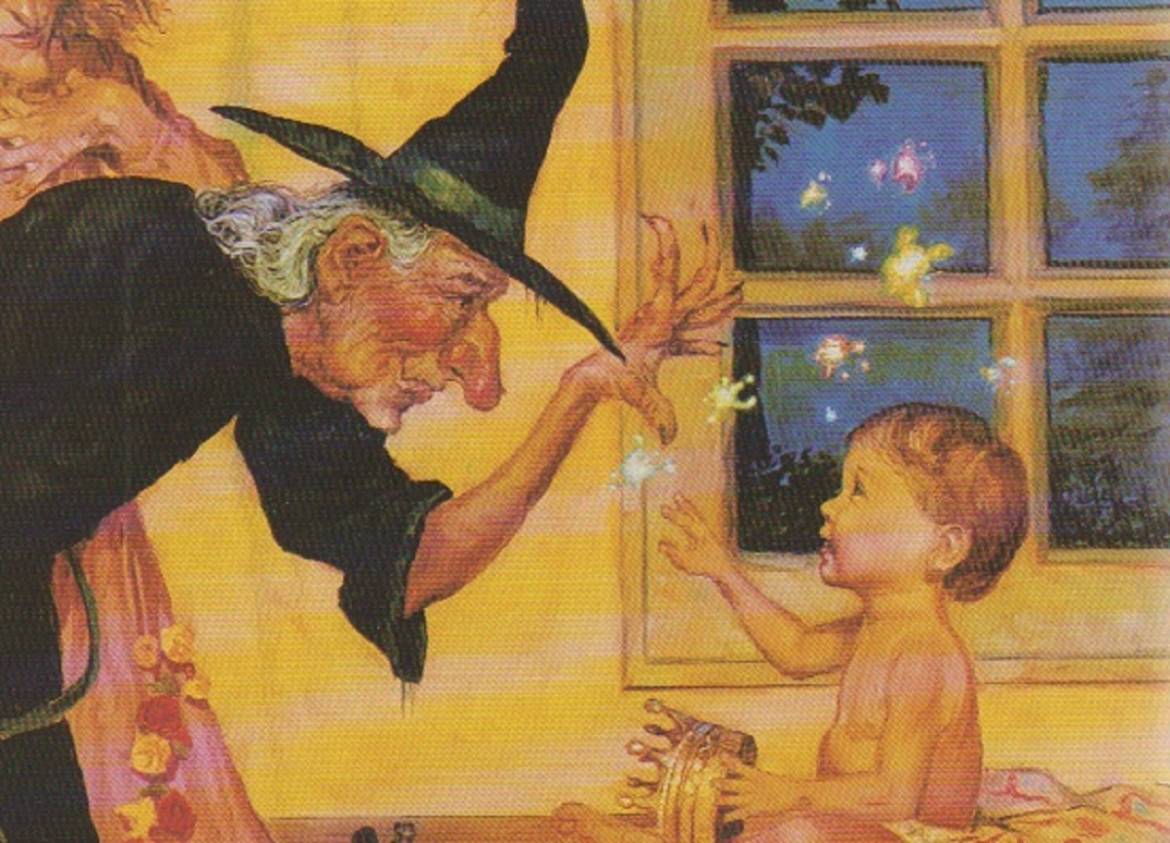 That great and silly American writer Christopher Moore, in recent years, has mined the Shakespeare canon for sources for his comic novels.

You could call this thievery.  Or you could call it homage.  Either way, the results are hilarious — Fool (a rip-off, excuse me, homage to King Lear) and The Serpent of Venice (Merchant of Venice and Othello).

(And, after all, the great Will stole all his plots from earlier writers, right?)

Two decades earlier, that great and silly English writer Terry Pratchett did the same thing in Wyrd Sisters.  This 1988 novel borrows a lot of the plot of MacBeth.  It’s got an evil Duchess to play the Queen part, and a Duke who takes the hand-washing bit way too far.  There’s a forest that moves, and a murdered king, and an unexpected heir.

And, like many a Shakespearian effort, there are characters who are masquerading as other people. Quite a lot, actually. There’s a play within a play. And ghosts and “divers alarums” and witches.

As usual, the plot is secondary to Pratchett’s use of the story to comment on the wide world of life, such as his description of inspiration and how it affects a playwright-dwarf:

Particles of raw inspiration sleet through the universe all the time.  Every once in a while one of them hits a receptive mind, which then invents DNA or the flute sonata form or a way of making light bulbs wear out in half the time.  But most of them miss.  Most people go through their lives without being hit by even one.

Some people are even more unfortunate. They get them all…

Such a one was Hwel.  Enough inspirations to equip a complete history of the performing arts poured continuously into a small heavy skull designed by evolution to do nothing more spectacular than be remarkably resistant to axe blows.

At one point in the story, Granny, who is able to look into the thoughts of living beings, seems to be coming up against the mind of the forest — which, of course, is wacky since a forest can’t have a mind…unless it does.

Animals had minds.  People had minds, although human minds were vague foggy things.  Even insects had minds, little pointy bits of light in the darkness of non-mind.

You probably never thought of human minds as “vague foggy things,” but, once Pratchett writes that, you want to say, Yeah, he’s right.

And the mind of insects?  “Little pointy bits of light” makes a lot of sense of me.

“Every art humans dreamt up”

Death, Pratchett’s recurring character who speaks in capital letters, takes part in a play — in the role of Death.  Typecasting.

Just before going on, he ruminates about humanity’s creation of theater and all the arts:

His eyeless skull took in the line of costumes, the waxy debris of the makeup table. His empty nostrils snuffed up the mixed smells of mothballs, grease and sweat.

There was something here, he thought, that nearly belonged to the gods.  Humans had built a world inside the world, which reflected it in pretty much the same way as a drop of water reflects the landscape.  And yet…and yet…

Inside this little world they had taken pains to put all the things you might think they would want to escape from — hatred, fear, tyranny, and so forth.  Death was intrigued.  They thought they wanted to be taken out of themselves, and every art humans dreamt up took them further in.  He was fascinated.

And, then, there’s Nanny Ogg’s cat Greebo.  To call Greebo randy would be like saying the Pacific is wide.  Yet, Greebo is more than his rather prodigious sex drive.

Here’s how Pratchett describes him:

Greebo…was a distinctly unusual cat.  Most of the castle cats were either pampered pets or flat-eared kitchen and stable habitués who generally resembled the very rodents they lived on.

This cat, on the other hand, was its own animal.  All cats give that impression, of course, but instead of the mindless animal self-absorption that passes for secret wisdom in the creatures, Greebo radiated genuine intelligence.

He also radiated a smell that would have knocked over a wall and caused sinus trouble in a dead fox.