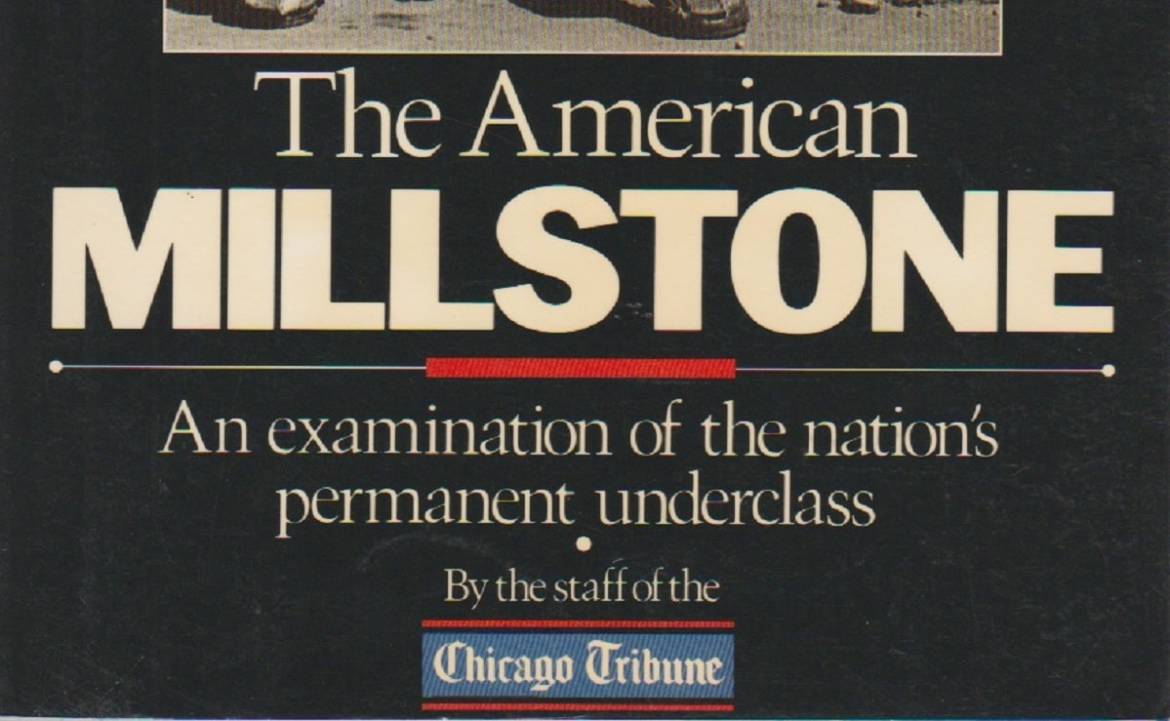 Book review: Poverty books — 1985 — “The American Millstone: An examination of the nation’s permanent underclass” by the staff of the Chicago Tribune

In the late summer of 1985, Jim Gallagher, one of my editors at the Chicago Tribune, came to my desk and told me to put everything on hold.

Instead of my normal duties as a general assignment reporter, I was assigned to write several stories as part of an in-depth investigation into the existence and implications of what was then being called the black underclass. The series was to be titled The American Millstone: An Examination of the nation’s permanent underclass.

Comprising the underclass were African-American people living in deep poverty with little or no expectation of escape. As blacks, they were limited by racism. As poor people, they were limited by a reduced access to good education and decent-paying jobs — they lacked the networks that those elsewhere in society used to learn about and take advantage of opportunities.

Yet, not everyone who was black and poor was in the underclass.

Distinctive about this group

What was distinctive about this group was that they lived in a subculture in which crime was a threat and, for some, an occupation. It was a subculture in which many sought escape through drugs and many made money selling drugs. Indeed, many engaged in a wide range of crime, including prostitution, to pay for drugs.

The most pernicious thing about the housing was that, because of historic racial segregation and official government policies, it was tightly confined in the same few neighborhoods. While the civil rights movement made it possible for working-class and middle-class African-Americans to flee these ghetto slums, the poorest of the poor, especially those afflicted with other problems, were left behind.

The result was a concentration of not just poor people, but poor people with a host of issues — what some social scientists call “pathologies” — such as suffering from a drug-addiction, carrying a criminal record and heading or living in a one-parent household.

These communities were hot-houses in which a devil’s variety of social problems festered and exacerbated each other. It was hard enough to be poor and black, but it was harder still if you were also hooked on narcotics or the victim of crime.

One of those social problems was education.

The school system wasn’t designed to teach kids who came from homes with such myriad problems. The children arrived at school without the earlier training that working-class and middle-class youngsters did.

The teachers were often overwhelmed trying to keep order in the classroom and, even more, weren’t sure what to teach the children to help them later find work as adults.

In past generations, many of these children would have been able to look forward to factory job and other blue-collar employment, but, by the mid-1980s, most of those jobs had fled the ghetto, and even those elsewhere in the metropolitan region were rapidly disappearing.

Unlike the poor in other eras in the U.S. and around the world, this community was supported by government programs that helped to keep body and soul together through monthly allotments, known as welfare.

This kept people from starving or dying of exposure, but, according to conservative critics, it bred a dependency on the government check and an aversion to seeking work.

Complicating this was the two-headed coin of black pride, one of the key results of the civil rights movement. While the black-is-beautiful effort beefed up African-American esteem, it was also blamed for the unwillingness of some members of the underclass to accept low-paying jobs.

A reality the nation needed to address

The term “underclass” isn’t heard much today. It was never a very clear term in the sense of defining a group through numbers and demographics. Social scientists, for instance, were never able to agree on how many people were in the group and how long they stayed in the group.

It was clear, though, that there was some large cluster of people who were knee-deep in poverty and other social ills and who weren’t in a position to ever change their lives.

This was a reality that the nation needed to address — people whose lives were being wasted and who, through welfare payments, law enforcement and incarceration, were costing tens of millions of dollars in tax money each year.

A lot of what I’ve sketched above is what I learned in the crash course I went through in researching and writing six of the thirty-one stories in the American Millstone series and contributing to three others.

But it’s also rooted in a great deal I learned over the next three decades during which I wrote hundreds and hundreds of stories about the problems of poverty and those caught in its deepest traps — including my role as a leader of teams that conducted an in-depth investigation of Chicago’s public housing (The Wall, 1986) and another on public education (Chicago Schools ‘Worst in America,’ 1988).

Working on The American Millstone gave an important focus to my newspaper career as well as to my work after leaving the Chicago Tribune in 2009.

Recently, for the first time more than three decades, I re-read the series, published as a book in 1986.

Although the Tribune caught a lot of flak during the three months The American Millstone dominated the newspaper’s pages, I have to say that the stories and the series hold up.

The American Millstone was an honorable, well-meaning, courageous, insightful, accurate and important effort to look at a national problem that was confronting policymakers who were often tempted to ignore the issue or sidestep its implications.

I’ve been reading lately a lot of non-fiction books about poverty that have been written over the past century or so — including The People of the Abyss by Jack London (published in 1903) and The Road to Wigan Pier by George Orwell (1937) — and the Tribune series stacks up well in comparison to them.

“Born in a toilet”

It has the faults that are implicit in such middle-class efforts to understand the poorest of the poor.

As is often the case in such books, there is a tendency to focus on the worst of the worst. For instance, here’s the first sentence of a story about the high infant-mortality rate in the underclass:

Roosevelt McGhee was born in a toilet.

It was certainly true, and the Tribune reporters who told the sad story of Roosevelt and his mother Rosemary Gordon were making a point about the tendency of many underclass mothers, often teens, to be lackadaisical about getting adequate health care during their pregnancy.

a tiny infant, weighing slightly more than two pounds, so small that he fit comfortably in just one of his mother’s hands.

This was based on good, solid, legitimate reporting, and, for any reader, the tale of Roosevelt’s short, sorrowful life was a shocking example of the high rate of infant mortality and the causes behind it.

Similarly, the lead for the story I wrote about crime in the underclass and how it can spill out into non-underclass communities was a similarly shocking:

In 1972, it was the De Mau Maus, a gang of black terrorists who, in a five-month crime spree, killed 10 whites in robberies, home invasions and random shootings in Chicago’s supposedly safe suburbs and along its well-traveled expressways.

In 1981, it was a white 18-year-old Cicero woman who was stripped, beaten, robbed and sexually assaulted by at least seven black youths during a rhythm-and-blues concert at the International Amphitheatre, four days after Christmas.

In 1983, it was the Mahaffey brothers, Reginald and Jerry, two black men who climbed in the open bathroom window of a Rogers Park apartment, raped a 30-year-old white woman, beat her and her husband to death with a baseball bat and severely beat the couple’s 12-year-old son.

Crimes such as these, in which ghetto violence reaches out of the inner city and into the middle class, are not common. But when they occur, the frightening news stories get bold headlines and wide readership and spark renewed fears and prejudices that adversely — and unfairly — affect the vast majority of blacks, both poor and affluent, who are law-abiding.

The point of the lead was to jolt the reader into paying attention. It’s hard to get the attention of the middle- and upper-class reader for stories about poor people, particularly poor black people.

The lead was an honest and honorable effort to force Tribune readers to pay attention.

The fullness of their humanity

There are good reasons behind the tendency in the coverage in The American Millstone and in other reports about those living in deep poverty to emphasize the shocking. Even so, after spending three decades of writing such stories, I’m aware that this sort of reporting fails to see poor people in the fullness of their humanity.

Perhaps the best ones to do this were James Agee and Walker Evans in their book Let Us Now Praise Famous Men (1941). The photos by Evans didn’t seek to shock. Instead, they presented the sharecroppers of the South not as characters in a morality play, but as people with dignity, cares and honor.

Agee’s text is even more evocative of members of the Gudger and Ricketts families as complex people dealing with — and enduring — difficult challenges. His text works so well because he creates a new form of journalism to tell the story — a journalism in which he is also a character and his feelings and reactions to what he finds are also the subject of the tale.

Agee’s words are literature, and the Tribune reporters as well as others writing above poverty aren’t aiming to create art but to bring facts to the public.

I understand the need for that although I also recognize its limitations.

Though limited in these ways, The American Millstone is, nonetheless, a significant examination of the issues that were confronting the underclass and the nation in the mid-1980s. The stories in the series laid out the facts and told the stories of the people in a powerfully focused manner.

As my career of covering the issues of poverty and its related social ills unfolded over the next three decades, I was able to base my work on the grounding I received in researching and writing my stories for the series as well as on the work of my colleagues in the other articles.

And here’s the thing:

The black underclass was a national challenge in 1985. And, although usually referred to with other terms, it is still a conundrum today.

Indeed, it could be argued that it is worse today because the nation, it seems, has decided essentially to accept the underclass for what it is and otherwise ignore it.

Much has happened over the past three decades, and, at the same time, nothing has changed.

Back in 1985, the Tribune was a messenger crying out a warning about hundreds of thousands of lives being wasted.

The same is true today for essentially the same reasons.