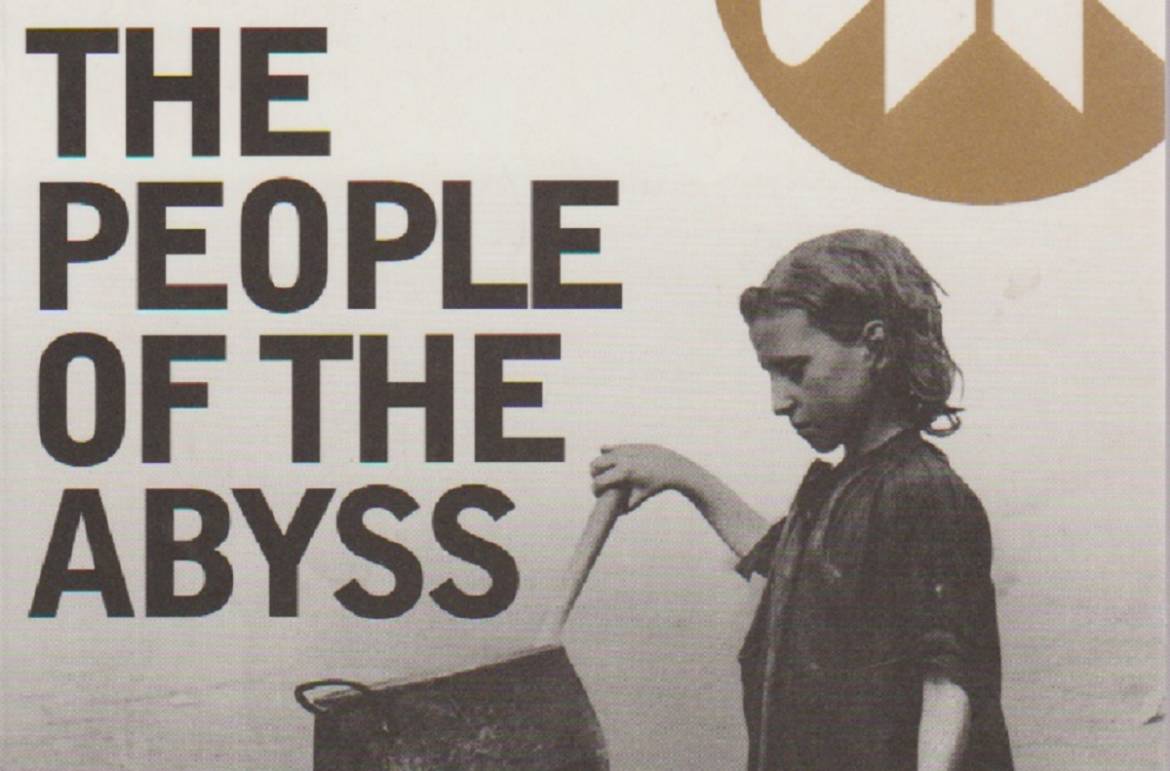 Turn to page 24 of Jack London’s The People of the Abyss, and you’ll find many of the book’s themes on display.

The American spent seven weeks in the summer of 1902 investigating — and often living — the life of the poor of the East End of London, the grandest, most powerful and most populous city in the world. Some 450,000 of the city’s 6.2 million people lived in poverty, most of them segregated in the East End. Or, as the writer put it on page 24:

At this very moment, 450,000 of these creatures are dying miserably at the bottom of the social pit called “London.”

Jack London, still trying to make his mark as a writer, had not yet produced the novel that made his reputation, The Call of the Wild. Indeed, he would start that book a few months later, in December, and both the novel and the 128-page non-fiction investigative work would be published in 1903.

As an example of those “dying miserably at the bottom of the social pit,” London lays out on page 24 of The People of the Abyss the details of the sad life and death of Elizabeth Crews, a 77-year-old woman.

Her body was found in the single room she’d occupied alone for 35 years, and it was in such a bad state that the ambulance and coachman that took her away had to be disinfected. Cause of death, according to a medical man: “blood-poisoning from bed-sores, due to self-neglect and filthy surroundings.” London adds:

The most startling thing about this little incident of a woman’s death is the smug complacency with which the officials looked upon it and rendered judgement.

That an old woman of seventy-seven years of age should die of SELF-NEGLECT is the most optimistic way possible of looking at it. It was the old woman’s fault that she died, and having located the responsibility, society goes conveniently on about its own affairs.

The righteous anger behind those few sentences — “It was the old woman’s fault…” — is an important thread that runs through The People of the Abyss.

As London sees it, mainstream society bears much fault for its lack of compassion toward these poorest of the poor and for its hard-hearted refusal to do enough to help them avoid starvation and death.

Yet, the writer, who came from a working-class background and was a well-educated man of his age, is unsparing in his descriptions of many of the poor as simply not good enough at the job of living to survive very long.

For instance, on page 24, he ends his account of spending several days hanging around with a sailor and sharing a cheap lodging house room with him, by noting the young man’s Adonis-like body:

His head was shapely, and so gracefully was it poised upon a perfect neck that I was not surprised by his body that night when he stripped for bed.

I have seen many men strip, in gymnasium and training quarters, men of good blood and upbringing, but I have never seen one who stripped to better advantage than this young sot of two-and-twenty, this young god doomed to rack and ruin in four or five short years, and to pass hence without posterity to receive the splendid heritage it was his to bequeath.

This man, London writes, is a “young god doomed” by the circumstances of his society and his own choices. He is, after all, a “young sot” as well, one how “had also hammered out a philosophy of life, an ugly and repulsive philosophy, but withal a very logical and sensible one from his point of view.” London explains:

When I asked him what he lived for, he immediately answered, “Booze.” A voyage at sea (for a man must live and get the wherewithal), and then the paying off and the big drunk at the end. After that, haphazard little drunks, sponged in the “pubs” from mates with a few copers left, like myself, and when sponging was played out another trip to sea and a repetition of the beastly cycle.

Of course, the sailor knew that, at some point, he would no longer be fit enough to be hired to go to sea, and then it would be the workhouse for him, a degraded and degrading last-ditch option that London describes elsewhere in the book. No matter what, the sailor planned to go his way alone. He wanted nothing to do with a wife and children who, he contended, would only make him more miserable. To which, London comments:

It seemed a sacrilege to waste such life, and yet I was forced to confess that he was right in not marrying…And day by day I became convinced that not only is it unwise, but it is criminal for the people of the Abyss to marry.

They are the stones by the builder rejected. There is no place for them in the social fabric, while all the forces of society drive them downward till they perish. At the bottom of the Abyss they are feeble, besotted, and imbecile.

In The People of the Abyss, Jack London is toiling to come to grips with the reality of life in deep poverty, and he falls short, which is only to be expected.

He spends seven weeks with the poor and writes his book as a clarion call to mainstream society — his society — that something is very wrong.

He does a good job of portraying the flaws in society’s system of caring for the poor. It’s not much of a system, simply the poorhouse, a throwback to the early days of industrialization. Not exactly a safety net.

He does a good job of showing the humanity of the people he meets and who befriend him. They come across to the reader as rather innocent and somewhat puzzled at the hand that life has dealt them.

He trots out statistic upon statistic to show the ugly lot of the poor. For instance, here’s one paragraph from one of the book’s final chapters:

In other words, for every one child in the middle- and upper-class West End who dies before reaching five, there are three in the East End who perish.

Where Jack London falls short in The People of the Abyss is in depicting the life of the poor as unrelentingly depressing and dehumanizing. In this, he tumbles into the same trap that has ensnared other middle- and upper-class writers who came before and after him.

Jack London and these other writers come away from their encounters with the poor with the feeling that, without the finer things of life, the daily existence of the poor must be a dread horror.

Make no mistake, as someone who met with, got to know and wrote about poor people for the Chicago Tribune for some 30 years, I know that poverty is unquestionably depressing and dehumanizing.

The amazing thing, though, is that, even so, poor people are able to laugh and sing and fall in love and cradle their children and enjoy friendships and, above all, endure with a strength of character that should provoke admiration and respect.

It seems almost silly to write that previous sentence. Of course, poor people have the full range of human emotions and experiences, despite their poverty. Yet, those outside of poverty usually can’t see it.

People like Jack London who describes the people of the East End as “feeble, besotted, and imbecile.” And also as “human swine” and as “degraded” and as “doglike” and as “wild animals” and as “gutter-wolves” and as “stunted people.”

That system left them poor. It didn’t make them “doglike.”