Essays, National Catholic ReporterJuly 6, 202170Views0Likes0Comments
I’m Catholic to the core.  I lector at Mass.  My kids went to twelve years of Catholic school. I know the smell of incense and the flickering of altar candles. I was an altar boy and, for a long while, thought I might become a priest.  I believe in the Beatitudes and the Creed.  I…

Essays, National Catholic ReporterApril 20, 202086Views0Likes0Comments
I found God in the pain of my brother’s suicide. I don’t want to tell this story again — of my brother David, wracked with pain, dragging himself out his back door at 3 a.m. with rain-snow falling, to end his life with a gun. David and I were the oldest of fourteen siblings.  He was born… 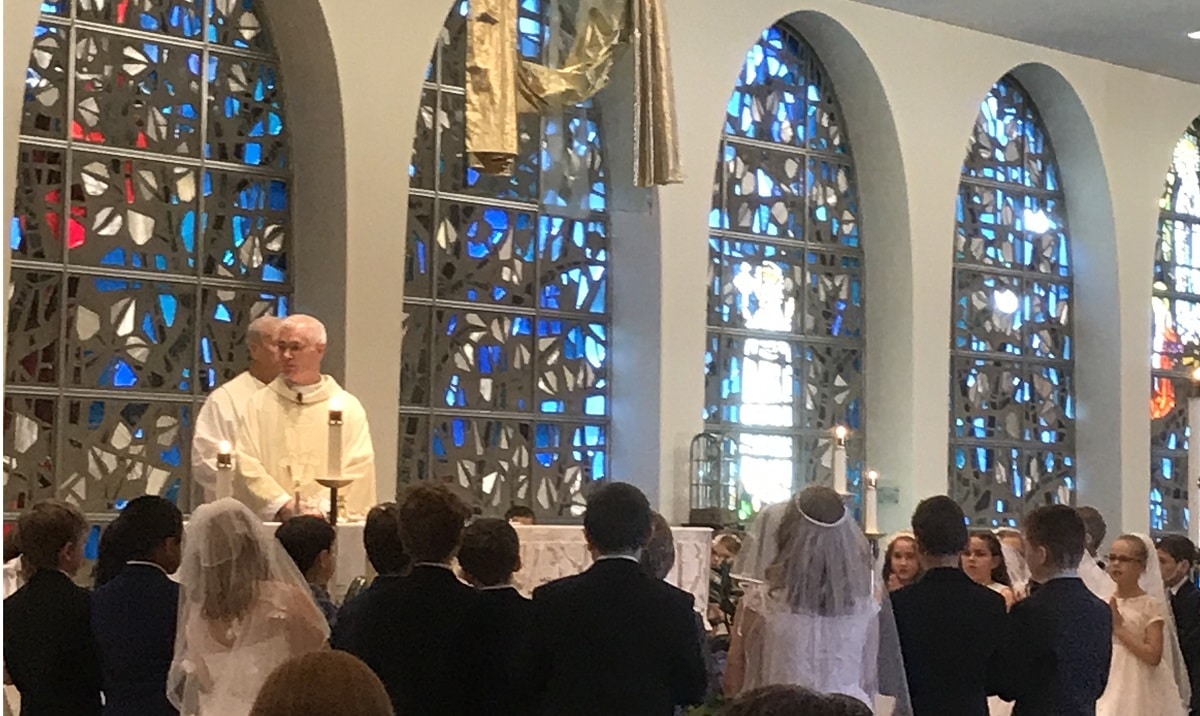 Essays, National Catholic ReporterJuly 22, 201999Views0Likes2Comments
The other day, I was at the First Communion of my great niece Maeve, and I was again struck, as I often am, by the holiness of beauty. Maeve is a beautiful eight-year-old — of course, aren’t all eight-year-olds beautiful? and holy? — and she was one of nearly sixty kids who were receiving the sacrament of the… 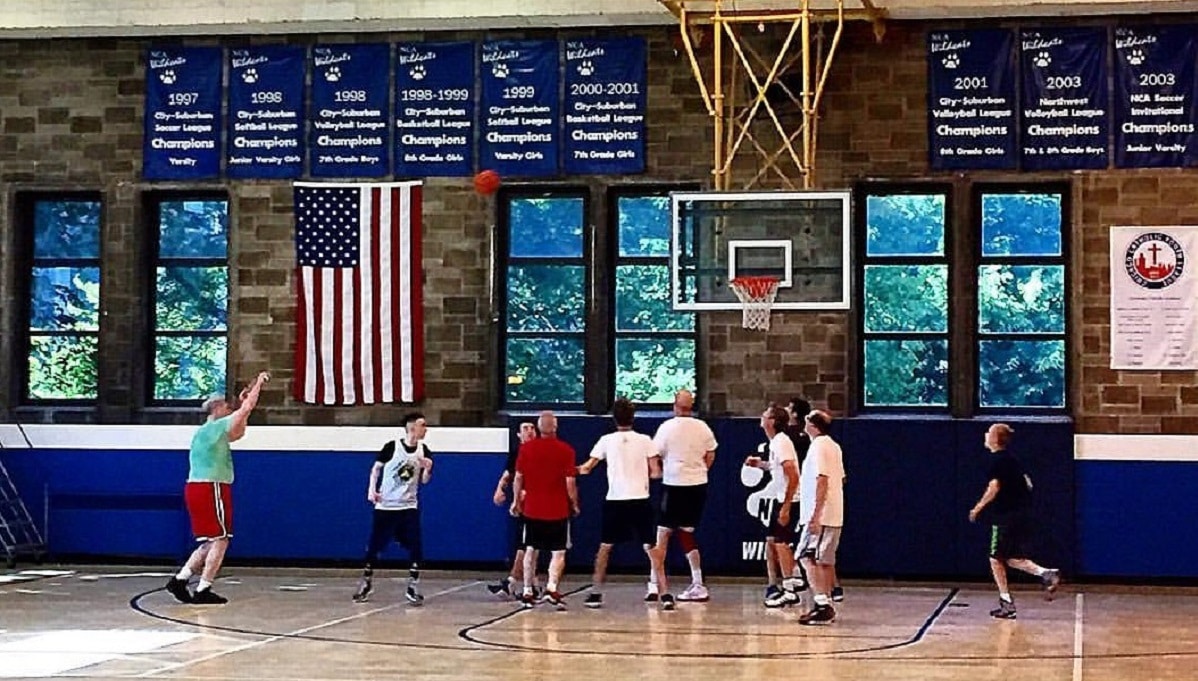 Essay: Soul Seeing — At 69, I still find grace and God on the basketball court

Essays, National Catholic ReporterMarch 27, 201942Views0Likes0Comments
The video of me playing basketball didn’t exactly go viral, but it did cause a bit of a stir among my Facebook friends.  And, later, it got me wondering about basketball and spirituality. It was during our usual Sunday afternoon pick-up game at St. Gertrude Catholic Church on Chicago’s Far North Side.  This game that’s…

Essay: God Is the Ocean in Which We All Swim

Essays, National Catholic ReporterDecember 5, 2018153Views0Likes0Comments
I have gotten to a point that I can’t go along any more with Michelangelo’s God on the ceiling of the Sistine Chapel.  Great art, but, gee, God as an old guy with a long gray beard?  No thanks. For a long time, my wife Cathy has had her own spin on this.  At Mass, when…

Essay: “God is the ocean in which we all swim

Essay: A Time to Die

Essays, National Catholic ReporterAugust 17, 2017124Views0Likes0Comments
It may seem odd today, but, at one point, a half century ago, the top-selling popular song in America was made up of lyrics from the Bible — specifically, from the third chapter of the Book of Ecclesiastes. The song, written in the late 1950s by the great folk-singer Pete Seeger, was “Turn, Turn, Turn.” It…

Dear Archbishop-elect Cupich: Eat at Burger King. By yourself. In street clothes. If you want to get to know Chicago and those of us who live here, go to the Burger King on Lawrence Avenue, just west of Western Avenue. And, as you’re eating your Whopper, watch the Mexican-American family that is likely to be eating there. The father is just off work, and you can see the weariness drip off of him. He’s got some menial job — in a factory, or as a bus boy, or perhaps in the kitchen at another Burger King. Those are jobs without much dignity in our American culture, but, with his family, he holds his head high, and his kids chatter with him with great love and respect. Listen to the two gray-haired, gray-bearded Serbian guys. Unless you’re a polyglot, you’re not going to be able to guess what they’re saying, but you can tell they’ve got strong opinions. Look at the elderly man in a tie, white shirt and dark suit. He always sits alone at one of those small tables along a wall and does a crossword puzzle. If you glance around, you’re likely to see some Asian-Americans, a homeless guy snoozing in front of a cold half-empty cup of coffee, African-Americans, at least one well-dressed person with a laptop and a cellphone using a booth as an office, young dudes with a lot of tattoos, women with unusual hair styles, and maybe some yuppies. The voice of all believers Archbishop-elect, 32 years ago, my friend Tim Unsworth wrote an open letter of advice to one of your predecessors, Joseph Bernardin, which was published in National Catholic Reporter. In writing to you, I’m following in his footsteps. Tim, who died in 2008, started off his letter to Bernardin by urging him to eat at a local deli as the Episcopal bishop of Chicago was wont to do. In my experience, though, Chicago is much more of a Burger King town than a deli town. For one thing, you’ll see a wide range of economic classes and a kaleidoscope of ethnicities and nationalities at Burger King. For another, there are just a lot more fast food places in Chicago and the suburbs than delis. Some of the people you see at Burger King may be Catholic. Others, not. But that shouldn’t matter. Coming to Chicago, you need to understand that, as the Catholic archbishop (and later as cardinal), you will be the single most visible religious leader in one of the great metropolitan regions of the world. To be sure, when you speak, you will be speaking as a Catholic. Your words and ideas will come out of the Catholic tradition and the Catholic set of beliefs. Still, in a real way, you will be the voice of all believers in the Chicago region.

Articles, National Catholic ReporterMay 18, 201463Views0Likes0Comments
If you're one of the millions of young people who are graduating from high school or college this season, I have one word of advice for you: Believe. Believe in God. Believe in other people. Believe in yourself. I'm not sure how much your education and upbringing has prepared you for the question of faith. By its nature, faith is a squirrelly sort of concept. It doesn't lend itself to test scores. A fact doesn't require belief. Abraham Lincoln was the 16th president of the United States -- that's a fact. Anything that can be proved doesn't require belief. If you put a cup of water in the freezer and wait a couple hours, you'll find the cup is full of ice. You can see it with your own eyes. By contrast, faith isn't something that's forced on you by the facts. You have a choice. You can choose to believe or not to believe. You can make the leap of faith. Or stay put with your feet firmly planted in the rational world. Here's my advice: Jump!

“Tell ’em about the dream, Martin!”

It was a moment of high drama. And Rev. Martin Luther King Jr. was trying to find his rhythm. He stood before the Lincoln Memorial to address some quarter of a million black and white participants in the March on Washington as well as untold millions of television viewers watching a live broadcast. He was giving the speech he’d written for this auspicious day, August, 28, 1963. It was formal, sober, high-minded — and more than a bit clunky. One early line was: “And so today, let us go back to our communities as members of the international association for the advancement of creative dissatisfaction.” As King came to his line, he seemed to recognize the awkwardness of such polysyllabic phrasing, historian Taylor Branch writes, and decided to speak instead from the heart. Looking up from his text, he told his listeners: Go back to Mississippi; go back to South Carolina; go back to Georgia; go back to Louisiana; go back to the slums and ghettos of our northern cities, knowing that somehow this situation can and will be changed. Let us not wallow in the valley of despair. Those on the platform with him knew he had moved off his prepared remarks, and Mahalia Jackson, the great gospel singer, shouted to him: “Tell ‘em about the dream, Martin!” No one knows if King heard her, but he abandoned his text and decided to talk about his dream. And thus was born one of the greatest speeches in world history.